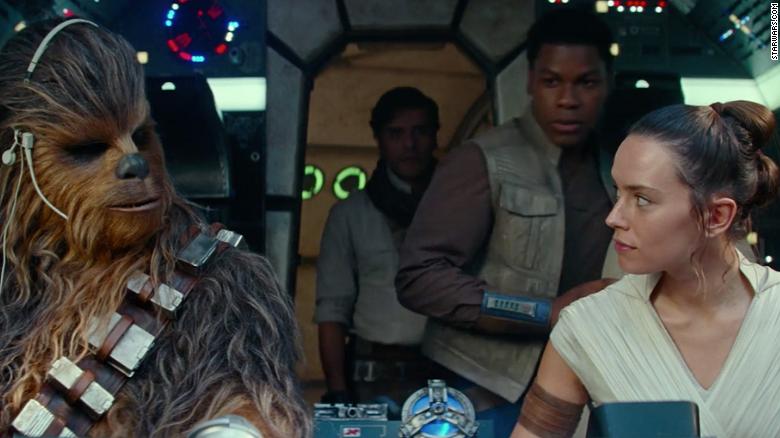 Not long after “Star Wars” rocked the pop-culture world, it was reported that writer-director George Lucas had nine movies in mind, to be told over three separate trilogies.Roughly half a full lifetime — or 42 years later –here we are, just a couple weeks away from the end of that cinematic trek.For some of us, Lucas’ galaxy has been woven into our histories. Personally, that began in 1977, seeing “Star Wars” (subsequently subtitled “Episode IV: A New Hope”) during visitation with my father, on one of our scheduled nights out after my parents separated.I can still vividly recall two guys excitedly talking behind me in line (yes, you had to line up for movies back then) who had already seen the film, enthusing about how it incorporated far more special effects shots than “2001: A Space Odyssey.”Three years later, I made plans to catch “The Empire Strikes Back” with my older brother on the second night it was out, because of a big test that day. As I have written before (and still, frankly, haven’t gotten over), a classmate actually spoiled the big “I am your father” reveal, which didn’t soften its impact, or my sense that the franchise had graduated into something much more than the first movie had indicated.By 1983, I was editing the arts/entertainment section at UCLA’s Daily Bruin, and saw “Return of the Jedi” before most of the public at a media screening. My decidedly spoiler-free review generally praised the film, with some quibbles, while whetting my appetite for such high-profile reviewing assignments once out of college, a job that would formally elude me for nearly 20 years.Lucas took an extended break before launching into the second trilogy in 1999, the year my aforementioned brother died at age 49. Among other things, it always bothered me that he didn’t live to see the next stage of the movies, a rather jolting reminder of mortality that has somewhat morbidly hovered over “Star Wars” for me ever since.

Despite various gripes about those prequels (see “Binks, Jar Jar” in your “Star Wars” encyclopedia), the decade that elapsed between “Revenge of the Sith” and the renewal of the movies with “The Force Awakens” found me again feeling like a teenager.At the same time, the fact that the movie was directed by J.J. Abrams — whose father Gerry, a TV executive and producer, was someone I knew well from covering the entertainment industry — was a reminder that I was hardly a kid anymore. (Nor was Lucas, the one-time wunderkind, who had sold Lucasfilm to Disney, and handed off the reins of the property.)When “The Last Jedi” premiered, I had moved to CNN in a somewhat different position, providing the opportunity to review a “Star Wars” movie for the first time in 34 years. Death once again intervened, this time in the sudden loss of actress Carrie Fisher and her mom, Debbie Reynolds, a reminder of what a long, strange trip it had been.So here we are, at Episode IX, which once seemed like a number — Roman or otherwise — that most “Star Wars” fans might never see. And while fan excesses have become an entwined part of this universe, that history goes a way toward explaining them, if not absolving them.The opening of “The Rise of Skywalker” comes amid some uncertainty, in theatrical terms, about where “Star Wars” goes from here, although the days of long lapses — with Disney now controlling the property — are clearly over.Nevertheless, the movie closes the books, symbolically, on a relationship that has touched five decades, which will make the last time John Williams’ signature musical score accompanies that scrolling script the beginning of the end — without hyperbole, for once — of what for many has truly been the journey of a lifetime.

No Time to Die’ Photos: Daniel Craig Returns as 007 Along with New and Familiar Faces

A proper glimpse at 007’s next mission arrived this week with the first trailer for No Time to Die. It certainly looks like a better outing for Daniel Craig than Spectre, and considering this is his send-off as James Bond, that’s good news for fans. But the movie is still roughly five months away, so we’ll have to sink our teeth into some slick official images from the movie in the meantime The new No […]