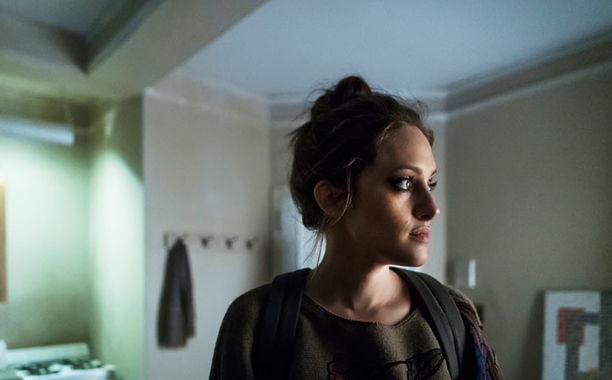 In darkness, there is knocking. We’ve heard this sound before, this kind of forceful, urgent rapping, and when we get the shot of the door from inside Elliot’s apartment, we remember the end of season 1, and the visitor that had come for him. The police? Tyrell? The man in the black hat, the agent of danger who came for him last week in a dream to torture him? Who is the one that knocks? You never know in Mr. Robot, where perceived reality is a fussy cat governed by principles of uncertainty. (If you thought that was strained, wait until we get to The Berenstain Bears theory of many possible worlds.)

Elliot sits at his desk labeling his latest hack job. “Van Halen 1984.” The knocking has his attention, but it doesn’t make him jump. He takes his time moving to the door, and as he does, the knocking turns playful. This is a flashback, all right, but not the flashback we want most, the resolution to the season 1 cliffhanger. But it’s a dynamite one all the same — a fantastic launch to an episode that gets Elliot back into fighting shape, revs the season’s story, and dials up the subversive fun. (Now if only we can dial down the length of these episode by 5-10 minutes…)

Elliot unlocks the door and opens it. We see a familiar female form wearing a familiar jacket and a familiar plastic mask. “Trick or treat,” says Darlene, rocking the Monopoly Man plastic. Her tone is chipper-sweet, as she removes the mask, we see fragility written all over her face. “Found it in the 99 cent shop in Chinatown. I didn’t know they made a mask from that movie. Did you?” What she’s asking isn’t what she’s really asking. She’s appealing to some shared history and some old communion to gain entry, to acquire his company. Darlene needs some brotherly love, a Good Samaritan, and she wants her blood brother to play the role. While Elliot figures out whether he’s strong enough to be that man, we wonder: The monopoly mask comes from a movie? What movie?

Elliot asks Darlene when she got back into the city. She doesn’t answer the question. “Well, it’s Halloween. Seeing since that used to be our thing, I thought I’d hit you up.” Elliot still hasn’t invited her inside, and she’s tired of waiting. She enters the apartment and half-feigns some hurt for his apparent lack of enthusiasm for her. Truth is, he isn’t enthusiastic, but he doesn’t have the sack to say it. Instead, he goes passive aggressive — a big theme in this episode — and tells her she’s welcome to the couch, but he’s going out. Darlene calls bulls—. She knows her anti-social loner brother doesn’t “go out.” And she needs him to stay. She pushes the button he can’t resist, the coded command she knows he won’t refuse.

Init-1. I had no idea what this meant in the moment, but here’s what the Interwebs tell me. “Init-1” is Unix jargon that refers to a certain run level or configuration of a multiuser operating system. Init-1 is single user mode. It’s also an emergency modality, and that’s the context here. She’s crashed; she’s needs some tech support to reboot. “I wouldn’t say it if I wasn’t being serious,” says Darlene. “Please. Hang out with me tonight. For real. I need this.”

Elliot agrees. And with that, the funny games begin.

Elliot knows what will cheer his sister up. “That movie.” He goes to his computer and clicks on uTorrentPlus and accesses some pirated movies. (Freakin’ hacker, destroying the media economy with his misguided entitlements. What’s next, the banking system?) He goes to an alphabetical directory — the C section. We see a bunch of movies, and if someone were to tell me that every single of them is somehow referenced in this episode, even in a small, cheeky, indirect way, I’d believe it. You’ve already heard the title of them in a line of dialogue. Here they are: Capote, The Careful Massacre of the Bourgeoisie, Carrie, Child’s Play, Chinatown, Chungking Express, Citizen Four, Citizen Kane, A Clockwork Orange, Closer, Comet, The Conversation, Cool Hand Luke, Creep, and Cries and Whispers.

A few notes about a few of these movies. 1. Carrie is the story of a special but troubled child (kinda like Elliot) with an abusive, religious mother (kinda like Elliot’s nameless mom) driven mad by marital violence (???). 2. The Conversation is a psychological thriller about surveillance, involving a mystery in which perceived reality is either misunderstood or being manipulated. 3. Comet is a romance told in flashbacks and with glimpses into parallel realities. It was written and directed by Mr. Robot’s creator, Sam Esmail. While the movie was screened at the Los Angeles Film Festival in June of 2014, it wasn’t officially released on December 5, 2014 — more than a month after this flashback.

This is weird. In Mr. Robot, a film made by the maker of Mr. Robotexists. (In this alt reality, perhaps someone else made Comet. Perhaps it was a bigger hit here, too!) But officially, the movie isn’t commercially available. Right now, in Elliot’s world, The Comet is Schrödinger’s cat, it won’t technically exist until it’s released and seen. So why is it in on uTorrentPlus? (Piracy?) I swear, stuff like this makes me think that at some point, Elliot is going to open another door and confront another person hiding behind a mask, and he’s going to rip it off and see a monkey face, then rip that face away and see his own face, and then rip that one off and see a teeny-weeny Sam Esmail inside a hollowed out head, sitting at a computer, typing furiously.

Anyway, it’s another piece of metafictional business that gets us questioning the nature of the reality we’re seeing. It’s also a bit of subversive gamesmanship in an episode with a lot of it. Who’s in control? What’s real? Who’s zooming whom? Who’s dreaming whom?

But The Comet is not the entertainment that Elliot selects for their Halloween night hang-out. He chooses The Careful Massacre of the Bourgeoisie. It’s a cheesy horror movie, dated to 1984, about a masked serial killer preying on young adult preppies at a New Year’s Eve dinner party. It’s also a slasher flick homage/parody of Luis Brunel’s The Discreet Charms of the Bourgeoisie (1972), a surreal satire of class politics that uses metafictional gambits and dream sequences and is full of delightful, arguably indulgent style. Sounds familiar. Oh, and one more thing about this movie dated to 1984: I’m pretty sure it wasn’t made in 1984, because I’m pretty sure The Careful Massacre of the Bourgeoisie is totally bogus, a fiction invented by Esmail, making it another kind of metafictional text, one more kind of reality blur. Elliot’s uTorrentPlus movie folder is basically the box in the Schrödinger’s cat thought experiment — a container holding infinite possibilities, real and unreal. 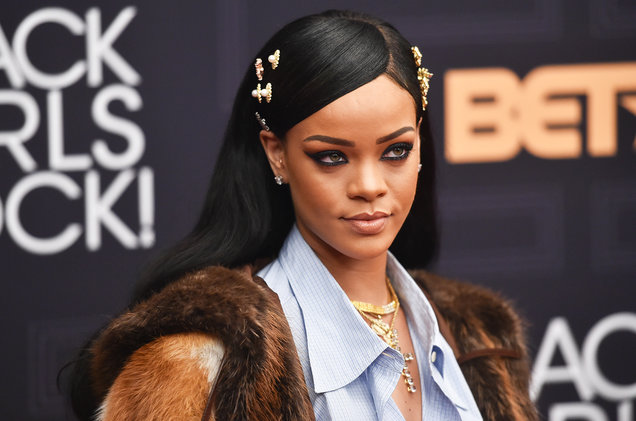 Rihanna Makes It Very Clear: No Pokémon Go Hunting at Her Shows

It's annoying enough when the person in front of you is holding up their phone and recording the whole concert. But what if they're right up front playing freakin' Pokémon Go? It doesn't fly, especially for Rihanna. In a video first posted by  Pitchfork, Rih Rih makes it very clear that people at her shows should be paying attention to her and not searching for a Tauros. "I don't want to […]