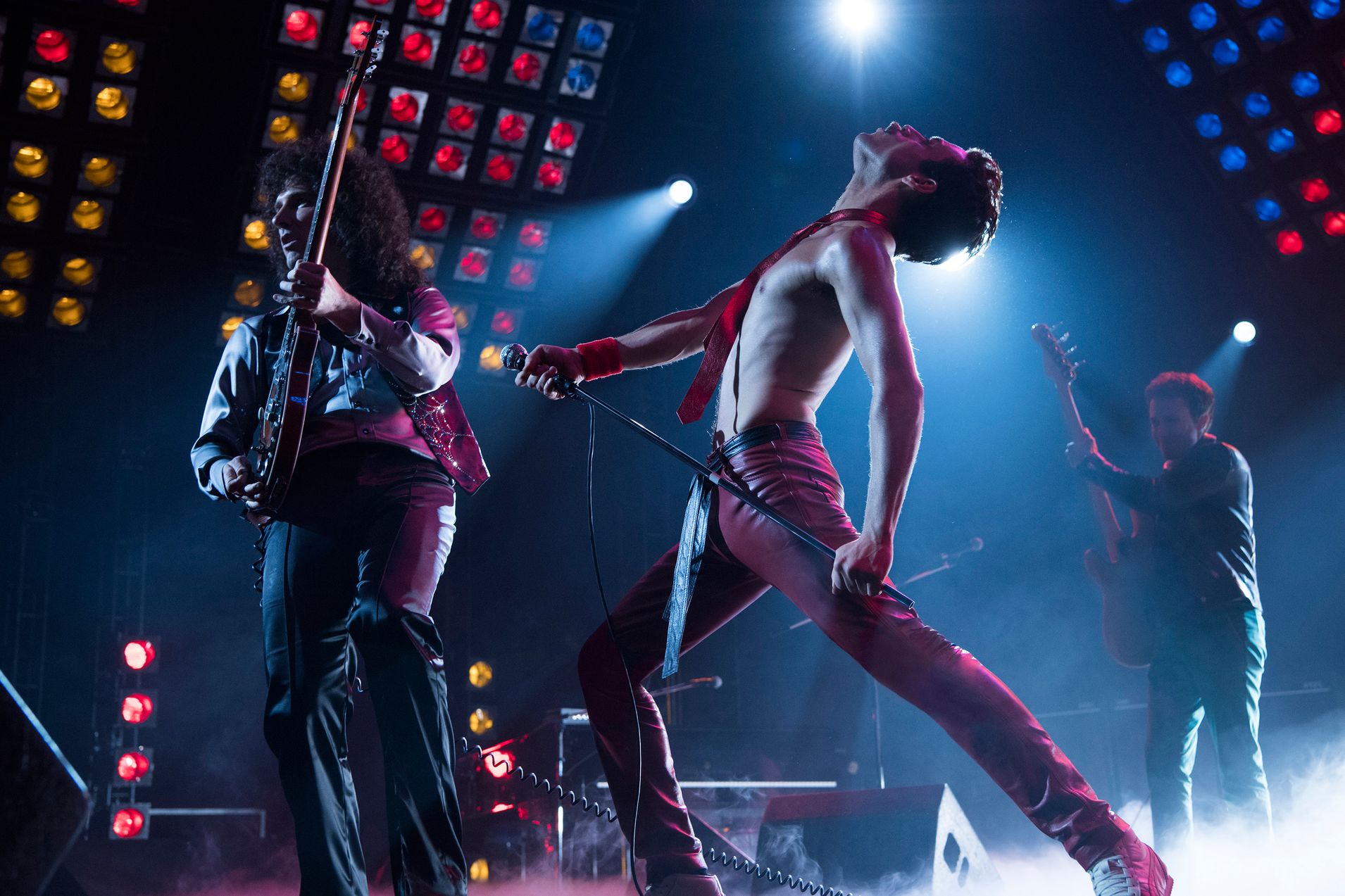 As the charismatic frontman Freddie Mercury in the long-awaited Queen biopic, Rami Malek ‘makes the role his own’.

“We need to get experimental,” says Freddie Mercury in Bohemian Rhapsody, as Queen are recording their debut album. Clearly, no one said the same thing to the people who made the film. Mercury’s long-awaited biopic may be named after Queen’s superlatively innovative anthem, but it has barely a fraction of that song’s arrogant grandeur or adventurous spirit. It looks like a daytime soap opera and it runs through the same chord progression as every previous rock biopic. In other words, some musicians get together; they record their greatest hits while wearing a succession of less-than-convincing shaggy wigs; and their fortunes rise, fall and then rise again.

Scripted by Anthony McCarten (Darkest Hour, The Theory of Everything, and other such efficient but superficial non-fiction dramas), Bohemian Rhapsody sticks to a structure that might have seemed clichéd during Queen’s heyday, and which has been unforgivable since it was parodied in Walk Hard. But thanks to its sympathetic, charismatic leading man and some of the 20th Century’s most invigorating pop music, the film just about deserves the review that was given to the group’s most memorable single, and which is quoted halfway through: it’s “perfectly adequate”.

It definitely could have been worse. The production was so troubled that the credited director, Bryan Singer, was replaced by Dexter Fletcher, so the finished film is a lot more coherent than it might have been. It introduces Freddie (Rami Malek) when he is still named Farrokh Bulsara. He has just moved with his Indian Parsi family from Zanzibar to England and has reinvented himself as a long-haired London clubber – much to the tutting disapproval of his loving but conservative parents (Ace Bhatti and Meneka Das). Not that the film has much time for family ructions. After just a few minutes, Bulsara meets a student rock band called Smile (conveniently enough, their lead singer has just quit). And after just a few more minutes, he renames himself Freddie Mercury and the band Queen.

Bohemian Rhapsody takes pains to remind us that the group’s other members wrote many of their hits – one by one, they’re given the chance to say, “Hey, I’ve got an idea for a song!” But they don’t do much else. We certainly don’t learn how or why they developed their unique combination of musical styles. Hardly ever shown separately, the non-Freddie band members turn up as a trio every now and again, struggle through some stodgy banter, and then vanish, leaving behind only a faint impression of who’s who. As far as I could make out, Roger Taylor (Ben Hardy), the drummer, is a womaniser and the one most likely to argue with Freddie; Brian May (Gwilym Lee – a dead ringer), the guitarist, is the mild-mannered peacemaker; and John Deacon (Joseph Mazzello), the bassist, is – well, all he does is smirk from the sidelines, which could be because Taylor and May helped produce the film, and Deacon didn’t.

With the help of various managers (including two played by Aidan Gillen and Tom Hollander), and various montages, the band makes the familiar journey to global superstardom, but it doesn’t seem all that global or all that super. Mercury once declared that Queen were the Cecil B DeMille of rock bands, because they always wanted everything to be bigger and better, but there is a smallness and cheapness to the film that suggests it cost less to make than one of their albums. Where’s the glamour? Where are the famous faces and the spectacular escapades? Bohemian Rhapsody could, for much of the running time, be about an indie band that scored one top-10 single.

But stick with it. With all due respect to May, Taylor and Deacon, the film improves exponentially when it ignores them and concentrates on Mercury. That is, when it stops being about some decent but dull chaps bickering about lyrics, and starts being about an outsider overwhelmed by loneliness, tormented by his sexuality and by press intrusion, and addicted to whichever pleasures could get him through the night. Alienated from the band he calls his family, just as he had fallen out with his biological family a decade earlier, Mercury is alone with his pet cats, a gang of hangers-on and a soulmate, Mary Austin (Lucy Boynton), who goes from being his fiancée to his platonic friend.

The film’s emphasis on this straight relationship has prompted much grumbling on social media. Similarly, there have been complaints about the decision to make it a mainstream crowd pleaser with a 12A / PG13 certificate, when in reality, its hero was so debauched that he could have given Casanova lessons. But these objections aren’t wholly fair. While it’s true that Bohemian Rhapsody doesn’t put much on screen that would scare off family audiences, it does acknowledge that Mercury popped pills, visited fetish clubs, threw the wildest parties in town and, after some soul-searching, embraced life as a gay man. Mamma Mia, it ain’t.

It’s also surprisingly affecting, largely because of Malek’s rich performance. Mercury was due, for a while, to be played by Sacha Baron Cohen and then Ben Whishaw. But Malek makes the role his own: he seems to be possessed by both the pouting, preening showman Mercury was in public and the sulky lost soul he could be in private. The uncanny thing is that Malek resembles Mercury more and more as the film goes on – nothing like him at the start but almost indistinguishable from him by the end. And he has such an astonishingly expressive face that he can even act while wearing an enormous set of joke-shop false teeth: Mercury may have had an overbite in real life, but in the film he has incisors to rival a cartoon rabbit.

Malek’s finest moments are also Mercury’s finest moments: when he struts across the stage at Wembley Stadium, as much of a monarch as his band’s namesake, for Queen’s career-reviving Live Aid set in 1985. The boldest decision taken by the film-makers is to include nearly all of the set. But by this point, they’ve earned the right to turn a drama into a triumphal concert video. Bohemian Rhapsody may bore you or irritate you for an hour so. But, eventually, it will rock you and it might just move you, too. 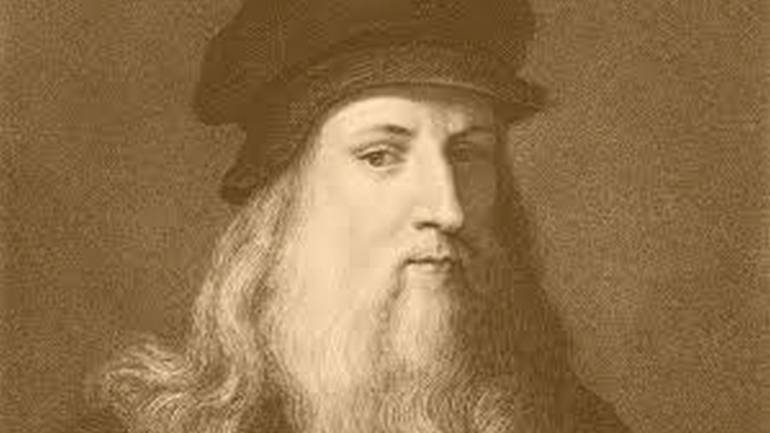 Measurements of self-inspired works show a tendency for the left eye to turn outward, suggesting the artist might have had a mild strabismus that helped him translate three-dimensional scenes to canvas. The painter, inventor and polymath Leonardo da Vinci may have had a squint that helped him capture the Mona Lisa’s smile and create his masterpieces, according to researchers. Doctors from the Optometry and Vision Sciences School at City University of London have […]