Marvel is expanding its relationship with Freeform and getting into the comedy space.

In a competitive situation with other cable and streaming outlets bidding, the younger-skewing Disney-owned cable network has handed out a straight-to-series order for New Warriors, the comic book powerhouse’s first 30-minute live-action comedy. Cougar Townand Scrubs alum Kevin Biegel is near a deal to pen the script and serve as showrunner on the comedy.

The 10-episode comedy will launch in 2018 and marks Marvel’s second straight-to-series order at Freeform. It will join drama Cloak and Dagger at the Tom Ascheim-led cable network. The latter, starring Olivia Holt and Aubrey Joseph, is not expected to premiere until winter 2018. Casting will begin shortly.

New Warriors revolves around six young people with powers living and working together. With powers and abilities on the opposite end of the spectrum of The Avengers, the New Warriors want to make a difference in the world…even if the world isn’t ready. With Freeform focused on a group dubbed “becomers” — those experiencing a series of firsts in life, including first loves and first jobs — New Warriors explores the journey into adulthood, except in this world, they’re not quite super and not yet heroes and the guys can be as terrifying as bad dates.

The series will feature Marvel fan-favorite “Squirrel Girl” (aka Doreen Green) as a totally empowering fan girl who is described as tough, optimistic and a natural leader. Doreen is confident and has the powers of a squirrel: she’s acrobatic, can fight and talk to other squirrels. Her most important trait is said to be her faith in people and ability to teach them to believe in themselves.

“Freeform’s mission is to deliver incredible content to young adults and Marvel Television seamlessly aligns with that mission — we couldn’t be more proud to collaborate with them on Marvel’s New Warriors,” said Karey Burke, exec vp programming and development at Freeform.

“Marvel’s New Warriors have always been fan favorites and now particularly with the addition of Squirrel Girl, they are Marvel Television favorites as well,” Loeb said. “After the amazing experience we’ve had with Freeform on Marvel’s Cloak & Dagger we can’t think of a better place for our young heroes.”

New Warriors comes as Marvel continues to expand its TV footprint. In addition to ABC’s Agents of SHIELD — its first live-action scripted series — the comic book company also has The Inhumans (a straight-to-series drama set to debut in Imax theaters in a groundbreaking deal) set to debut in the fall on ABC. Beyond that, Marvel has a slate of shows at Netflix including Daredevil, Jessica Jones, Luke Cage, Iron Fist, mini-mashup The Defenders as well as The Punisher. The company just scored a second season for FX’s X-Men take Legion and has a Matt Nix pilot in the works at Fox, with Amy Acker attached, as well as a take on its beloved Runaways, starring Gregg Sulkin.

Biegel, meanwhile, has been a longtime Marvel and Squirrel Girl fan. His credits include The Real O’Nealsand Enlisted. He’s repped by UTA.

For Freeform, New Warriors joins a slate that includes Baby Daddy, The Fosters, Shadowhunters, Stitchers, Switched at Birth, Young and Hungry, Beyond, Famous in Love, Alone Together and The Bold Type.

Below, Burke talks with The Hollywood Reporter about what to expect from New Warriors as well as how it fits in at Freeform.

How competitive was this?

It was super competitive as everything is right now. We were already in business with Marvel on Cloak and Dagger, which was our first foray with them. We had chased Squirrel Girl before Cloak and Dagger and Marvel had said they would let us know when they were ready to do something with it. Our head of development wore her Squirrel Girl hat in the pitch, which may have put us over the top. We’ve been longtime fans.

What makes this the right show for Freeform?

The more we got to know Marvel and the more comfortable they got with us as the home for their young adult IP, these conversations became easier. They started to see our strength with young adults and together we could create a pipeline for content that was specific to our audience that felt younger than what they’re doing at the other channels. I wanted to be in business with Marvel when I first got here but I didn’t want to chase them just to chase them. It was important to both of us to find the right characters that felt like they would speak directly to Freeform’s audience. The Avengers wouldn’t work here but the about-to-be-Avengers works here.

How will New Warriors fit in with the Freeform brand? What does this mean for older, aging multicam shows like Baby Daddy and Young and Hungry? Are you making a single-cam push?

I love Baby Daddy and Young and Hungry and believe in multicam comedy. I believe these single-cam broader and ballsier concepts in comedy can live alongside those. It may be that we do another night or that we have a night of branded comedy that starts multicam and goes to single-cam. But I believe we can have both. This represents an evolution. It’s not that we’re shifting away from something, but toward something that is important. It’s louder. Cable comedies, the hallmark ones, have been single-camera. They’ve been more conceptually distinctive. Knowing that was one of our strategies, this was an easy reach for us. We have another single-cam that we’re starting production on, Alone Together, from Andy Samberg and his company. These shows feel like they belong together. We are a network for young adults but we’re proud we’re No. 1 with young women and we want to find characters who speak to them. There’s a reason we chased Squirrel Girl: she embodies all of that.

Is the plan for Cloak and Dagger still winter 2018? Will these shows launch at the same time? Could they air on the same night? Maybe Alone Together and New Warriors leading Cloak and Dagger?

Yes, still winter 2018 for Cloak and Dagger. But that’s not a bad idea. We’re modeling schedules now as we head into the upfront [on April 19]. That is one alternative. Or we may stick with a comedy night and a drama night as originals that we’re doing now. Or we could not pair them together and have a Marvel comedy on the comedy night and Cloak and Dagger as part of the drama night.

Marvel likes to say that “everything is connected.” Will Cloak and Warriors be connected the way, say,Agents of SHIELD and Agent Carter were?

It’s a great question. If you know these two properties, they’re not particularly connected. There are many degrees of separation with where they fall in the Marvel universe. But anything is possible with Marvel. Their tones are so wildly different. Cloak is this angst-filled achingly beautiful heartfelt romantic drama. And Squirrel Girl is a balls-out comedy.

What was Kevin Biegel’s take on the property?

We were big fans of Enlisted and were excited when Marvel put him together. Marvel and ABC Studios had made that marriage before it came to Freeform. He has a great love for all the characters that are populating the show around Squirrel Girl. He has a deep respect for Squirrel Girl. Her greatest weapon is her optimism — and this is a character who could easily be made fun of — but she’s written so lovingly that we were thrilled when he was packaged with it. When he came in and pitched it, he understood her importance in the world and as hopefully an iconic heroine for audiences.

A few actresses have been vocal about wanting the role of Squirrel Girl — Anna Kendrick and Stranger Things breakout Shannon Purser. Are you looking for an established actress?

Those names have come up! This network has made a lot of stars and we’re in a unique position with Squirrel Girl and Marvel. The character is such a calling card. I’m interested to see if name actresses feel right for it.

What can you say about the other characters who comprise the New Warriors?

You’ll have to wait and see. We know who they are but I’m not at liberty to say.

Netflix created its own Marvel universe with Daredevil, Jessica Jones, Iron Fist and Luke Cage, and then the super mashup with The Defenders. In success, is there a way New Warriors would lead to spinoffs in sort of the reverse of what Netflix has done?

Absolutely. The characters they’ve chosen are all really singular and could each carry the show that they’re on. They’re bound together as a band of underdogs for as long as we choose with this show but it’s conceptually tailor-made for spinoffs. 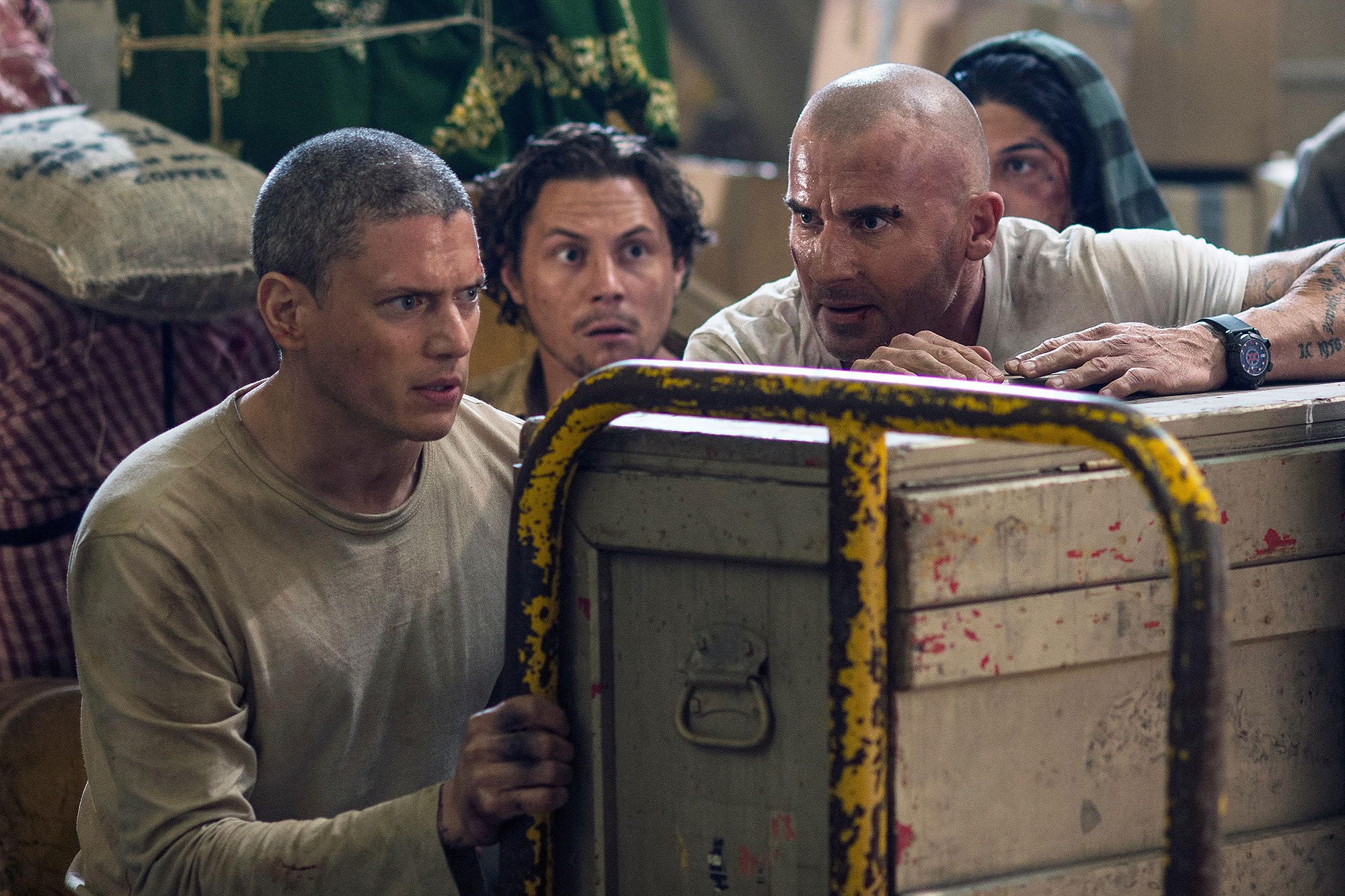 August 2005 was a much simpler time: The first iPhone was still two years away from being released, Deuce Bigalow: European Gigolo was in theaters, and Prison Break debuted on Fox. After two prison escapes, an Ocean’s Eleven-style reset, four seasons, and a TV movie, the hit series signed off in 2009. Now, with Fox reviving many of its greatest hits (please let Fastlane be next), Michael, Lincoln, Sara, T-Bag, […]