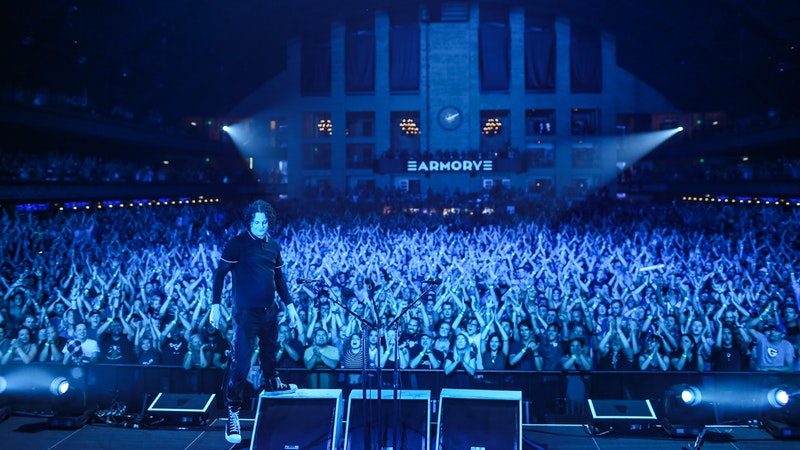 We’ve had chances to see White’s side projects the Raconteurs and the Dead Weather, a series of momentous shows here with the White Stripes, and even a brief but memorable acoustic set for Prairie Home Companion. But since officially kicking off his solo career in 2012, White has routinely skipped the Twin Cities. As a result, myth, memory, and hyperbole started to divide some of his deprived local fans.

Was White a visionary or merely an eccentric steeped in nostalgia? Was he an innovator pushing music forward or a thief appropriating artists from the past for his own personal gain? Was he a misunderstood revivalist saving what’s good and pure about music or a domineering misanthrope squeezing all the fun out of the entertainment experience? Was his current album, Boarding House Reach, just odd enough to be interesting, or was it too weird to resonate with fans who have forgotten his brilliance? Ultimately, do any of these trivialities matter once you hear the rousing opening chords of “Seven Nation Army”?

Jack White has forged a career out of making the old sound new again, all while cultivating an affection for a bygone era when music, love, and life itself were, if not less complicated, at least a lot less digital. And on a night where White required all 8,400 of us in the sold-out Armory to put our phones away (in sealed plastic bags) and be present in the moment with him, he and his four-piece backing band ripped through nearly two hours of songs that highlighted why he’s been such a vital creative force in music over the past two decades.

After a countdown clock teased the audience about when the start of the show would arrive, White’s band (drummer Carla Azar, bassist Dominic Davis, synths/keyboardist Neal Evans, and keyboardist Quincy McCrary) opened with a filthy blues instrumental that White (dressed all in black) dove headfirst into when he appeared, ripping a crunchy guitar solo before they even kicked into the show’s spirited first number, “Over and Over.” From there on out, it was a flurry of jams drawn liberally from throughout White’s distinguished career, save for 2014’s Lazaretto, which was surprisingly ignored.

White mixed in a generous amount of White Stripes songs early in the set (“Dead Leaves and the Dirty Ground,” “Cannon,” “The Hardest Button to Button,” and a countrified “Hotel Yorba”), clearly relishing the opportunity to revisit and rework these celebrated songs. And while the Stripes songs lost just a touch of the raw urgency of the early days, they really came to life with a full band fleshing out the scope of their sound, anchoring the heart of the tracks while White’s scorching riffs drove them home.

A cover of Beck’s “Devil’s Haircut” was another early surprise, with the group adding a smooth, soulful touch while also mixing in “Cannon” to give the version some bite. White still operates without a setlist, barking out the names of the next tunes to his band or depending on them to keep up with his changes. That gives every Jack White performance an added spontaneity and unpredictability, where you might just see and hear something that even White himself didn’t imagine.

One of those moments was during a lively take on “My Doorbell,” which featured White playing drums. He left the stage for a moment, and returned beaming with two young children at his side. “I can’t believe I’m doing this, Minneapolis. But I figured since there weren’t any cameras in the room it was OK,” the notoriously private White announced sheepishly. “This is my son Henry Lee, and my daughter Scarlett. It’s Henry Lee’s birthday tomorrow, would you join me in singing ‘Happy Birthday’ to him?” The crowd obliged in full voice, happy to take part in a special, private moment between Jack and his kids that would have never taken place if everyone had their cell phones out.

White’s solo material (“Corporation,” “Freedom at 21,” “Blunderbuss,” and “Respect Commander”) all had an expansive, experimental edge, especially the Boarding House Reach numbers. It was as if White felt that he offered up enough recognizable hits to allow him and the band to get a little weird for a while (cue the Dead Weather’s “I Cut Like a Buffalo” and a wild take on “Ice Station Zebra” during an encore otherwise filled with towering anthems).

The blue-hued digital screens behind the band added an arty touch to the show, with classic Roman statues morphing into a Trevi Fountain-like image during “Hypocritical Kiss.” And a lone, defiant girl with antlers looked like a cross between Degas’ dancer and Lewis’ magical world of Narnia during a lovely run through of “Humoresque.”

Beginning with a filthy, keys-laden take on “Ball and Biscuit” that closed out the main set, the show ended with one massive jam after another. “Icky Thump” took on an added vehemence following Jack’s “Icky Trump” marketing campaign, while “Steady As She Goes” was another one of the night’s massive crowd singalongs. An impassioned and potent version of “Connected by Love” allowed us to catch our breath for a moment, before “Seven Nation Army” brought the house down.

“Thank you Minneapolis. God bless you. Thank you for singing ‘Happy Birthday’ to my son, Henry Lee. You’ve been incredible, and I’ve been Jack White.” It had been far too long since White rocked a room in the Twin Cities, but this show reminded us all that musical magic does take place when he takes the stage. He generously shared his family and a bit of his soul with us last night, and we were all right there with him in the moment, believing that music and love can and will unite us all once again.

A note on the opener: Tyler Childers delivered a lively 40-minute opening set filled with warm country jams that had some bite to them. He and his four-piece backing band turned the vast Armory into a neighborly front porch in summer, playing tunes from 2017’s Purgatory that resonated well and set the stage perfectly for the headliner. “That was a fun song about whacking off,” Childers joked after a warm ovation. “I’m just out here writing about the human experience.” And it seemed we could all relate to his twangy, genuine songs that gave the night a warm, down home vibe straight away.

A note on the venue: This was my first show at the Armory and I came away thoroughly impressed. Other than some slight confusion about where the box office was and what line I needed to be in, entry went smoothly despite everyone having to seal their phones in pouches provided upon entrance. The long, cavernous room still maintains a welcome intimacy that is typically lacking in venues of that size, while the sound and sightlines were pristine. (Though the stage could be raised up just a bit to help shorter fans see better.) The layout is easy to navigate, with long bars and multiple bathrooms providing whatever type of relief a concertgoer could be looking for. We’ve needed a high-quality room of this size in the Twin Cities for years now, and the Armory is set to take its place alongside the other celebrated music venues in Minneapolis.

About that cell phone policy: Sure, it was a bit of a hassle getting in while everyone had their phones sealed in pouches, especially for those who only had digital tickets on their phone. But once that was sorted, it was so refreshing to watch a show where your view wasn’t obstructed by a sea of cell phones held aloft. (And getting the pouches unlocked after the show was smooth and painless.) More than that, it was rewarding personally to not have the temptation to live tweet the show, or capture Instagram-worthy photos or videos. The performance happening in front of us was the focus of everyone’s attention, and the show was that much more personal and powerful as a result.

Over and Over
Dead Leaves and the Dirty Ground
Corporation
Freedom at 21
Devil’s Haircut/Cannon
Why Walk a Dog?
The Hardest Button to Button
Hotel Yorba
Blunderbuss
Little Bird
My Doorbell (‘Happy Birthday’ to Henry Lee)
Hypocritical Kiss
Respect Commander
I Cut Like a Buffalo
Humoresque
Ball and Biscuit 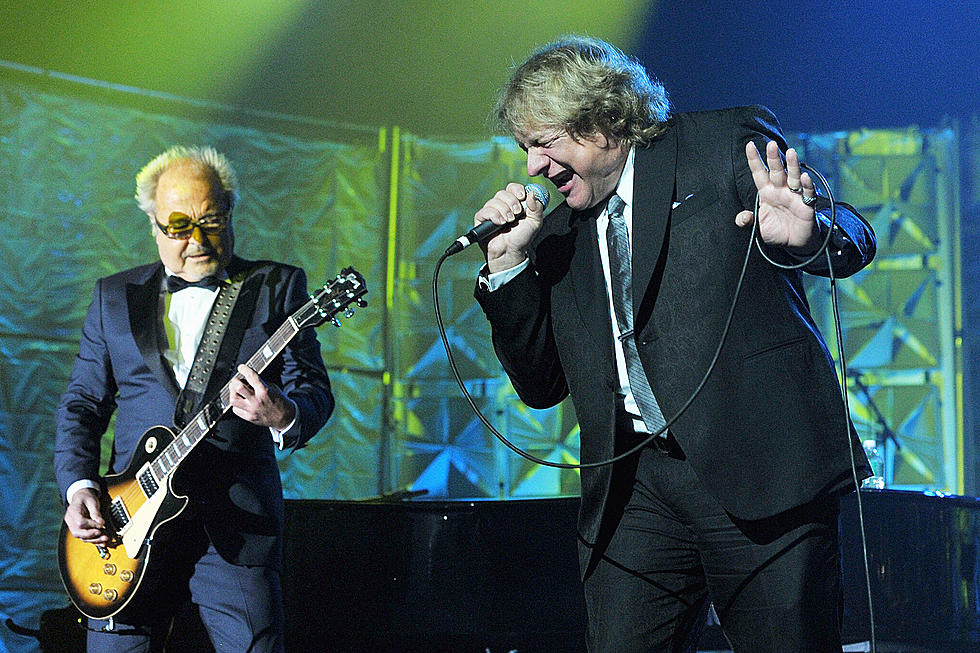 Foreigner announced four concerts billed as “special celebrations," featuring all of the surviving members of the band, past and present, which will take place on Nov. 9, Nov. 10, Nov. 30 and Dec. 1 this year. You can see full details below. The brief run follows last night’s similar appearance – arranged after leader Mick Jones and former frontman Lou Gramm settled their differences several years ago – and several […]