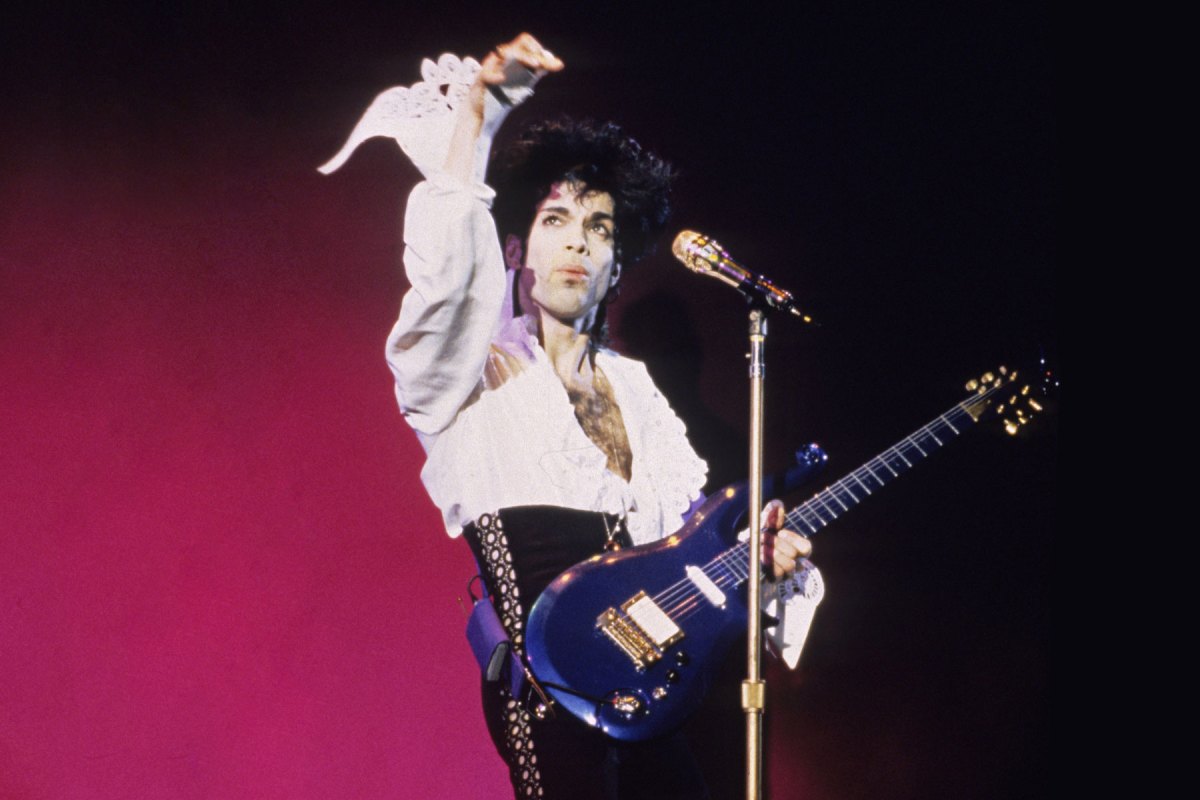 Truly historical objects are often palimpsests: repainted, refinished, refurbished — if you were to peel back the layers like the rings of a tree, that object’s history would be revealed.

The same goes for Prince’s second 1984 Cloud guitar: beginning its life as an entirely different instrument — the castoff from a defunct company — it has been nearly every color on the spectrum. White, peach, light blue, yellow and, finally, electric blue. The instrument — nicknamed the Blue Angel — is now set to hit the auction block next month as part of Julien’s Auctions Music Icons event. And it’s far rarer than the auction house had initially bargained for.

“In a sea of Clouds — because there are a lot of them — the thing that brings a collectible guitar the most value is how much mojo it has,” Laura Woolley, consulting specialist for Julien’s, tells Rolling Stone. “Prince came into the collective consciousness in the Eighties and this was one of his primary performance guitars at that time. So it’s got a lot of mojo.”

“It’s the most significant Prince guitar that’ll ever come up for auction,” auction house founder and president Darren Julien adds.

When Julien first announced that the guitar — the same kind of the ornate, curlicue instrument Prince plays in Purple Rain — was up for auction, the auction house didn’t know what they had; it was simply listed as “a custom-made 1984 blue Cloud guitar used by Prince.” Since 1993, luthier Andy Beech has been producing the iconic model, but, before that, four original guitars were created that are markedly unique. When news broke that Julien’s was auctioning off a pre-1993 model, author and Cloud guitar expert John Woodland called the auction house immediately, suspecting that the 1984 instrument was the elusive Blue Angel — a.k.a. one of those initial four.

Woodland had previously done conservation work on Prince’s guitars at Paisley Park and is currently working on a book about the Cloud model with Gerald Ronning — who worked at the shop where the Purple One’s instruments were created in the Eighties — titled Look Up in the Air: The Origin of Prince’s Cloud Guitar. Woodland told Julien that he had been on the lookout for the instrument for years. “I’d heard rumors that it was in Holland,” he tells Rolling Stone.

Julien declined to say where the guitar has been for the last few decades but notes that it’s been in a private collection since the Nineties and that the owner wasn’t aware of its exact history. He adds that it was gifted by Prince to the current owner.

The Blue Angel was considered key to Prince lore given how frequently the Purple One used it. He played it during his 1984/1985 Purple Rain tour and on The Arsenio Hall Show, MTV, Saturday Night Live and in music videos. The instrument also made appearances on 1986’s Parade Tour, 1987’s Sign o’ the Times Tour, the 1988-1989 Lovesexy Tour and a 1991 cover of Spin magazine. The guitar was originally expected to go for $100,000, but given its origins, Julien’s now suspects it will go for upwards of $500,000.

The mythology of the Cloud guitar design stretches back to 1976 when a young Prince visited New York City to shop his demo, according to materials provided to Rolling Stone by Woodland. Legend has it that he saw a bass guitar in the window of Umanov Guitars designed by luthier Jeff Levin of Sardonyx Guitars. Levin called the design the F-bass, since it was based on F-style mandolins. When Prince was working on 1984’s Purple Rain, he wanted to recreate that moment in New York; his character, the Kid, also sees a guitar in a shop window. To create that object of desire, Prince reached out to Minneapolis guitar shop Knut Koupeé Music, to which he brought the bass and asked for a similar guitar — this time white with EMG pickups and gold hardware.

Guitar shop owners Karl Dedolph and Jeff Hill had a backlog of guitars and instruments — from Jerry O’Hagan whose own guitar business folded in 1985 — and Frankensteined an O’Hagan Shark model into the first Cloud guitar. When Prince came back for more instruments, Knut used an O’Hagan Nightwatch model as the base for the Cloud 2. In all, Woodland names the creators of the guitar as: O’Hagan Guitar Company, luthiers Tommy Stinson (no relationship to the Replacements member), Dave Rusan and Barry Haugen — plus painter Mark Sampson. All four original Cloud models were first O’Hagan guitars.

Once connected, Woodland and Julien went through their due diligence to confirm the guitar’s authenticity. After examining the hardware over FaceTime, Woodland says he was 95% sure that it was the Blue Angel. To knock that figure up to 100, he asked Julien to do a CT scan on the instrument. Julien complied, bringing it to Westside Medical Imaging in Beverly Hills. The CT scan revealed exactly what Woodland had suspected: the mysterious Cloud was, in fact, the missing Blue Angel. Cloud One is displayed at the Smithsonian, Cloud 3 was sold by another auction house, and Cloud 4’s whereabouts are unknown.

“I have a policy in this world. I’m always considering pieces guilty until proven innocent,” Woolley, the Julien’s consultant, says. “So I came into this absolutely expecting to find out that [this wasn’t the Blue Angel]. But this is the most in-depth we’ve ever gone into a piece of memorabilia. The results speak for themselves.”

"We are still in the nuts-and-bolts planning phase," explains Comic-Con International's David Glanzer. San Diego Comic-Con 2020 might not be happening, but that doesn’t mean that there won't be a Comic-Con this year — it's just that it'll happen online, with organizers Comic-Con International teasing something called, simply, [email protected] 2020. The virtual event was announced via YouTube video last week, with a teaser that promised "free parking, comfy chairs, personalized snacks, […]