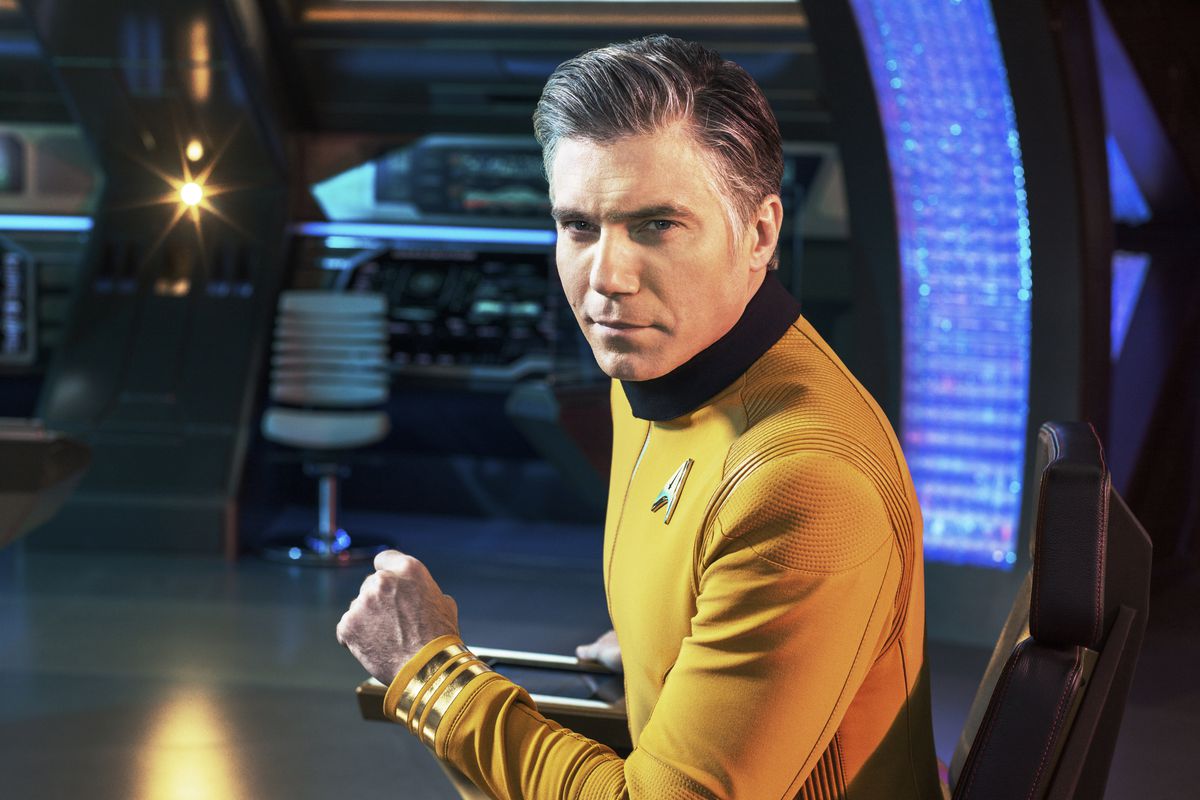 Warning: spoilers ahead for season 1 of Star Trek: Discovery, and for the season 2 premiere episode, “Brother.”

When Star Trek: Discovery returned for its second season last week, it came with an insurance plan and a risk.

First, the premiere episode, “Brother,” welcomed Christopher Pike (Anson Mount), the captain who helmed the original series’ USS Enterprise in its rejected initial 1965 pilot, beforeTrek creator Gene Roddenberry was asked to create a new pilot with the now-iconic James T. Kirk in the chair. Whatever grumblings Trekkies may have had about the bald fan-service decision to bring Pike and his first officer, the also-iconic Vulcan Spock, into the picture at the end of season 1, it was an inevitability. As the first new Trek series in over a decade, Discovery grounded itself in prequel territory from the get-go by revealing that its star, Michael Burnham (Sonequa Martin-Green), was Spock’s adopted human sister. The move was meant, for better or worse, to put doubtful fans a bit more at ease by situating the series adjacent to a familiar canon.

But like the series’ controversial first season, the new episode also featured a pretty direct left turn. Bucking the time-honored Trek trope of selecting a “redshirt” (a low-ranking, generic officer) to be the sole casualty of the first Starfleet away mission of the season, Discoveryinstead chose to off a smug, insecure white male science officer — mid-mansplain.

The move was heavy-handed. It’s made clear from the moment he appears on the transformer pad that this Lieutenant Connolly, barging into the story where fans expected Spock, is kind of a douchebag — more Winklevoss than Vulcan. At every opportunity, he negs Burnham’s suggestions and hypotheses about the mysterious red signals that have appeared across the galaxy. Then, when the team deploys in a set of explorer pods to navigate an unpredictable asteroid cluster, he presumes he knows the vehicles better than her, even though she was the original test pilot for the pods. When she warns him about the way he’s navigating, he starts loudly telling her why she’s wrong — and in the middle of his explanation, a rogue asteroid runs sidelong into his pod, killing him instantly.

Given that we barely heard a word from the mission’s female redshirt — a dead giveaway, in previous Treks, that a character is disposable and likely to be a goner — killing off Connolly is a starkly political choice. Discovery’s creators have been making decisions like this from the show’s conceptualization. First, they steered away from the classic male-commander protagonist, by centering their show around a black female first officer who was court-martialed and stripped of her rank for treason. Second, they introduced the first gay couple in Trek history (Anthony Rapp as Lt. Paul Stamets and Wilson Cruz as Dr. Hugh Culber). Third, they framed the series’ only prominent straight white male (Jason Isaacs as Captain Gabriel Lorca) as a secret fascist, human supremacist villain. 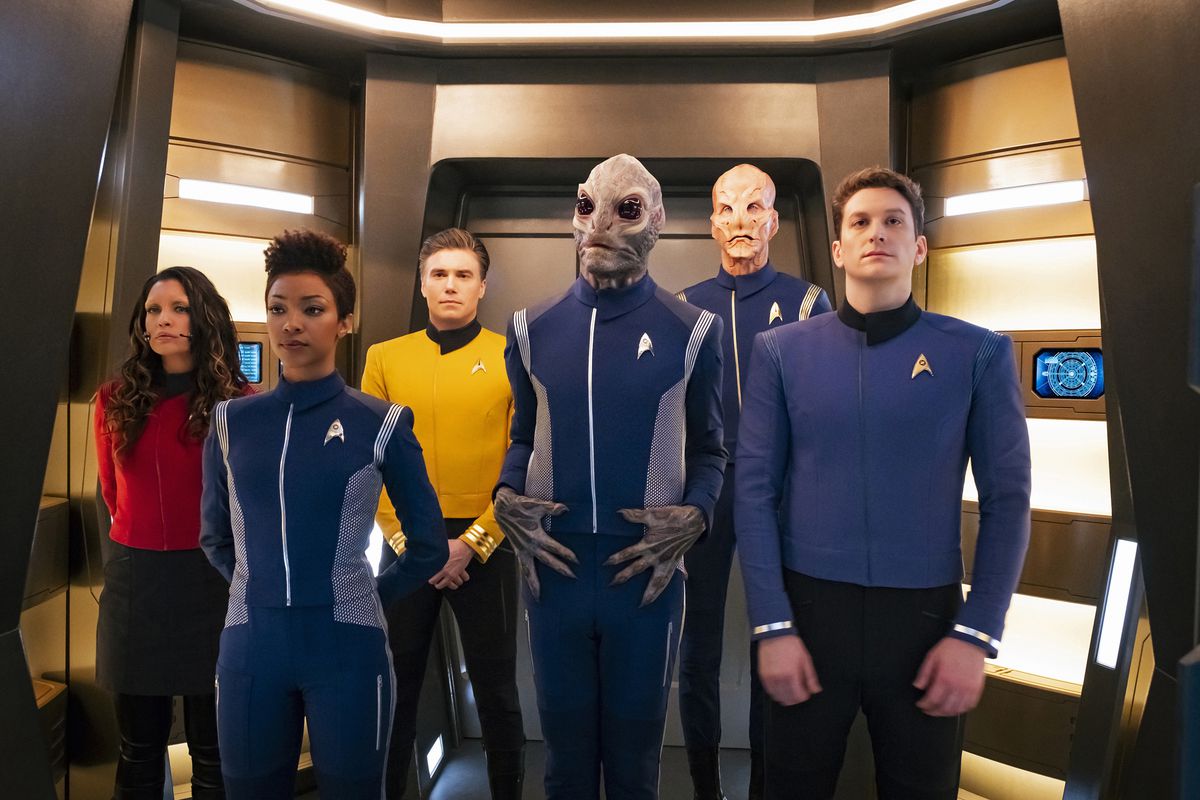 And on top of everything else, the show frequently tosses in tiny, pointed nods to progressive politics. A subplot involving a resource-consuming technology prompts Burnham to deliver a mini lecture about conservation. An encounter with a xenophobic culture inspires some head shaking about the shortsightedness and weakness of homogeneity, and people who fear anyone who doesn’t look like them. From its opening episodes, Star Trek: Discovery has been actively thumbing its nose at every social-media-bombing, Jordan Peterson-following crybaby whining about “PC culture” and “the war on masculinity,” along with every talk show host bemoaning the aggressive push for diversity in pop culture.

But for any Trekkie worth their salt, this stance ought to come as no surprise, since openly progressive politics is a natural extension of what Star Trek has literally existed to do from its 1960s inception. This cultural and political stance has been baked into the show since its opening lines: “boldly going where no [one] has gone before” is in the franchise’s DNA. The whole point of Star Trek is — to quote Pike in the Discovery premiere — to “make a little noise, ruffle a few feathers,” to afflict the comfortable and comfort the afflicted, by portraying a future in which so much of the oppression and injustice regularly committed in the current era was solved long ago. Whining about Discovery’s obvious stunting, or suggesting that it’s too performatively “woke,” is forgetting the show’s history and its longtime intentions.

Part of the inevitable backlash from this dark corner of Trek fandom, of course, is generational. Many of today’s Trekkies watched the original series (TOS) long after its initial run, and watched the series of the 1980s and 1990s — The Next Generation, Voyager, and Deep Space Nine — when they were decades younger, and thus likely more open-mindedthan they might be today. Those experiences likely cemented these fans’ ideas of what progressivism on television should look like: at the time, it still centered on straight, white, cisgendered men. 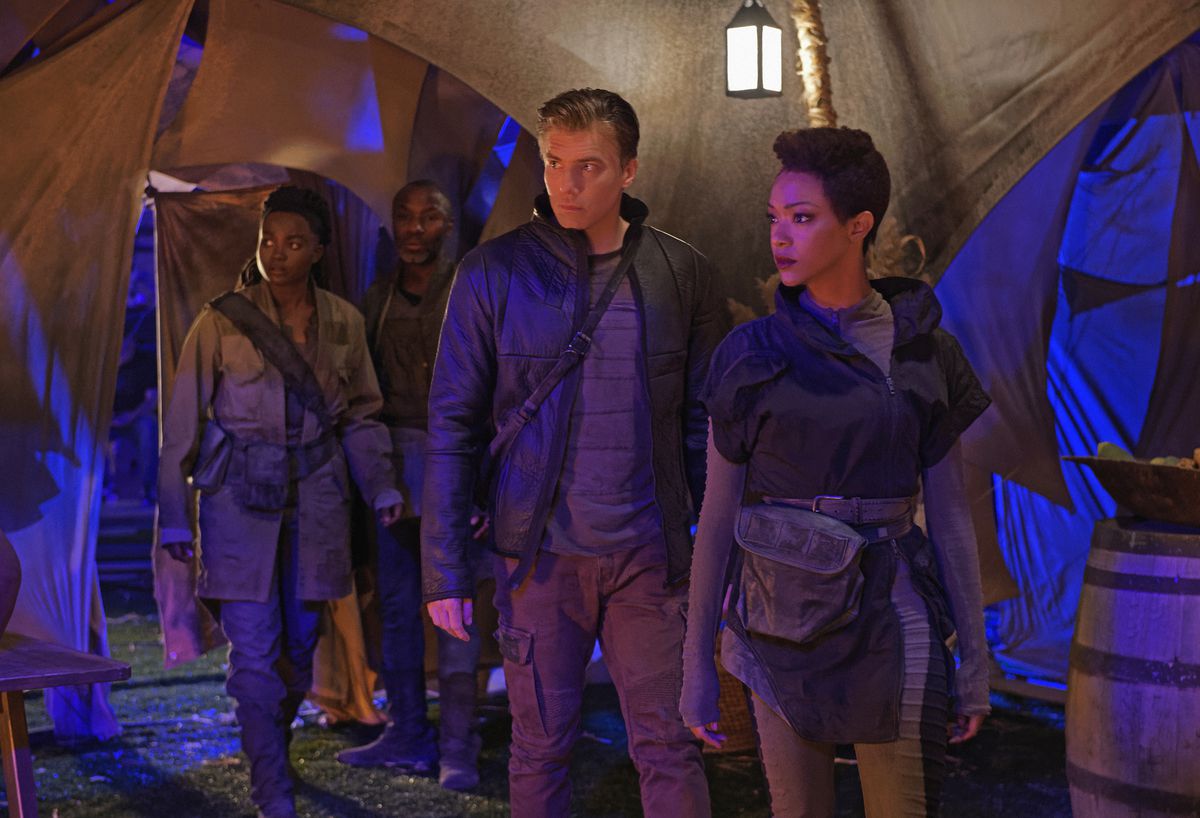 While Voyager featured a white woman as captain (Kate Mulgrew as Kathryn Janeway), and DS9 a black man (Avery Brooks as Benjamin Sisko), TOS and TNG (and the much later Enterprise) all featured heterosexual white men in the starring slots. Star Trek progressivismwas instead often expressed in ways that were at the vanguard of popular sentiment, but not so far beyond it as to completely alienate conservative viewers — Ronald Reagan, for example, was reportedly a Next Generation fan. (Although let’s be real, he probably never saw “The Outcast.”) While Gene Roddenberry was alive, he famously had to fight Paramount and the networks for his more radical ideas, and he frequently lost those battles — for instance, when he tried to give the Enterprise a female first officer in 1966, or portray openly gay relationships in the 1980s. There were always limits to what Trek was allowed to do. The progressive, futurist elements that did get through defined these series for many of the fans who loved the shows — but for straight cis white men, a fundamental part of the story was their assured place at the forefront of the progress the shows were making.

In this era, putting a black woman in that slot — and staffing Discovery’s bridge crew with mostly female officers — needed to be a given from day one. Fans of color, particularly women, have been increasingly vocal about their limited representation on-screen over the past decade, and not acknowledging that lack in a new Star Trek show would have been the series’ first obvious mistake, at least if the showrunners wanted to continue the franchise’s traditional push toward a more inclusive, equitable future. 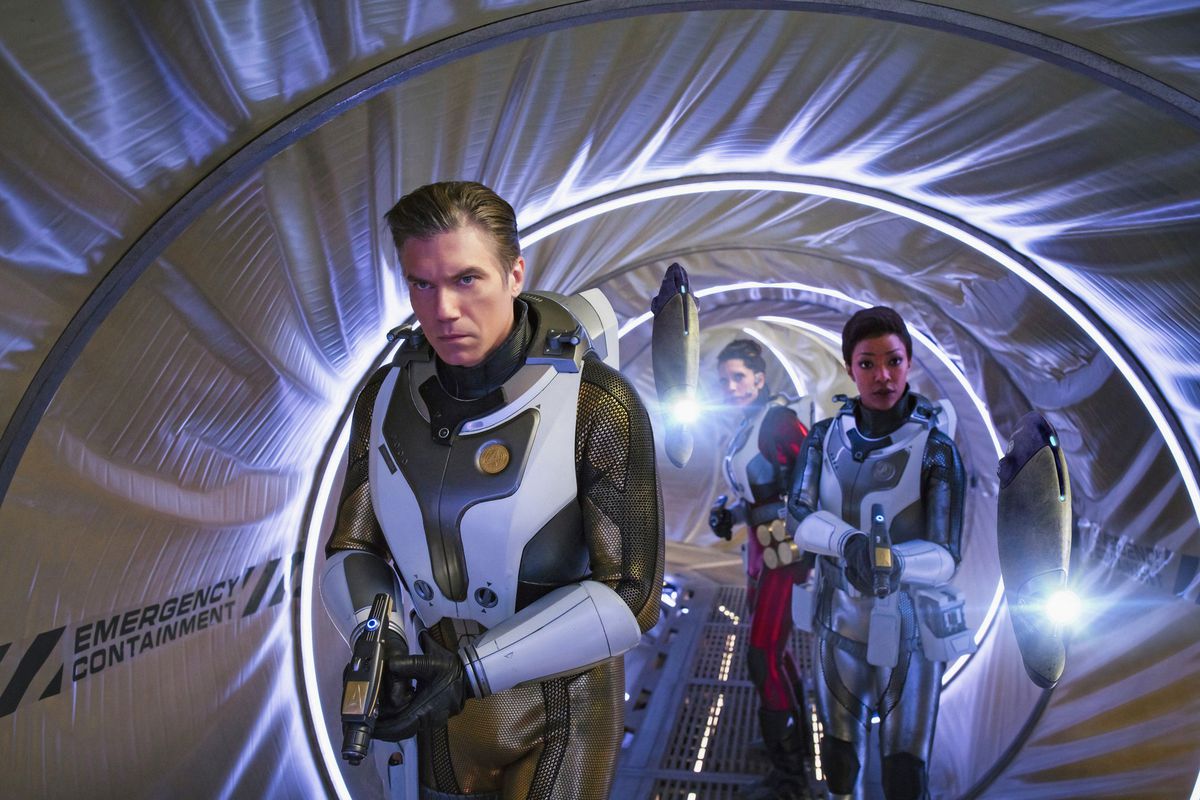 But the second-season premiere’s blunt deconstruction of toxic white male masculinity is a much bigger step, and it could be a defining point for the show. Where Treks past have modeled forceful but progressive expressions of masculinity in characters like Captain Picard or Captain Sisko, none have really interrogated the cost of condescension and entitlement like Discovery does with Connolly’s abruptly karmic demise. Explorations of topics like this have always been relegated to gentler metaphor, through alien cultures like the Klingons’ obsession with honor, or the Cardassians’ imperialist fascism. But in 2019, when centuries of whiteness and maleness are being disrupted more publicly than ever before, Discoveryaddressing it head-on puts the franchise, as a whole, right where it needs to be.

And it bears repeating, for the thousandth time: where Star Trek tends to go, so too does society. We all have hand-held communication devices and touchscreens now, but society has progressed so far toward the ideals of the original 1966 Trek that what used to feel progressive and even overreaching now feels quaint and of its era. Mae Jemison, the first black American woman in space, was specifically inspired to become an astronaut by Nichelle Nichols’ presence on the first Enterprise’s bridge, but her first flight was more than a quarter-century ago. There’s still plenty of progress left to be made in practically every arena of representation and equality. But what American society has accomplished so far looks a lot like the Treks’ integrated, diversity-welcoming futures.

Star Trek has never been written for conservative snowflakes. It succeeds because it’s made for those who need its vision to keep boldly going forward, to be heartened and find the strength to continue pushing for the kind of better future Trek imagines. As Eugene Roddenberry, Roddenberry’s son and an executive producer on Discovery, put it to me in 2013: “[Star Trek’s inclusivity] is the only thing that [has] kept it alive. The whole geek / nerd / dork fan movement was a bunch of people who look at life differently. They’re the ones who are leading the charge today, not just with Star Trek, but also, frankly, the world.” 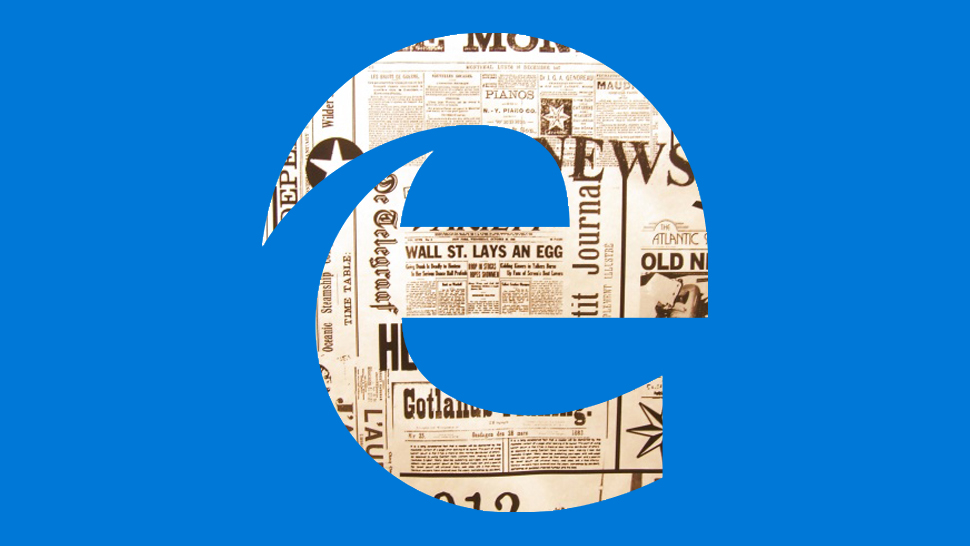 NewsGuard is a startup organization that aims to evaluate the reliability of news organizations and give web users a quick rating for how much they should trust what they’re reading. As of this week, the company’s plug-in now comes packaged in Microsoft’s mobile Edge browser. It’s a development that everyone should give their close attention. The update to Edge came with little promotion from Microsoft. The addition of NewsGuard to […]