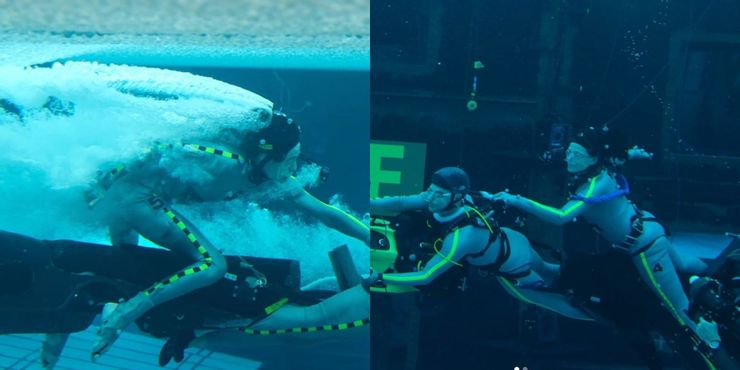 Avatar 2‘s record-breaking underwater sequences, which have played such a big part of the marketing so far, could be the key to rival the original movie’s 3D magic. That can be James Cameron’s secret but well-trusted weapon in making sure that the hotly anticipated sci-fi sequel live up to the almost impossible levels of hype established by the former highest-grossing movie of all time.

Cameron’s franchise dream for Avatar started way back in 2006 when he announced his hope of making two sequels if the first movie was successful. It took ten more years for the pioneering director to reset his plans and announce four sequels that somewhat unexpectedly became Disney’s second tentpole sci-fi movie franchise when they bought Fox’s movie arm. And when Cameron did announce those plans, there were more sequels and more of a roadmap for Avatar to become a huge sci-fi series for Disney to rival even Star Wars. But those sequels have an uphill battle, because they can’t count on the instant marketability of Avatar‘s groundbreaking, at times breath-taking 3D technology. All story elements and performances aside, that was the major draw for a significant section of Avatar‘s audience and the means by which it broke the high-concept sci-fi glass ceiling to appeal to crucial mainstream demographics. How they made multiple billions, in other words.

There is an answer to that missing magical element however, and it all comes back to James Cameron’s long-term fascination with the unconquered abyss under the sea. The director’s filmography is dotted with significant underwater projects, from early releases Piranha II and The Abyss to Titanic and even Avatar and documentaries Aliens of the Deep and Ghosts of the Abyss. And as recent set imagery showing Kate Winslet breaking Tom Cruise’s underwater filming record proved, he’s pushing that long-standing creative obsession into Avatar 2. And it might well be the magic the sequel needs to compete with its juggernaut predecessor.

Crucially, Winslet’s underwater achievement is no mere stunt to introduce a character: concept art from Avatar 2 has confirmed that new RDA vehicles will also be involved, suggesting significant underwater sequences and rumors suggest that a large portion of the movie will be submerged.

The Crabsuit: A human driven multifunction submersible. One of the many new RDA vehicles that will be seen in the Avatar sequels.

Thanks to Producer @JonLandau for sharing this concept art! pic.twitter.com/8RwZ38nizj

Even more importantly, unlike the likes of Aquaman, which invested heavily in rig technology to make it appear that the actors were performing underwater, in order to get around the challenges presented by actually doing so, Avatar 2 is the real deal. Producer Jon Landau has previously shared set photos showing performance capture underwater, including by Sigourney Weaver and Kate Winslet. Winslet let slip that she is playing a “water person”, which was already established information, but the fact that other principal cast has filmed in motion capture underwater suggests something even grander in scale. That suggests that Avatar 2‘s story has a huge reason for being underwater, which gives Cameron the scope to really push his technology.

Just as he chased technological wonder in Avatar, Cameron is seeking the same magic, but without a 3D gimmick (which the medium, unfortunately, became with subsequent releases that didn’t stick to Cameron’s precise shooting conditions). Those advancements genuinely present the possibility that he will achieve something as visually dazzling and as groundbreaking as Avatar, and crucially, if he pulls it off, it will sell by way of word of mouth to huge potential audiences on the same magic-trick conceit as Avatar‘s 3D did. That film worked so well because you couldn’t see the rabbit hidden inside the top hat, and Cameron’s commitment to follow through his decades long underwater fascination with the visual technology to match could well capture that same magic that saw Avatar 2‘s predecessor become the biggest movie of all time for a long while.