“We are still in the nuts-and-bolts planning phase,” explains Comic-Con International’s David Glanzer.

San Diego Comic-Con 2020 might not be happening, but that doesn’t mean that there won’t be a Comic-Con this year — it’s just that it’ll happen online, with organizers Comic-Con International teasing something called, simply, [email protected] 2020.

The virtual event was announced via YouTube video last week, with a teaser that promised “free parking, comfy chairs, personalized snacks, no lines” — something that, under traditional Comic-Con situations would sound like a dream. But [email protected] shouldn’t be considered this year’s incarnation of the traditional southern Californian pop culture show, according to show organizers.

“I don’t think we’ve really thought of it in terms of a replacement for the show,” Comic-Con International’s David Glanzer told The Hollywood Reporter via email. “It is an iteration that we hope will convey some of the excitement of Comic-Con in whatever format we and our stakeholders can create. We are reaching out to various entities who are usually involved in the physical show to see if, and how best, we can incorporate them into an online version.”

San Diego Comic-Con was set to take place July 23-26, but was canceled last month. Even though COVID-19 has been closing down conventions since March’s Emerald City Comic-Con, Glanzer said that Comic-Con at Home wasn’t something that CCI had been developing for a while; instead, it’s been a surprise addition to the organization’s calendar.

“When we had to make the difficult decision to postpone WonderCon Anaheim [in April], we were a little taken aback. We never had to outright halt production on an event in the works. Then, after a time, we began to think about how we could still engage fans who wanted the experience of the WonderCon community. So the [email protected] initiative was born,” he explained. “We still hoped we could have the [San Diego] Comic-Con event this summer and really hadn’t spent a lot of time exploring an online component. Especially when we were already engaged in [email protected] and Comic-Con [email protected]”

[email protected] featured a mix of virtual panels and archive material from previous shows posted in the week surrounding the originally scheduled in-person event, while Comic-Con [email protected] includes video and downloadable content centered around exhibits and material found inside the Balboa Park location. It’s unclear if either of these examples will be models for [email protected], with details of the virtual event remaining under wraps — for one very good reason: CCI has yet to decide exactly what [email protected] is going to look like.

“There are several different ideas floating about [concerning the format and timing of the event], but we are still in the nuts-and-bolts planning phase, which is why our tease about [email protected] was deliberately void of any specifics,” Glanzer said. “But there are certainly a great many options from which to choose.”

Whatever the event ends up being, it’ll likely inform the future of Comic-Con as a whole, Glanzer believes. “I imagine there will be an online component to all our shows from now on,” he said. “It’s interesting that the Comic-Con Museum, which is slated to open to the public in 2021, had always envisioned a virtual component. They’ve had to move things along a little faster than originally planned, but I think there could be a permanent online element moving forward.”

More information about [email protected] 2020 is expected to be revealed in the coming weeks. 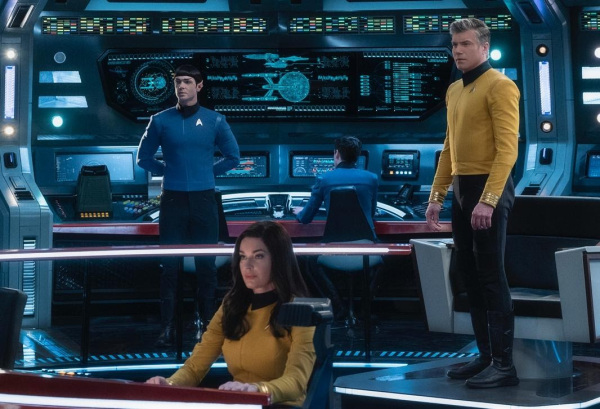 CBS All Access is bringing back some fan-favorite characters for a another brand new “Star Trek” series. The streamer has given a series order to “Star Trek: Strange New Worlds” starring Anson Mount as Captain Christopher Pike, Rebecca Romijn as Number One and Ethan Peck as Science Officer Spock. The series will follow Pike, Spock, and Number One in the decade before Captain Kirk boarded the U.S.S. Enterprise as they […]