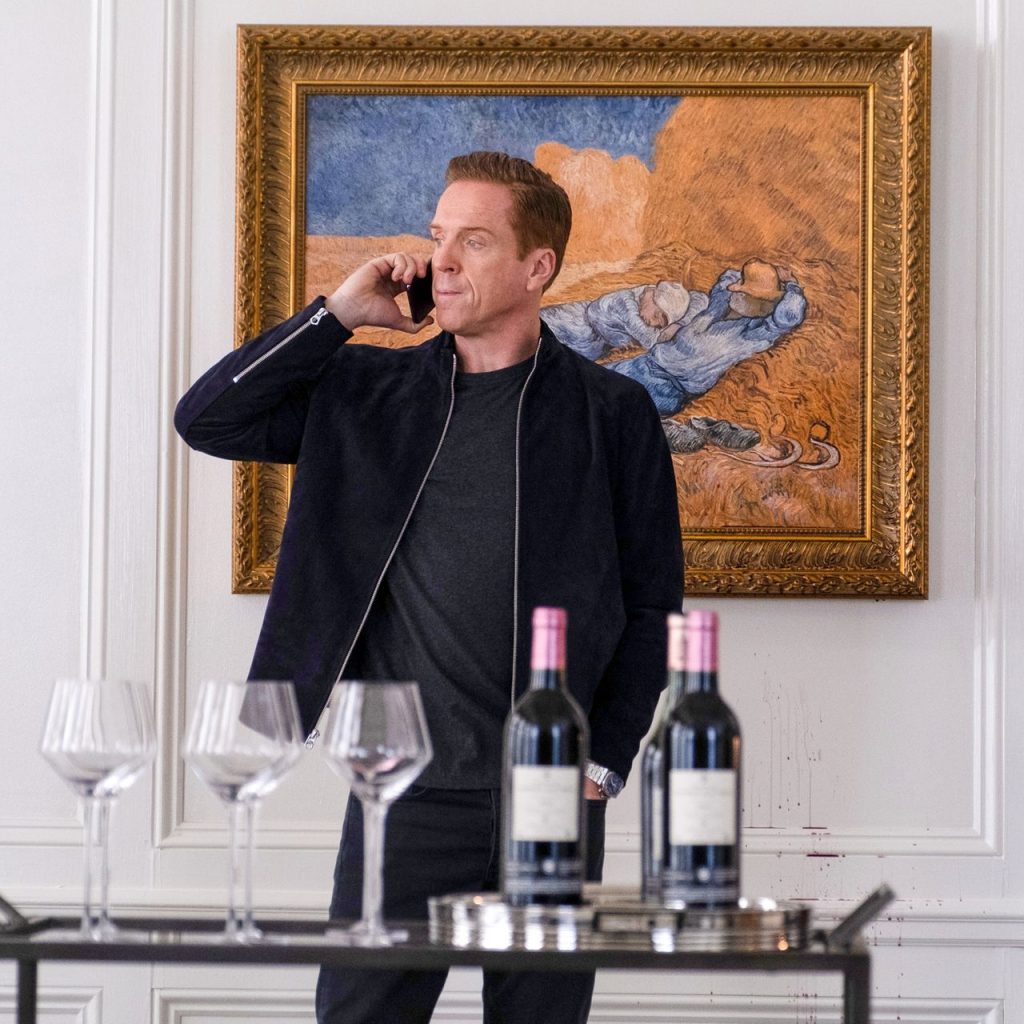 The stars created all the art used in the fifth season of the Showtime drama, which puts collecting at the center of the story.

In a recent episode of Showtime’s hedge-fund drama Billions, Bobby “Axe” Axelrod and his right-hand man Mike Wagner stand before three mammoth street art-style canvases they have come to preview ahead of an exhibition by a sought-after young artist.

“You have to stand in front of a painting, feel what it does to you,” Axe muses in a gravelly voice.

As they get closer, the pair see something horrifying. “Red dots,” Wagner stammers. “That means sold… that means…”

A look of dismay floods Axe’s face. “There was a pre-previewing!” he exclaims. “We got snaked.”

Such is the delicious art-world melodrama that runs through the first seven episodes of the show’s fifth season—so close to being right on the money (presales, presales, presales) and yet just a little bit off (red dots on the wall label in a private viewing room, and not on a checklist?).

Axe lures pure-at-heart artist Nico Tanner to the dark side with exorbitant sums of cash.

The mile-a-minute show, which follows a years-long cat-and-mouse game between Chuck Rhoades, a dogged US Attorney (Paul Giamatti) and the hotshot hedge-fund tycoon Axelrod (Damian Lewis), is no stranger to the world of art. Real artworks (or, at least, copies of them) have lined the sets since day one, filling both the sleek headquarters of Axe Capital to the billionaire’s chilly downtown loft.

But the first half of the new season puts art at the very center of the turbulent plot and brings a number of different artists to the screen. (The show paused filming midseason because of the public-health situation.) We spoke to Billions‘s production designer and art director James Gloster about enlisting some very famous figures, making his own onscreen artistic debut, and that whole freeport subplot.

In the show’s first four seasons, set designers worked at a fast clip to bring together reproductions of real works fit for a billionaire’s art-collecting mood board: examples by Jean-Michel Basquiat, Pat Steir, Frank Stella, Yves Klein, Robert Motherwell, and Huma Bhabha. “We were looking for artists with name recognition whose works would be in the Billions world,” Gloster said.

This season, however, the show is taking a different approach to evoke the character’s frayed psyche. It turned over its two recurring locations, the Axe Capital headquarters and Axe’s apartment, to artists up to the task of capturing the relentlessly capitalistic and paranoid mind of Bobby Axelrod: Bob Dylan and David Lynch.

“The showrunners… thought it would be a cool idea if Axe had a lot of work by one artist,” Gloster said. It just so happened that the two who fit the bill are also world-renowned creatives.

Those looking closely will be able to spot works by Bob Dylan in Axe’s always sort of dark downtown apartment. Courtesy of Showtime.

Gloster said Lynch was “more than gracious” about allowing the show to include recreations of the works, which the production team retrofitted with three-dimensional components including light bulbs.

“This year, the goal was really to get into Axe’s mind,” Gloster said. “His world is more and more chaotic and his outlook is not as healthy as it might be, so we were looking for art that emphasizes that.”

An Artist On the Edge of Selling Out

This season also cast its very own tortured artist: the tattooed, paint-splattered Nico Tanner (Frank Grillo). Though Tanner’s “Implosion” series was scooped up by competing billionaire Michael Prince in episode three, Axe is animated by the spirit of competition and eventually cajoles Tanner to create a new series for him on commission.

When it came to set design, Nico Tanner proved troublesome. “When you approach an artist and say we want to use your artwork, but we don’t want your name on it, we want a character’s name on it—then it gets a lot trickier,” Gloster explained. (It probably didn’t help that the whole arc was about Tanner selling out.)

Realizing the traditional approach wouldn’t work, Gloster took matters into his own hands. “I just started creating a bunch of art in Photoshop and presented it to the showrunners without telling them I’d made it. When they asked who the artist was, I jokingly said ‘Moi Gloster,’ meaning myself. And, lo and behold, they went for it.”

To create Tanner’s sought-after style, Gloster spent weekends walking around Brooklyn taking pictures of street art and graffiti—which he believed would have inspired the character—and blending those influences into something new. Then the works were fabricated on set.

“We got the files printed out in the largest sizes and then I’d again take them to the scenic shop and say, ‘Okay, I want you guys to do your magic on these!’” Gloster said. “And then our artists would go in with paint and add texture… to make it feel like a real piece of art.”

Can an accurate depiction of the art world exist without some shady money matters? This season, Axe has been making use of a freeport—those tax-free havens that house art behind locked doors—to store his trove of masterpieces.

But in a twisty-turny plot that doesn’t quite add up to real-life sense, Axe actually filled the storage crates with fakes so that he could enjoy living with the real works while also enjoying a hefty tax break. Chuck Rhoades catches wind of the plan in episode six and orchestrates a US Customs raid on the freeport.

Thanks to a tip, Axe acts fast to get the fake art out and the real art in (listen, none of this totally makes sense) and the agents (none of whom are art experts) just up and leave. To avoid any further trouble, Axe does what so many billionaires before him have—opens a private museum in a spare apartment to keep his art close while enjoying fully legal tax breaks.

Viewers get a glimpse into the star-studded collection Axe has been building throughout the seasons, including Vincent van Gogh’s The Siesta (real home: Musée D’Orsay); Georges Seurat’s Circus Sideshow (the Metropolitan Museum of Art), and Gustave Caillebotte’s Skiffs (the National Gallery of Art).

The episode also features one the best art-tele-drama exclamations to date: “Hey, we’ve got a painting problem!” 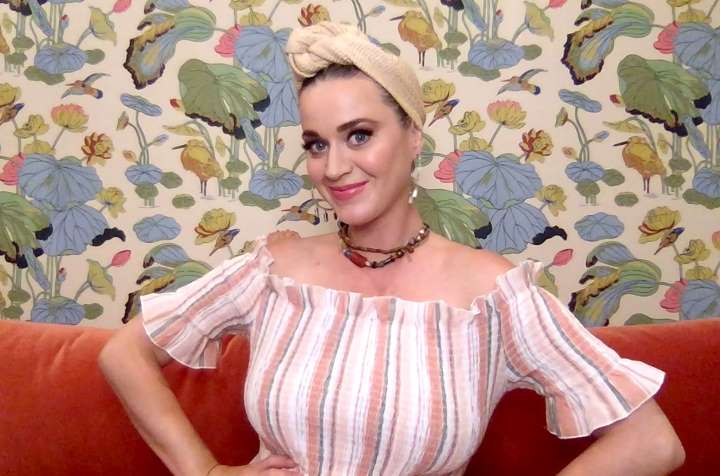 Here Are All the Livestreams & Virtual Concerts to Watch: Week of July 20

As the heatwave continues across the country this week, there are some cool shows to keep you entertained while you spread out on your couch in front of your fans and air conditioner. With the global coronavirus pandemic still ongoing -- and getting worse in the United States -- artists are continuing to livestream performances from their homes and studios to help rock fans who are staying safe at home. […]