It might seem pretty obvious to dog lovers, but researchers have found scientific evidence suggesting that dogs use facial expressions intentionally to communicate with humans.

That’s according to a new study was published Thursday in the journal Scientific Reports.

“The study adds to a growing body of evidence suggesting that for dogs, human attention is important during social interactions,” Juliane Kaminski, senior lecturer at England’s University of Portsmouth and the study’s lead author, told HuffPost in an email.

While most people already know that dogs make a variety of facial expressions, researchers wanted to know whether the expressions were involuntary displays of emotions, or whether dogs move their faces on purpose with the goal of communication.

To gain some insight, researchers with the University of Portsmouth in England enlisted 24 dogs of varying ages and breeds. The dogs were all “family dogs” with “typical” training backgrounds for pets, and went back to their homes when their part in the study was over.

The researchers aimed to figure out how the dogs’ expressions changed during different situations. In one trial, an unknown human faced the dog. In another, the human turned away from the dog. In the other two trials, the human performed the same actions, but also held a treat. The person was instructed to stay still and not respond to the dog’s actions in each trial.

The researchers found that the amount of facial movement in the canine was largely dependent on the human’s position, with the dogs being much more expressive when the person was turned toward them. In particular, dogs were more likely to show their tongues in a relaxed fashion and to make an expression many people think of as a “sad puppy face”, which dogs make by raising their inner eyebrows.

Whether or not food was present only had a very minor effect on the dogs’ expressions, even though food is known to be exciting for dogs. 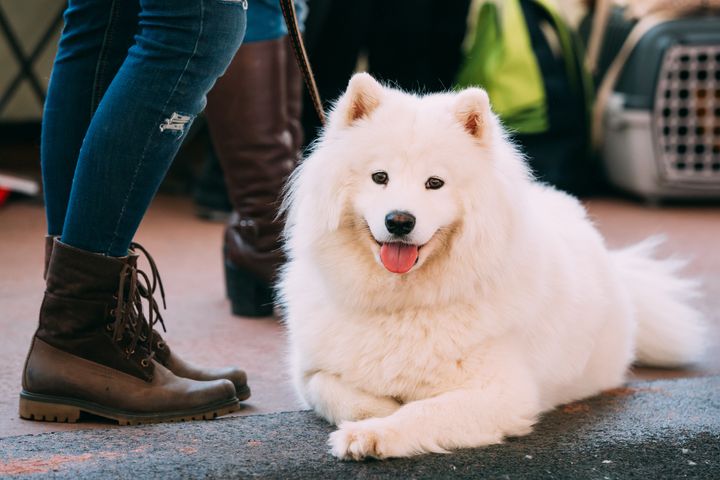 That means that increased dog facial movements seemed to be a social reaction to a person’s attention, not just a reflexive reaction to excitement.

“We hypothesise that it is a communicative signal which is under some voluntary control,” said Kaminski.

She told National Geographic that the dogs’ expressions might be “tapping into” preferences humans have, making the dogs look more infant like and “cute” to human beings. A 2013 study showed that shelter dogs who made the sad puppy expression more often found new homes faster, suggesting that making that face gives dogs an advantage with humans.

However, Kaminski told HuffPost that some news reports on the study have been a little exaggerated. In particular, she took issue with articles that said the study proved dogs were trying to “manipulate” humans with their expressions. For now, we just don’t know for sure what’s going on inside a dog’s mind.

“We can not in any way speculate what dogs might ‘mean’ with whatever facial movement they produce,” Kaminski said.

‘Thor: Ragnarok’ — What the Critics Are Saying

Chris Hemsworth's third solo movie is a light-hearted romp, but it might want to be something more. Who knew the end of everything could be so fun? The reviews of Thor: Ragnarok are in, and everyone seems to be agreed: Taika Waititi's first Marvel movie is the most enjoyable Thor movie to date — but that might not be quite the blessing it might be assumed. "The relatively laidback angle on all the murderous […]