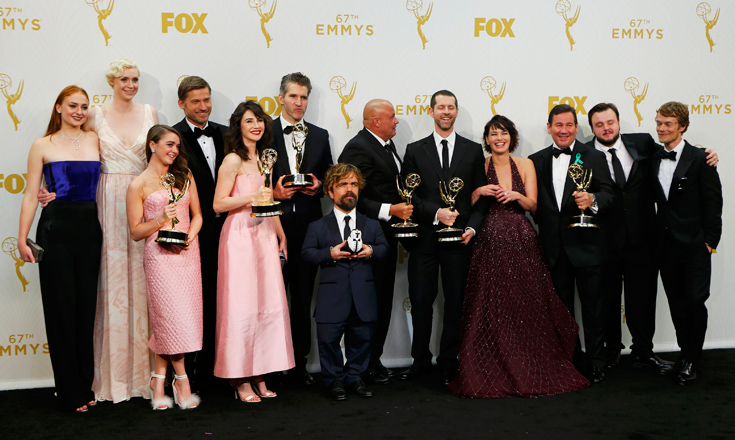 The show racked up a record-breaking 12 awards from its 24 nominations, the most any series has won in a single year. The previous record holder was The West Wing which won nine awards at the 2000 Emmys.

In addition to best drama, Game of Thrones also took home Emmys for best directing and best writing. Peter Dinklage, who has previously won an Emmy for his role as Tyrion Lannister, won for best supporting actor in a drama again tonight.

Based on the Pulitzer prizewinning short stories by Elizabeth Strout, Olive Kitteridge won almost every category for which it was nominated, winning six awards, while Veep’s victory denied Modern Family the chance of a sixth consecutive win in the category.

Veep’s creator, Armando Ianucci, was the only British nominee to win, with others including Mark Rylance, who was nominated for Wolf Hall, going home empty-handed.

Viola Davis made history as the first woman of colour to to take the prize for outstanding actress in a drama for her role in How to Get Away With Murder.

In his final season on Mad Men, John Hamm won the prize that had eluded him for eight years: outstanding lead actor in a drama for his role as the tortured, womanising ad executive Don Draper. Tripping on his way to the podium, he received a standing ovation. Alkistis Protopsalti and Eleftheria Arvanitaki, two of Greece’s most highly acclaimed performers, are visiting the United States for a most anticipated North American Tour. Part of an elite group of Greek artists who introduced contemporary Greek music to the international and world music scene, the two vocalists promise to offer an unforgettable experience. With a career that spans for over 40 years, Alkistis Protopsalti has performed for thousands of fans […]