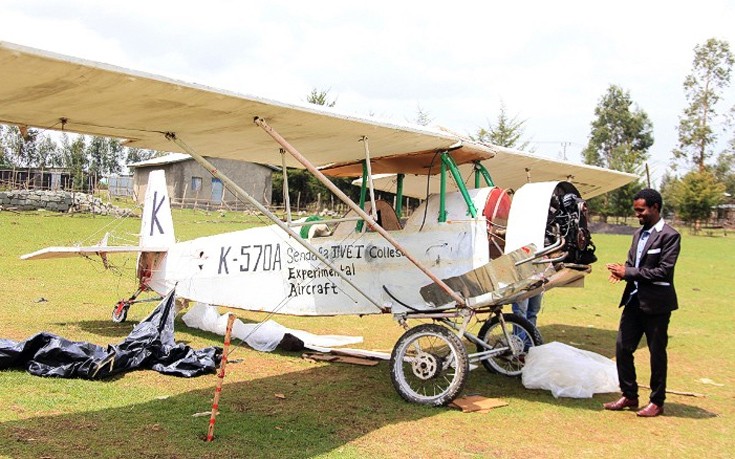 How does one arrive at a wedding? Car? Carriage? How about homemade airplane?

That’s the plan for aviation geek Asmelash Zeferu. After an aborted attempt earlier this year, he is taking to the skies in K-570, his handcrafted light aeroplane.

On November 28 the intrepid Ethiopian will fire his engine at an airstrip near Addis Ababa, and if all goes well, marry his fiance Seble Bekele the moment he lands.

What makes it truly remarkable? The fact that Zeferu has never, ever flown before.

Back with a bang

The Ethiopian’s second attempt comes five months after he first taxied to a runway 40 kilometers from the capital. That time a broken propeller — sculpted from laminated wood — scuppered his chances, but now he’s back and more confident than ever.

His engine has been upgraded to a model salvaged from a Volkswagen Transporter, doubling his power to 78 horsepower. Moreover, he’s sought professional advice to help him in the air.

Captain Solomon Gizaw of Abyssinia Flight Services and Captain Abera Lemi of the National Aviation College both confirmed to CNN that they had been helping out the budding pilot. Their mentorship sits alongside that of Rene Bubberman, chairman of the NVAV, the Dutch Experimental Aircraft Association — part of an international cohort backing Zeferu’s endeavor.

It’s been a long and remarkable journey, and for the Ethiopian a successful flight will be a moment over 10 years in the making.

Refusing to take no for an answer

Zeferu, 35, says that ever since childhood he’d wanted to become a pilot. He was on the right track, but when the time came, Zeferu was denied for the most arbitrary of reasons.

Leaving Alemaya University with a Bachelor’s degree in Public Health, he tried to enroll at the Dire Dawa branch of the Ethiopian Airlines Aviation Academy.

“I couldn’t fulfill the air school height requirements,” he explains. Zeferu was a centimeter too short.

Despite this setback, Zeferu was unperturbed.

“I decided to build my own aircraft if I couldn’t be a pilot,” he reasons, “then I’d be able to fly high in the sky.” 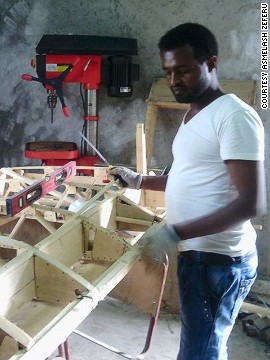 The first stage of his labor of love lasted 10 years. Aviation manuals and YouTube tutorials were his guiding stars; every aspect of aircraft manufacture gradually imbibed in painstaking detail.

When the time came, Zeferu opted to model his plane on one used by trainee pilots in the U.S. in the 1920s and 1930s.

Some items were salvaged, others bought second hand from the Merkato market in Addis Ababa. The 8.5 meter wing was crafted from timber imported from Australia, with each wooden panel hand-sculpted. But there was one element of the plane Zeferu could not imitate.

The design called for a Ford engine, but the amateur engineer “couldn’t get [it] cheap in Ethiopia,” settling instead for a four cylinder, 40 horsepower model stripped from a Volkswagen Beetle — since upgraded to a 78 behemoth at a cost of 12,000 Birr ($570).

But after a year and seven months Zeferu had finished. Not bad for someone who had “never stepped onto an airplane,” never mind worked within the aviation industry.

A second bite of the cherry 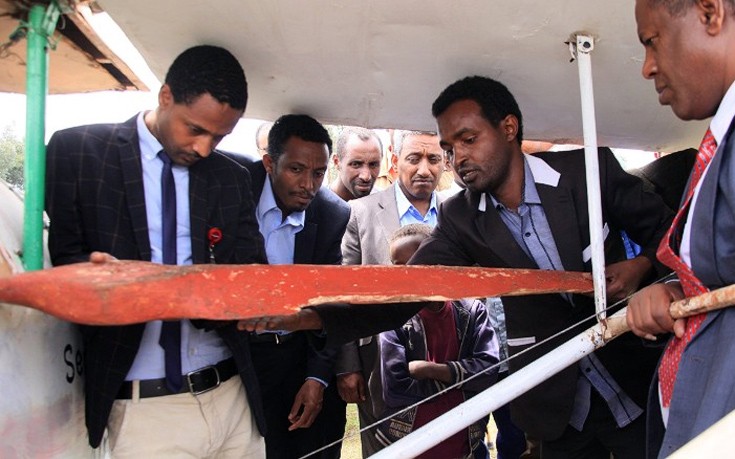 Zeferu’s earlier disappointments are now behind him and he’s ready to complete the task at hand.

In doing so he would take a seat among a pioneering group of amateur enthusiasts from the continent. Not all have been successful: Kenyan Gabriel Nderitu has attempted to take off 13 times, but like his dream, his plane has so far failed to fly. Nigerian student Mubarak Muhammed Abdullahi created his own helicopter in 2007 with parts stripped from, amongst other things, a Boeing 747. Abdullahi had more luck, and after lifting 2.1 meters off the ground went on to gain a TED Global Fellowship and an aircraft maintenance scholarship in the UK.

Zeferu has made some modifications after receiving advice from fellow flight enthusiast Rene Bubberman, chairman of the NVAV, the Dutch Experimental Aircraft Association.

“We gave him some well-meant advice about his prop and especially about test flying,” says Bubberman. “[His project] deserves a lot of respect… [it] truly breathes the spirit of the early airplane pioneers and his enthusiasm is contagious.”

On November 28, Zeferu will return to the same air field and rev his newly-modified machine. Taking off at 90 mph, the dizzying height he will aim for is 10 meters — not unreasonable considering he has “no parachute or anything to protect me.”

Zeferu demurs about the achievement of getting off the ground — he has other concerns. “To fly an aircraft is not a big deal,” he explains. “The greatest danger will be in landing.” 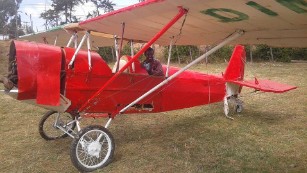 That will involve slowing the plane down from its cruising speed of 70 mph to 45 mph, then hoping the wheelbase — taken from a Suzuki motorcycle — holds out.

Asked how he has been able to train for this, Zeferu says YouTube flight simulators have been key.

If he does land safely, Zeferu will have overcome the most persistent obstacle in his quest for flight. Despite support from his family, he argues that “the biggest challenge in building my aircraft was the people around me… people calling me mad. People were asking ‘How can you build an aircraft in Ethiopia? In Africa?'”

He’s emphatic about his chances this time around: “I am very sure that I will fly.”

Touching the skies in his homemade airplane is only the first step for Zeferu. He hopes a flight school will accept him in the near future so he can train as a commercial pilot. However the long-term goal is to boldly go further still.

“My dream is to become an aerospace engineer at NASA,” he admits. “And I will be.”

If you were to ask someone what Michael Jackson song seems to be covered the most, some would say, “Eat It.” Then once they realized they mistook “cover” for “parody,” they would probably answer with “Smooth Criminal.” The rock band Alien Ant Farm has covered it. A pre-Flash Grant Gustin covered it on Glee. Last month, we even posted a video of it being covered with traditional Japanese music. Once, […]