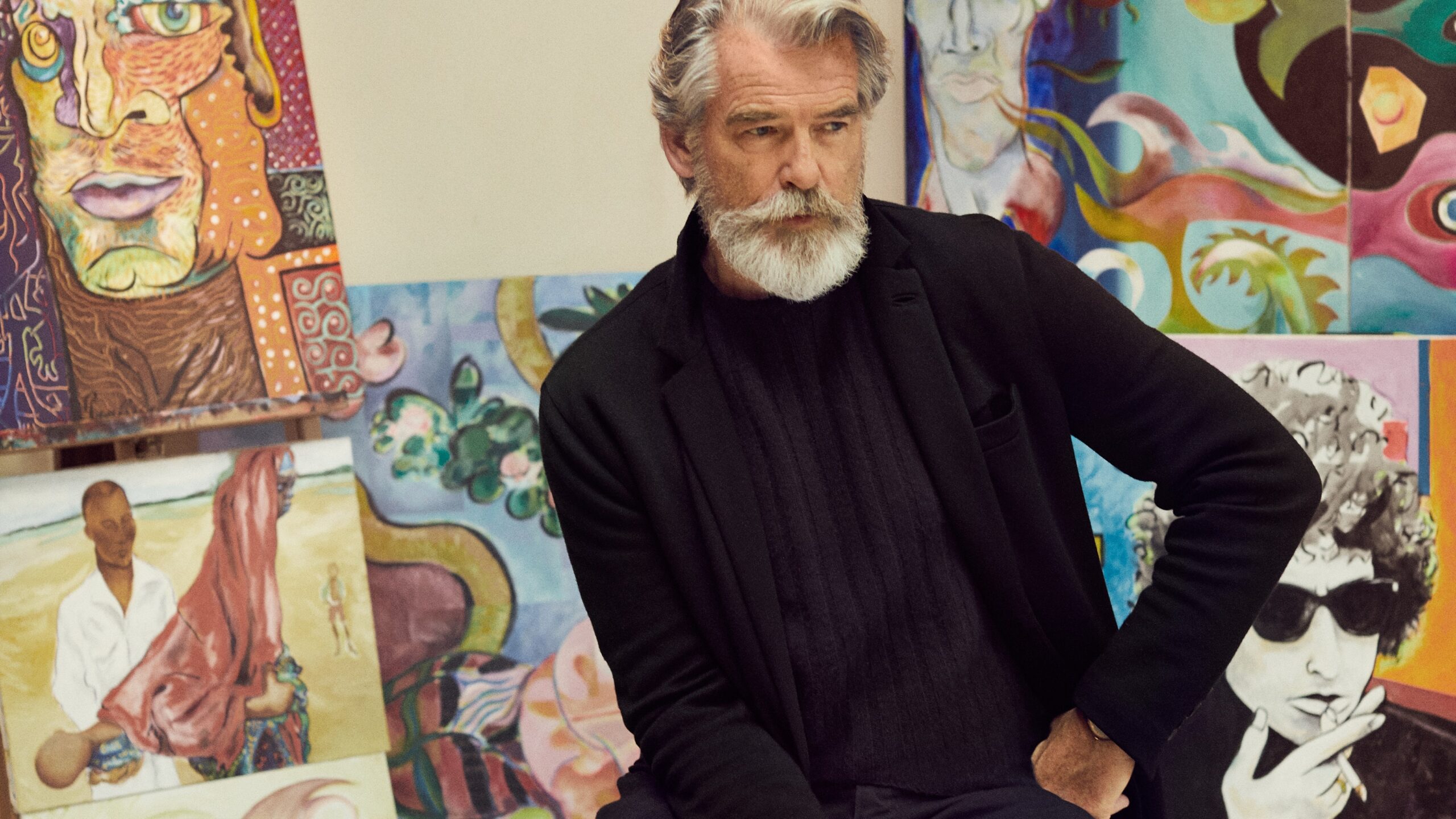 The James Bond star took to Instagram on Sunday to share a number of pieces with his 1.6m followers, writing: ‘I do ponder at times whether to show the work slowly practiced since one dark night in 1987 when I first began to paint.

‘However as my darling wife Keely says, you’re only going to paint so many in your life time. So come year’s end I shall have my first art show in LA…if not now when? Time to let them go.’

The star posted 10 of his creations on the social media site, posing alongside one of the paintings as he rested his face in his hand just like the subject of his piece.

The Irish screen legend had swept his salt and pepper hair back off his face and trimmed his beard so he looked smart for the photo.

He wore a navy blue top and matching scarf as he posed alongside the painting which could easily be mistaken for a Picasso.

Pierce posted a range of his other pictures on Instagram, but let the art do the talking as he stepped aside.

One image showed a man wearing what appeared to be a necklace made of Swiss cheese as he stood on a tropical island beneath the moon.

Another showed a man in a purple jumper with a multi-coloured face as he stood against a monochrome background.

Meanwhile, another work showed a person standing with their hand close to their very detailed heart, showing all the parts from the ventricles to the valves.

And in another piece, Pierce appears to have painted some simple instructions on how to insert an earplug, with a basic but graphic display of the process.

Pierce spoke about his passion for art in an interview last year and shared his plans to have an exhibition in Santa Monica, California.

He revealed that his wife, Keely, 56, had a documentary aired at the Cannes Film Festival, and when organisers discovered Pierce was a painter, they asked him to auction an artwork for amFAR – a charity supporting AIDS research.

In an interview with Parade magazine, Pierce said: ‘I’d done a painting of Bob Dylan, who is a great hero of mine.

‘It sold for $1.4million (£1.1million) and Keely and I just danced into the night. If it could be like that all the time, I definitely would give up the acting game.’

Pierce took up painting in 1987 when his late wife, Cassandra Harris, was diagnosed with ovarian cancer. Their daughter Charlotte died of the same disease in 2013 at the age of 41.

He also praised his second wife Keely for ‘directing’ his life for 25 years. The couple have two children – Dylan, 23, and Paris, 19.

Along with Dylan and Paris, Pierce is also father to son Sean, 36, by Cassandra and is also the adoptive father of Charlotte and Christopher Brosnan, Cassandra’s two children by her first husband Dermot Harris, whose brother was Richard Harris of Harry Potter fame.

Pierce has often been vocal about how Keely saved him from depression following his personal tragedies, describing her as a strength ‘I wouldn’t be able to live without.’

Pierce is now a proud grandfather of three – Charlotte’s children Isabella, 21, and Lucas, 14, as well as Sean’s daughter Marley May, four.

Get ready to make some noise! To celebrate World Emoji Day, Facebook is giving a voice – or rather sounds – to some of its emojis. The platform has unveiled Soundmojis – emojis that make sounds – for users to send via Messenger. Emojis are a key part of social networking, especially on Facebook. Thus, to mark World Emoji Day on Saturday, July 17, Mark Zuckerberg’s platform has announced the […]