As we tread the increasingly blurred line of fact and fiction, explore the sci-fi film tech stepping off screen and into reality

Within widespread received opinion, science fiction, literary or cinematic, was thought to be an artistic genre that could explore beyond the realms of reality; it could lead us to places which transcend human existence. However, it is becoming increasingly apparent that sometimes truth is stranger than fiction (or, at least equal to it). The thing is, the tremendous – but, in some ways, seamless – velocity that technology advances at, means that we rarely have time to compute it. As such, the implications of drones, driverless cars, and wearable technology have yet to be fully explored.

English novelist JG Ballard, a pioneer of science fiction writing himself, observed that, the modern age has already exceeded the visions imagined by science fiction by the end of the 20th century. It is certainly difficult to argue with this view when you consider the amount of predictions in science fiction that have since come true. So, in concurrence with the BFI’s ongoing season Sci-Fi: Days of Fear and Wonder, a season celebrating the genre, we look at some of the best sci-fi film predictions that have become sci-fact.

SCI-FI: The Nutri-Matic machine from The Hitchhiker’s Guide to the Galaxy (2005) allowed users to instantly synthesise any drink that they desired.

SCI FACT: Going one step further, NASA is developing a 3D food printer to use on long-haul space flights, such as missions to Mars. The technology is sufficiently advanced that it’s already been used to make an exemplar “printed” pizza.

SCI-FI: In Blade Runner (1982), the police car used by Rick Deckard (Harrison Ford) was capable of flying, vertical take off, and ground travel.

SCI-FACT: US Company Terrafugia have created the first prototype of a flying car called The Transition, which meets with both aviation and ground traffic standards. But with an expected price tag of about £180,000, it’s not exactly ready for the wider public.

SCI-FI: In Terry Gilliam’s The Zero Theorem (2013), Qohen (Christoph Waltz) dons a cyber gimp suit that allows him to indulge in digital-conjured smut.

SCI-FI: Back to the Future II (1989) saw young whippersnapper Marty McFly glide around on his hoverboard.

SCI-FACT: Arx Pax, a company from California, is now offering the hoverboards for $10k on its already-successful Kickstarter campaign. The drawback is, the hoverboard – named the Hendo – can only float for round 15 minutes, and even then, requires a surface of non-ferrous metals such as copper or aluminium.

SCI-FACT: While not quite on the same scale, Chinese company Dexta Robotics has created an exoskeleton called Dexmo to be worn on the hand. It has the ability to control robots, as well as interact with virtual objects.

SCI-FI: The 1956 film Forbidden Planet follows a space crew who arrive at a mysterious planet, and are attacked by a monster that can make itself invisible.

SCI-FACT: Earlier this year, scientists at Rochester University developed the first optical cloaking device, capable of bending light around 3D objects, so that it’s possible to see a clear image of what is behind, even when viewed from various angles.

SCI-FI: In Neill Blomkamp’s apartheid-influenced District 9 (2009), the mother ship uses an illuminated array of tractor beams to move around rocks.

SCI-FACT: As of last month, laser physicists at Australian National University have built a reversible tractor beam that can draw in tiny particles. The laser has the ability to both repel and attract objects by forcing air particles to collide in certain areas.

SCI-FACT: Microsoft reached a breakthrough this year in their technology development with Skype. In real-time Skype Translator can mindblowingly translate conversations into different language, depending on the desired outcome.

SCI-FI: In Dune (1984), the Harkonnen House install a heart plug into every member of their clan. If desired, the plug can be controlled to kill the person at any time.

SCI-FACT: Kevin Warwick’s cyborg implant isn’t deadly (not yet, at least), but the professor of cybernetics at the University of Reading does have the ability to operate doors and turn on lights, after inserting a microchip into his arm.

SCI-FI: In John Carpenter’s subversive masterpiece They Live (1998), the protagonist Nada is confronted with subliminal, personalised advertising everywhere he goes.

SCI-FACT: Targeted advertising is very much established these days, but now it has been supplemented by facial recognition technology, which determines a customer’s gender and general age. It’s even already in use in UK petrol stations. 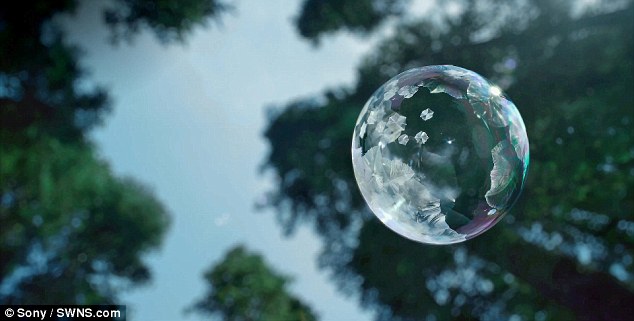 Video was directed by Leila and Damien de Blinkk in Whistler, Canada. They used 4K cameras to record crystal-like structures of ice forming. As these structures spread, they are shown creating a solid outer shell. Film then records bubbles shattering, and shards of ice falling to the ground. An incredible phenomenon has been captured on video for the first time as washing-up bubbles are shown freezing in mid-air. The footage, filmed on cameras […]