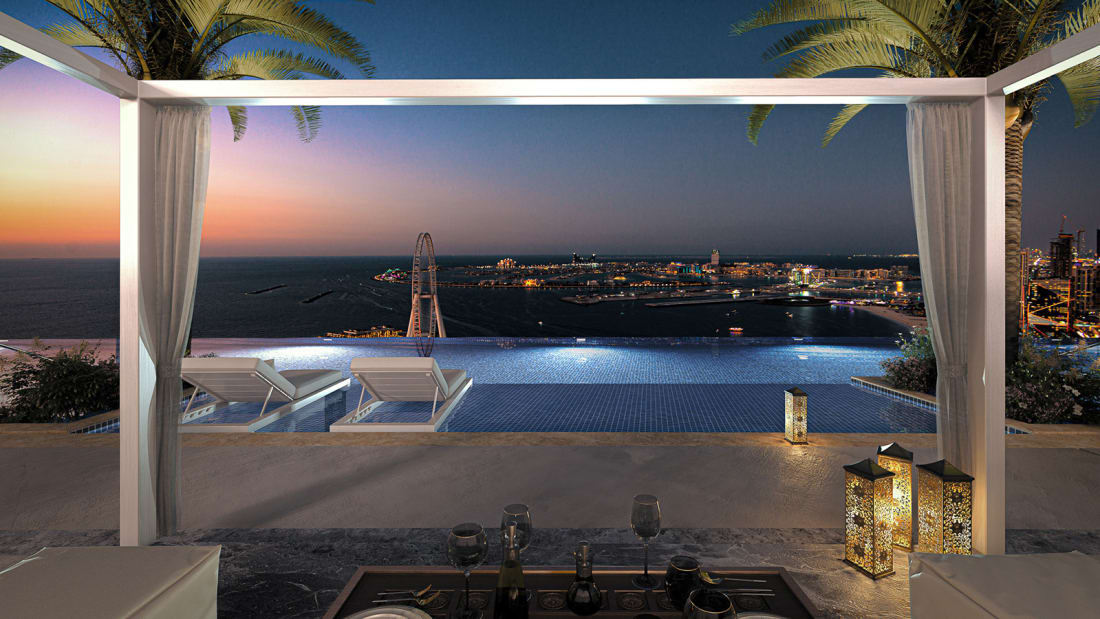 There are few feelings as liberating as swimming in the open air, below blue skies that stretch all the way to horizon — and now in Dubai you can do it nearly 1,000 feet above sea level.

Named in March as the world’s tallest infinity pool inside a building, the rooftop bathing spot at the newly opened Address Beach Resort is a vertiginous 293.906 meters high (964 feet and 3.1 inches).

That’s about nine-tenths as tall as the Eiffel Tower. Oh la la.

This ain’t no paddling pool either — at 94.84 meters in length and 16.5 meters in width, it’s nearly twice as long as an Olympic-sized pool.

Although guests might want to relax on their training for Paris 2024 and just soak up the panoramic views of the brand new Ain Dubai ferris wheel — the world’s tallest — and the white sands of Jumeirah Beach.

The pool is only open to hotel guests, aged 21 and older, but you can get the vistas without slipping into a swimming costume by booking a table at the adjacent rooftop restaurant, Zeta Seventy Seven. The Asian Fusion restaurant is so named because it and the pool are both on the hotel’s 77th floor.

Impressive as all this is, it’s not even the only Guinness World Record held by the resort. Nor are the impressive sights restricted to the those on the upper levels.

Address Beach Resort, along with Address Beach Residences, is housed in a set of two towers connected at their base and again by a skybridge from the 63rd level to the 77th.

The skybridge, which is home to luxury apartments, is at 294.36 meters (965.7 feet) the world’s highest occupiable skybridge floor.

This beachfront property, known as Jumeirah Gate, opened in December 2020 and is another striking architectural addition to the already bustling Jumeirah skyline.

After all, it often feels like a tourist attraction daren’t open its doors in the emirate without having at least one record-breaking claim to its name.

Federico Rota, deputy CEO of Al Ain Holding, said of the wins, “Staying true to our testament to developing landmark projects, we are proud to be breaking two Guinness World Record titles with the Address Beach Resort.

With state-of-the-art construction and groundbreaking amenities, this development has set new standards in luxury lifestyle and hospitality.”

May will see also see the opening of another record-breaking pool, London’s new Sky Pool next to the US Embassy on the south bank of the River Thames.

The Sky Pool is a 82-foot (25-meter) transparent swimming pool stretched between the 10th stories of two residential skyscrapers — and it’s the largest freestanding acrylic pool structure in the world.

It’s a little harder to get into than the Address Beach Resort pool, though — you have to be a resident of the $1.4 million apartments.

A surge in interest for large-screen slates has prompted the company to inject an “Entertainment Space” into the user interface. Last summer Google introduced a content hub for select Android tablets called Kids Space to help children and their parents find age-appropriate books, games, and videos. Now the company is doing the same thing for adults.  In what's possibly the biggest change to the Android tablet experience since 2011, Google's new Entertainment Space is […]