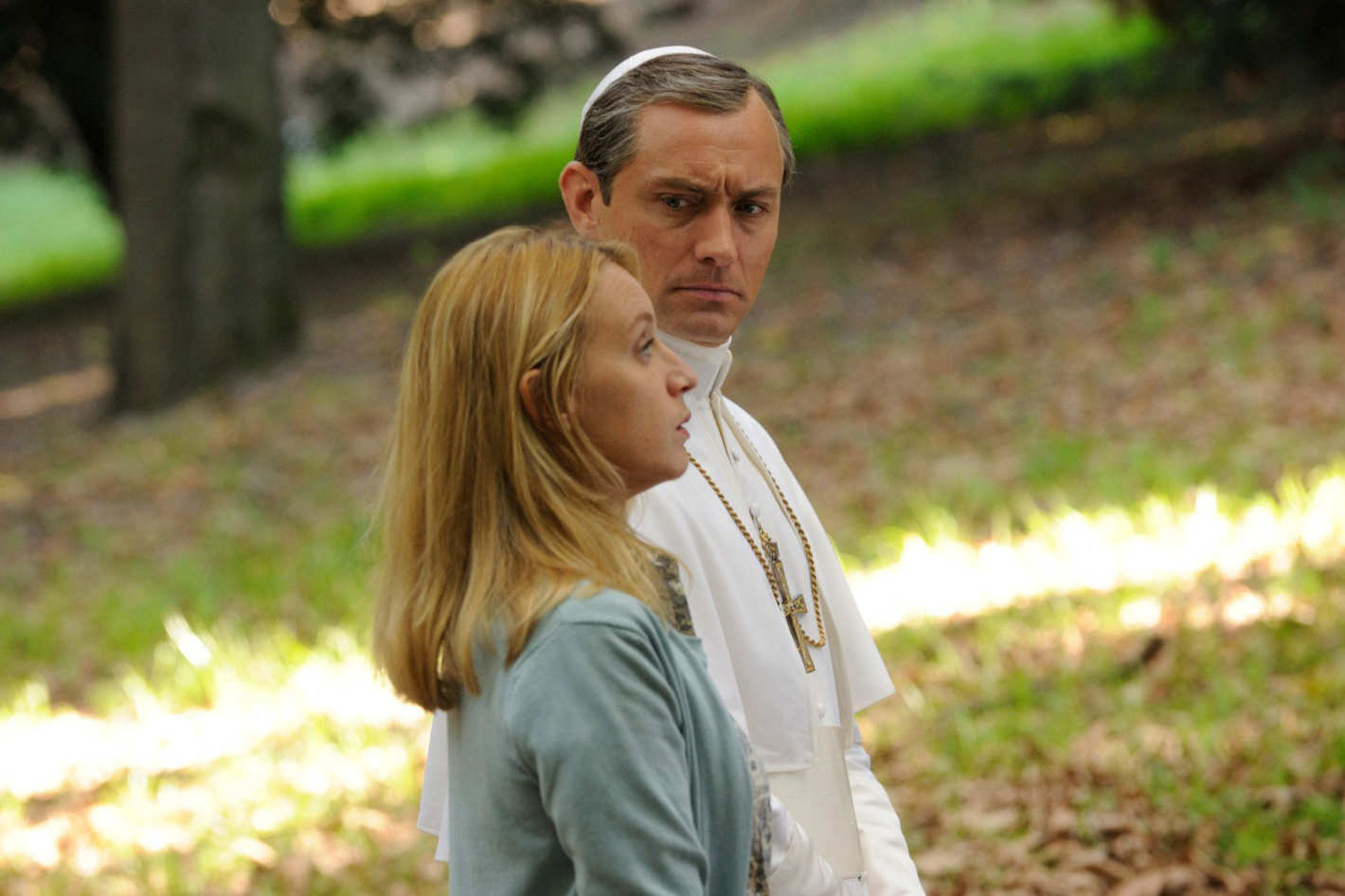 The hits just keep coming on The Young Pope tonight, so buckle in. We have a lot to cover.

We open with an extra-despondent Voiello, wearing his team’s soccer uniform (complete with “VOIELLO 1” on the back) and glumly clutching a rosary. His beloved Napoli has lost, but his real concern is the papacy. He calls a meeting with the world’s oldest cardinal, Caltanissetta, who refers to “this losing retrograde battle against homosexuals” as a threat to the very survival of the Church, especially in the wake of young Angelo Sanchez’s suicide. Voiello, for his part, is now prepared to use the boob grab photos he had OBVIOUSLY made a copy of earlier, forcing Pius’ resignation to install either Spencer or Old Cardinal Caltanissetta in his place. Alas, Old Cardinal is very definitely against it. The photos, he says, would destroy the Church along with Pius. They will have to find another way.

The flaw in Pius’ armor this episode will be exploited by a very surprising source — two of them, really. First, Tomasso goes to see Sister Mary (in what he believes to be a cloak-and-dagger fashion, bless his pure heart) to report with the shock and horror we’ve come to expect of him that Pius is having a profound crisis of faith and no longer believes in God.

This. Is. When. Something. Amazing. Happens.

You may or may not be familiar with the hit Broadway musical Annie — and its subsequent film adaptations Annie (1982) and Annie (2014) — in which a plucky young red-haired orphan uses the power of positive thinking and her natural hustle to eventually move on up to riches and a family. Here’s what you need to know at this particular moment: 1) IT’S THE BEST, and 2) This episode on The Young Pope exactly recreates a major plotline.

I’ll use the 1982 movie as our touchstone to lay out how.

Annie: The orphan has long been waiting to be reunited with her really-not-dead-but-maybe-dead parents, who left half a necklace in the possession of Orphan Wrangler Miss Hannigan (played by Carol Burnett), promising to return someday with the other half of the necklace to claim their precious child.

Young Pope: Pius has been hanging onto half of a broken pipe his dad left with him at the orphanage, and he feels very emo about it, always longing for a reunion.

Annie: The unscrupulous Tim Curry and Bernadette Peters, angling to claim the reward money Daddy Warbucks has put up for Annie’s parents, get Miss Hannigan to give them the second half of the necklace — which of COURSE Miss Hannigan has been hanging onto because Annie’s parents are dead. They use the necklace to claim the child, but Daddy Warbucks saves her and it all works out.

Young Pope: Sister Mary, to assist Voiello by hopelessly distracting the pope from his duties so he’ll randomly sign Church documents, sends Pius the second half of the pipe in the mail and then PAYS TWO ACTORS to pretend to be his parents. They even invent a handy little story about the pipe! Pius is, as you can imagine, intensely compromised by the emotion of the whole situation, does indeed sign whatever he’s given, and finally figures out the ruse after smelling his “mother.” It made me really sad for Pius and pretty pissed with Sister Mary, honestly.

(That’s the end of the Annie homage, by the way. Back to our regularly scheduled Vatican intrigue.)

With one scheme blown to pieces, Voiello and Spencer and Caltanissetta have a council of war. Voiello still thinks Esther is the key, or perhaps could be used to manipulate Pius’ obvious yearning to be a father. (Later, there’s a rather touching moment in which Pius tells Andrew that priests are eternally sons, as they can never be fathers. Also, he changes Baby Pius’ diapers, suggesting that there is no man so shitty that I don’t find it mildly endearing for him to do some sort of baseline task for a kid.) It’s going to be Pope Spencer if they pull it off, with both Voiello and Caltanissetta kissing his ring. Spencer is so. Damn. Thirsty. I will burn this mother down if he becomes pope.

Andrew, feeling particularly lonely, finds himself at the sexy society party he was invited to in the previous episode. It is VERY Eyes Wide Shut. Rich Italian women wear such fancy clothes and accessories and have a lot of hair and makeup! Unable to move on from Sanchez’ suicide, he gets EXTREMELY drunk and can only giggle as the Sophia Loren-looking hostess takes her clothes off and tries to get him to have sex with her in the bathroom. Later, after Andrew takes an ill-advised dip in the pool, she packs him off home with her son … who, in a VERY jarring scene, attempts to rape him in the car. The son eventually gives up and pushes him out onto the streets of the Vatican, mostly naked. The son looks exactly like Eric Trump, which is not important, just a fact.

A sobered-up Andrew takes Pius to the site of Sanchez’ suicide and explains how bad the new priest admission policy is, and says “and now he’s dead.” In a CLASSIC PIUS MOMENT, he responds, “Lucky him,” and Andrew is like, “Screw this, I want to go back to Honduras.” Tomasso, in turn, has a hissy fit at Pius, which has been a long time coming.

In the papal residence, Pius sits down for dinner with Voiello, and switches their respective dinner plates in case Voiello has attempted to poison him. Smart, paranoid, or both? Voiello is like, “Bro, when I get rid of you, it’s gonna be way more subtle than that.” Pius asks Voiello who pulled the scam with his fake parents. Voiello demurs. Pius asks Voiello what document he had him sign. Voiello informs him it was meant to “streamline” the ordination of priests, undoing the policy that resulted in Sanchez’ suicide.

Pius: “Did we kill that young man?”

It’s been a big episode already, but now it moves to the next level, so stay with me.

Andrew, clad in civilian garb, leaves the Vatican and hops back on a plane to Honduras. HE OUT. His gorgeous girlfriend meets him at the airport with a flat, “He knows.” Oh. Oh, shit. To be fair, you WERE sleeping with a narco wife, my friend, which is not a position with a lot of room for advancement. If I were Andrew, I would be running back to the plane IMMEDIATELY, but the dummy goes ahead and gets in the car.

The narco in question, Carlos García, is played by Tony Plana. You may remember him, among many other things, as Ugly Betty’s dad. Well, kids, he ain’t Ugly Betty’s dad anymore. He gets a BANGER of a scene. If Andrew had denied Carlos Communion, railed against him from the pulpit, and so forth, that would have been fine. He’s a man of God! It’s his job. Carlos gets it. There would have been no need for … violence.

Andrew has not yet soiled himself, somehow.

But that’s not what happened, Priest Boy! You were sleeping with his WIFE. “My profound religiosity tells me I should forgive you, BUT…”

This isn’t even a situation that’ll get you martyr’s crown in heaven. So, yeah, it’s pretty bleak.

We briefly return to the Vatican, where Pius tells Spencer he’s going to resign — fat chance! — so Spencer races home to begin working on his first homily and literally posing in front of the mirror and working on his PopeFace. BUDDY.

Sister Mary and Pius sit together. She calls him Lenny again, for the first time since he asked her to stop. He tells her his papacy is a failure, and she reminds him he’s a beautiful saint and “the sweet Christ come back to Earth.” He knows it was her, with the parent maneuver, and I’m all ready for a Fredo moment, but instead he simply thanks her, and says that her betrayal gave him one brief flash of pure happiness, and was the loveliest moment of his life.

We get a second to bask in the depth of their love and ultimate understanding for each other, and then we’re back in Honduras, as a gut-shot dead Andrew gets dragged out of a luxury SUV and dumped by the side of the road. RIP.

Gmail is dumping Windows XP and Vista, now what?

Life isn’t getting any easier for holdouts on Windows XP and Vista. Google recently announced that Gmail would stop supporting Chrome version 53 and lower by the end of 2017. The move specifically impacts XP and Vista since Google capped support for both of those systems at Chrome v49. So what does this all mean for XP and Vista users? Is Gmail going to stop working in Chrome? Not exactly, […]