From prestige dramas about prejudice and tragedy to Vin Diesel motorbiking off a moving bus, here’s what you’ll be seeing over the next month

Ah yes, January – when Oscar hopefuls platforming into wide release meets the sort of stuff that studios treat like dumpster fires. (Monster Trucks, coming soon to a theater near you!) But this upcoming month has more to offer than you might assume, with a number of worthy prestige films getting bigger audiences and well-pedigreed indies making their debuts. That, and Vin Diesel motorbiking off of a moving truck. Here’s what you’ll be plunking down ticket-money for at the theater over the next few weeks.

The Founder (Jan. 20th)
Imagine The Social Network, but with Big Macs instead of clicks. Here comes ruthless businessman Ray Kroc (Michael Keaton, battery acid running through his veins), who meets a pair of good ol’ boys by the name of McDonald and sees the potential for boundless profit in their tightly-run fast-food shack. After a little fast-talking and some confusingly-worded contracts, he’s successfully talked the brothers out of their life’s work and begun construction on his automated empire. Aggressive corporate expansion, remorseless double-crossing, and automated cheeseburgers – what could be more American than that?

Gold (Jan. 27th)
Matthew McConaughey added 40 pounds and donned a heinous balding-combover hairpiece to play Kenny Wells, a hardscrabble businessman who comes upon an unexpected windfall. While journeying through the jungles of Borneo with a geologist (Édgar Ramírez), the pair discover a massive cache of gold; cue instantly shooting into the uppermost tax bracket. But sudden, hard-to-believe influxes of wealth and sketchy stock-market practices always attract the attentions of the FBI. Writer-director Stephen Gaghan (Syriana) marries a nature-set adventure with a rags-to-riches narrative ripped from the headlines. Did we mention  McConaughey is wearing a fake-follicular nightmare on his dome?

Hidden Figures (Jan. 6th)
John Glenn got all the fame and glory for his historic full Earth orbit, but none of it would have been possible without three fiercely intelligent, trailblazing African-American women. The power trio of Taraji P. Henson, Octavia Spencer and Janelle Monáe star as mathematicians working in the segregated West Area Computers division for NASA, accelerating America’s progress in the Space Race. They faced a double-whammy of discrimination, but with keen intellect and indomitable spirit, the women secured America’s technological superiority while breaking down barriers for future generations in STEM fields. It’s the fill-in-the-gap history lesson you need.

I, Daniel Blake (Jan. 6th)
Like a trip to the DMV that gradually slides into a Kafkaesque bureaucratic nightmare, director Ken Loach’s latest social critique takes aim at the indignities of Britain’s welfare system. A crusty but benign coot (Dave Johns) just wants to get his disability pay. The only thing that stands in his way are kilometers of red tape, a system designed to stymie payouts and an uncaring state. He makes the acquaintance of a down-on-her-luck single mother (Hayley Squires), and little by little, they find some small solace in one another. The film didn’t take the Palme d’Or at Cannes for nothing; there’s genuine rage in this screed against federal BS.

A Monster Calls (Jan. 6th)
Kleenex should expect a bump in sales, given this fable is a nuclear-grade eye-moistener. Juan Antonio Bayona fires up the waterworks with the story of Conor (Lewis MacDougall), a boy coping with his mother’s losing battle against cancer by summoning a gigantic monster made of gnarled tree branches. Felicity Jones shrinks down to a wisp of herself as his leukemia-stricken mom; Sigourney Weaver is the draconian grandmother who takes him in; and Liam Neeson lends his sonorous bass to the voice of the twig-monster.

Patriots Day (Jan. 13th)
They brought the hurt to insurgents and dissected an oil spill in the Gulf of Mexico; now Mark Wahlberg and director Peter Berg team up for a drama that details the ins and outs of the Boston Marathon bombing. Massachusetts’ favorite son plays Tommy Saunders, a police sah-geant on the scene when tragedy strikes and the people of Boston go into a panic. Soon, the brave cop and the rest of the boys in blue are scouring the suburbs for the culprits. It’s a tribute to everyday blue-collar heroism, though the recreations of the traumatic aftermath is like one long trigger warning for people who endured this domestic terrorist attack.

The Red Turtle (Jan. 20th)
As far as many folks are concerned, Japanese animation house Studio Ghibli is Hayao Miyazaki; here’s the film that will correct that notion. Dutch-British animator Michaël Dudok de Wit delivers an uncommonly strong feature debut with this entirely dialogue-free desert island fantasy about a man washes up on an island paradise and encounters a certain oddly-colored marine reptile. Minimalism is the name of the game, both in the simple yet ravishing artwork and the stripped-down story – this is also comfort-food cinema, soothing in its quiet grace.

Split (Jan. 20th)
James McAvoy sets the bar on actor versatility for 2017 with M. Night Shyamalan’s latest; he plays unstable young man with 23 distinct personalities (!), ranging from a playful nine-year-old to a mysterious feral force dubbed “The Beast.” He’s also just abducted three teenage girls (Jessica Sula, Haley Lu Richardson, and The Witch‘s Anya Taylor-Joy) for use in a ritual, though the sinister purpose remains unclear to the captives. Early reviews out of festival showings have inspired good word-of-mouth; McAvoy appears to be having the time of his life in the trailer. It’s never too early in the year for a good scare, right? 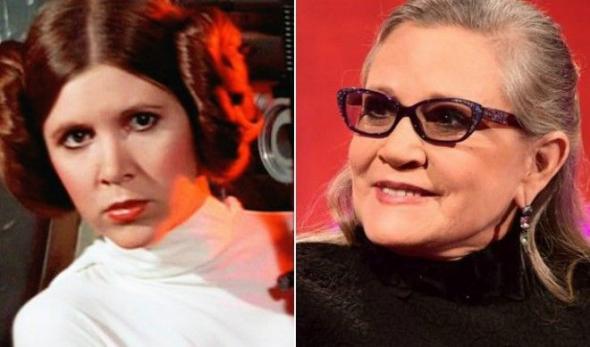 The daughter of Debbie Reynolds and Eddie Fisher, she carved out her own idiosyncratic career as a truth-telling Hollywood wit. Carrie Fisher, the actress and writer best known for her iconic role as Star Wars’ Princess Leia, died Tuesday morning after suffering a heart attack four days earlier while onboard a flight from London to Los Angeles. She was 60. Family spokesperson Simon Halls confirmed the news to The Hollywood […]