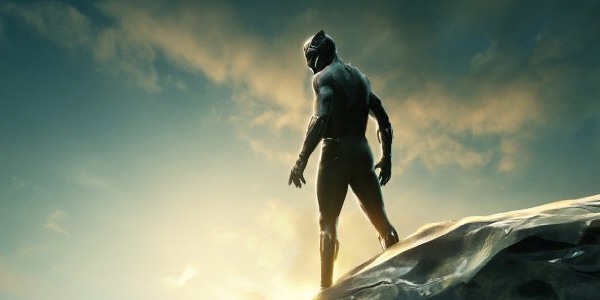 Last month, Marvel Studios took us completely by surprise when they used the televised NBA Finals to debut the trailer for writer/director Ryan Coogler’s Black Panther. It was a stunning first look that made us insatiably hungry for more — and tonight we got just that in the form of extended footage that was showcased during Marvel Studio’s big Hall H panel at San Diego Comic-Con.

The footage began with an ordinary enough image — with two guards standing behind a metal detector, but it’s the arrival of T’Challa (Chadwick Boseman), Nakia (Lupita Nyong’o) and Okoye (Danai Gurira) wearing some killer fancy dress. As they pass though security, a pair of double doors are opened for them and we see the location where they have arrived: an underground casino. While the intentions of the Wakandan trio aren’t immediately clear, when they split up we learn that they are not on the premises for the purposes of fun. Instead, this is some kind of sting operation.

T’Challa and Nakia patrol the ground level while Okoye scopes things out from above, and while the former walk around the tables we learn two things. One is that they are not alone, with Everett K. Ross (Martin Freeman) also on the scene; and the second is that their target is none other than Ulysses Klaue (Andy Serkis). Okoye works to secure the exit, and over coms they discuss that there aren’t supposed to be any weapons allowed inside.

Spotting Klaue and his large entourage, Everett Ross approaches him and makes a joke about the notorious thief/arms dealer having new mixtape dropping — but it kind of backfires as Klaue offers to send him a sample. Ross corrects him, noting that he was just acknowledging the size of the group, but the villain assures him that they are just there to gamble. Dismissing the small chat and getting down to business, Klaue asks the undercover agent if he brought the diamonds, and fakes a laugh as Ross makes a joke about the briefcase being heavier than he expected. It’s during this sequence of shots that we see that Klaue is now sporting a brand new fake arm (given that Ultron cut off his original one in Avengers: Age of Ultron). Ross asks him for the Vibranium they are trading for, and Klaue pulls the precious metal from his fly — placing the paper-wrapped product marked “Fragile” on the table next to him.

With the deal going down, Nakia urges T’Challa and Okoye to action, but the number of guards causes them to question the plan. Unfortunately, their options are taken away from them when Okoye is noticed by a member of security and has to switch into ass-kicking mode. She activates her concealed spear, which grows to full length in an instant, and she proceeds to knock the snot out of two attackers — kicking one over the balcony. As the place erupts into chaos, the other Wakandans begin fighting as well, both taking out Klaue’s men with beautiful fight choreography while innocent bystanders rush to get away. Klaue shoots at Ross, but the agent is successfully able to deflect the bullets with the diamond-filled briefcase.

Klaue runs up the stairs to try and get away, but this isn’t happening on T’Challa’s watch. Screaming “Thief!” in Wakandan, the African king leaps from the floor to the balcony railing thanks to his heart-shaped herb-enhanced strength, and confronts his foe. Unfortunately for T’Challa, Klaue’s new arm is revealed as no ordinary prosthetic, and as it opens up to reveal an insanely dangerous-looking weapon, and as he charges it up to fire he says, “You know, you look just like your old man.”

With the extended sequence over, the Black Panther footage then moved to material cut similar to a trailer — and while it’s harder to describe everything that went down, there were some fantastic reveals. This is a list that includes sequences of ritual combat; T’Challa suited up and riding on top of a car driven by his younger sister, Shuri (Letitia Wright); more showdowns with Ulysses Klaue; and even the hero leaping from an airplane. Perhaps the greatest thing in all the footage, however, was the reveal not only that Black Panther now has a suit that he can summon instantaneously, but that Erik Killmonger (Michael B. Jordan) has one as well. The last scene of the footage saw the two opponents go head-to-head in their respective costumes, with the final shot following them as they plummet down a waterfall attacking each other.

Unfortunately for those who weren’t in Hall H tonight, the Black Panther footage isn’t going to be officially released — but take it from us that we look to be in for something special with this film. The settings and character dynamics present in the footage are unlike anything we’ve seen from a Marvel Studios film before, and it looks like Ryan Coogler has successfully constructed a stunning vision of Wakanda. The film can’t get here soon enough.

We still have a whole other Marvel Studios film to catch before we get to see Black Panther, as Taika Waititi’s Thor: Ragnarok will be heading to theaters in November, but the reality is that February 16, 2018 can’t get here soon enough. Hit the comments section below with your thoughts and expectations for the blockbuster, and stay tuned here on CinemaBlend for all of the latest updates!

The Samsung Galaxy Note 8 is due to debut on August 23rd, after Samsung begun sending out press invites to its Unpacked event earlier this week. Now the rumor mill is going into overtime to drum up some hype on the new device that Samsung will be unveiling in about a month’s time. Now, according to well-known leakster, Roland Quandt, it looks like the colors for the Galaxy Note 8 have been unveiled already. […]