‘BlacKkKlansman’ Was The Most Frighteningly Accurate Movie Of 2018 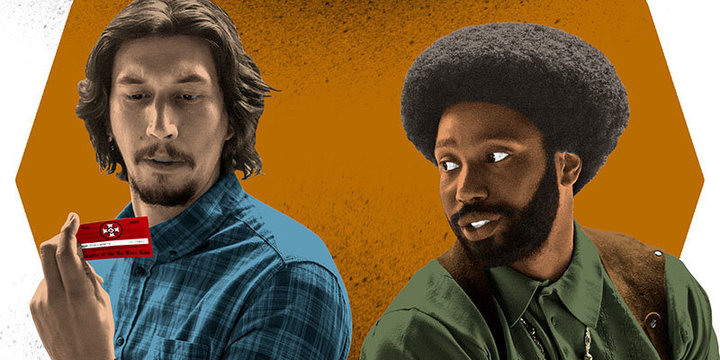 To mark the end of 2018, we asked writers to revisit some of the year’s most noteworthy (for good or evil) events, people and ideas. See the other entries here between now and the new year.

2018 was a year overstuffed with culture. That’s just the way it is now, movies and TV and songs and memes and thoughtful features and endless, endless politics scrolling past our weary eyes at the speed of silicon and too-blue light.

But in all the chaos there’s a moment where my hazy memories of frenetic consumption pause, for a piece of filmmaking that called on me to think hard and to remember. That movie was Spike Lee’s “BlacKkKlansman.” It’s currently raking in a modest haul of awards, but for me, it’s going to linger long past the last bottle of popped January 1st champagne, a remarkable slice of light to which I’ll return for years to come.

Much has been said about the film ― its ambition, historicity and panache have been amply noted. But I’ve elected to discuss it here because I admire it as a piece of artistry and as a salvo launched at the perfect cultural moment.

The film is about a pioneering black cop who confronts the Ku Klux Klan, providing the voice of a would-be Klansman on the phone while his Jewish co-worker offers a white body to attend the meetings in person. Any summary would be a bare gesture at the substance of the movie, which deftly conjures up the early 1970s with both winking kitsch and careful verisimilitude. “BlacKkKlansman” delivers more than any blockbuster ever needs to, filling its slick packaging with layers of complexity that Hollywood rarely allows for.

‘BlacKkKlansman’ delivers more than any blockbuster ever needs to, filling its slick packaging with layers of complexity that Hollywood rarely allows for.

The film addresses the conditional whiteness of Jews in America; the ways in which the presumed fragility of white womanhood can provide a shield for those who would do violence; the vitality of student activism, and the way it forms an irresistible target for those who would silence dissent; and the role of music, rhetoric and film itself in shaping black and white identities. It does all this and so much more, wrapped in a compulsively watchable package.

There’s a bravura quality to it, a bracing reminder of the need to combat racism in both its most overt guises ― Klansmen burning crosses ― and its subtler incarnations, as when rookie black cop Ron Stallworth faces an array of racist behaviors at his new workplace, from skepticism to outright slurs.

In 2018, a tide of racist hostility is surging around the globe, sloshing through social media like sewage. It has provoked violence against non-white people and produced hateful government policies. Facing this onslaught, even as an ally committed to fighting racism rather than its primary target, can be demoralizing. It’s tempting to throw up our hands and fall back into lassitude.

But “BlacKkKlansman” burns through resignation with its narrative of struggle and triumph, offering a powerful example of how art can shore up the flagging will of those who would seek justice. And it has a hell of a soundtrack.

Some critics have cast a skeptical eye on the film’s portrayal of heroic cops teaming up to take down white supremacy. As recent reporting from the New York Times Magazine revealed, law enforcement has been extraordinarily slow to take on our contemporary wave of white supremacy, even when it reveals itself in violence. As anti-fascist journalist Elizabeth King put it in a feature on the links between police and white supremacists, “police have often served as the shock troops for white supremacy, and have directly supported far right groups.”

“BlacKkKlansman” is based on real events, but still, to those who have watched countless images of police brutality looping through our social media feeds since the advent of the Black Lives Matter movement in 2014, or paid attention to external reviews of police departments from Ferguson, Missouri, and elsewhere that revealed staggering patterns of systemic racism, there’s a jarring incongruity to a story in which police are the heroes in the struggle against white supremacy.

But one lesson of 2018 ― a year that saw a seismic midterm election in which broad coalitions took to the ballot box to rebuke a common enemy in Donald Trump’s Republican Party ― is that the tools of righteous struggle are usually imperfect. In Lee’s movie, Stallworth uses the institutionally racist Colorado Springs Police Department to take down a racist terror plot. In 2018, voters across a broadly left ideological spectrum used a gerrymandered, inclined-to-voter-suppression and fundamentally non-representative electoral system to make a change in the country’s balance of power.

In moments of emergency, coalitions of necessity, bringing together dissonant and flawed ideologies, can move shoulder to shoulder toward a common goal.

In moments of emergency, coalitions of necessity, bringing together dissonant and flawed ideologies, can move shoulder to shoulder toward a common goal.

And as the year has drawn to a close, the notion of a necessary struggle, fought with any tools available, however chipped and dented, however rusty and cracked, has struck me again, and I’ve remembered, over and over, scenes from a film that captured so many aspects of America’s perennial racial tensions. So many scenes have revisited me ― the ways in which the usually innocent mien of actor Topher Grace twisted into the malevolence of David Duke; the tense interrogation of an officer who must lie, again and again, that he is not a Jew.

In particular, the conclusion of the film ― its most shattering moment, in which Spike Lee drove home the continued relevance of the anti-racist struggle ― is what returns to me now. That final scene flashes forward to Charlottesville, Virginia, on Aug. 12, 2017 ― a moment of national horror, when James Alex Fields Jr. plowed his car deliberately into a crowd of counterprotesters, injuring dozens and killing Heather Heyer.

Earlier this month, after a jury trial followed by racists and their enemies alike, Fields was sentenced to life in prison, plus 419 years. In America, justice is more often than not infected with our nation’s original disease. But there are moments ― rarer than they should be ― in which it is truly just. The horror at the end of “BlacKkKlansman” cannot be deflected. But the struggle continues, outside the systems of law enforcement and within them as well.

Captain Marvel will be the first Marvel film launching next year, and we already have a couple of trailers for the movie that will introduce a new key member of the Avengers team, a character who is expected to play a huge role in Avengers: Endgame. But while we’ve known for quite a while that Brie Larson plays Carol Danvers/Captain Marvel in the film, we had no idea what Jude Law’s role […]