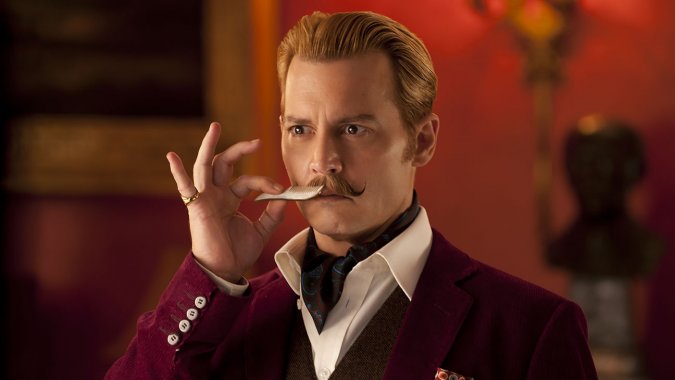 Johnny Depp’s newest film, Mortdecai, is bombing at the North American box office, where it may have trouble hitting $7 million for the weekend.

The $60 million film is even losing to The Boy Next Door, a psychological thriller starring Jennifer Lopez, which is pacing to debut to $16.5 million, putting it at No. 2 behind goliath American Sniper, now in its second weekend.

From Clint Eastwood, American Sniper could earn as much as $55 million in its second weekend for a domestic total of nearly $200 million. Sniper, from Warner Bros. and Village Roadshow, has galvanized Middle America, as well as benefiting from six Oscar nominations, including best picture and best actor (Bradley Cooper).

Mortdecai marks Depp’s third dud after Transcendence and The Lone Ranger (he does have a small role in box office win Into the Woods, now in theaters), and is one of the worst showings of his career.

Lionsgate and OddLot Entertainment had high hopes for Mortdecai, directed by David Koepp and starring Depp as a debonair art dealer and part-time rogue who races to recover a stolen painting rumored to contain the code to a lost bank account filled with Nazi gold. Gwyneth Paltrow, Ewan McGregor, Olivia Munn, Jeff Goldblum and Paul Bettany also star in the film adaptation of KyrilBonfiglioli’s novel Don’t Paint that Thing at Me.

Rated R, The Boy Next Door looks to be another win for Universal’s deal with Jason Blum’sBlumhouse. Directed by Rob Cohen (The Fast and the Furious), the $4 million film explores what happens when forbidden attraction goes too far.

Also opening this weekend is the George Lucas-produced Strange Magic, an animated family film that may also not open past $7 million, thanks in part to tough competition from Paddington, which looks to place No. 3 in its second weekend with an estimated $12 million.

Patrick Stewart starred with Jennifer Lawrence in "X-Men: Days of Future Past," but merely appearing in the credits with Lawrence isn't enough for the actor. In an EW Facebook chat promoting his new movie "Match," Stewart said that the actress would be his ideal co-star. "I'd like to collaborate with Jennifer Lawrence," he said. "I think she's brilliant, with a great sense of humor, and quite good looking." He also […]