Deadwood producer breaks silence: Here’s what the movie is about 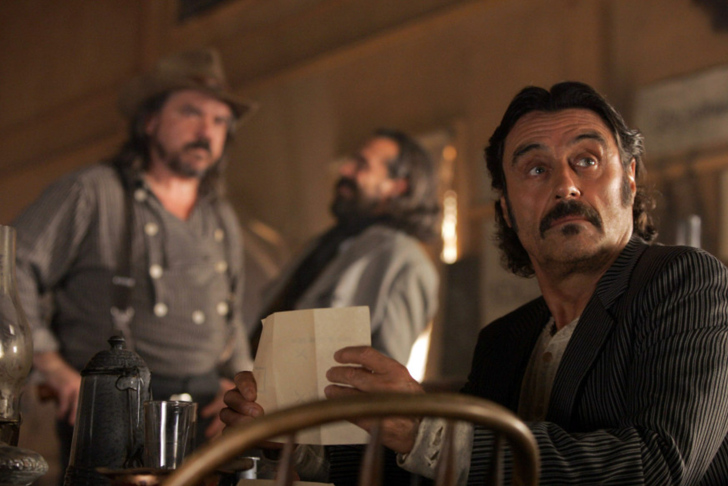 Deadwood fans, your long wait is almost over. Writer David Milch’s acclaimed HBO Western that was canceled on a cliffhanger more than a decade ago will at last return with a movie in 2019 (and sooner than you think — we’re told a premiere is planned for spring). The entire core cast are back, led by Ian McShane as the ruthless bar owner Al Swearengen and Timothy Olyphant as hard-nosed lawman Seth Bullock. The show’s gritty mining town was painstakingly recreated too. Yet nothing in Deadwood has really stayed the same, and those changes, for better and worse, are what film is about.

Below, Carolyn Strauss, a former HBO executive and an executive producer on the Deadwood movie, gives the secretive production’s first interview.

ENTERTAINMENT WEEKLY: What tipped the movie into becoming a reality, because this has discussed for years, off and on, and for so long went nowhere…
CAROLYN STRAUSS: The stars aligned. David had an idea for the script and the will to write it and we managed to get all the actors. I wish I could say it was one thing but there had certainly been an appetite for it at [HBO] for a few years. Me being a glass-half-empty person, I thought, “How is it ever going to work?” And it worked!

Is it fair to say that the network’s announcement of Deadwood movies after the show was canceled in 2006, and then those movies not happening, had been subscribers’ biggest recurring gripe? Was there a sense of wanting to right that?
I certainly know it’s the most consistent question from reporters. I guess probably so? There was a feeling of unfinished business, for sure.

What was your first reaction to the script?
It’s like, “Oh wow, I can’t believe I get to read this stuff again.” Every draft kept getting better. It was hard to believe 16 years had passed since we did the pilot and then being able to read these voices again was such a treat.

You managed to get all the actors back together, which is a miracle given its such a big cast. Timothy made it sound like he might have been the toughest to convince. Who was toughest to pin down on your end?
Tim was pretty tough. I will say he really dug in — in a good way, not a stubborn way — with good thoughts on where to take his character and the story and kept pushing on that, and they were helpful thoughts in terms of getting the script where it needed to be.

The movie is set in 1889 as the town prepares to celebrate South Dakota joining the Union as the 40th state. What’s the film about, basically?
If you ask David, it’s about the passage of time. The toll of time on people. It’s mellowed some people and hardened others. And it’s about the town’s maturing and becoming part of the Union and what that event sets in motion, in a very personal way for the people that it brings in town and what ensues. The toll of time has not just struck Deadwood and the characters but all the people making it as well, you get to see the faces of people 12 years later. And it was really profound. Actors were crying at the table read — not necessarily from the script but the emotion of being back and doing something we all loved doing so much. You normally have a great experience and then it’s over. You don’t normally get the chance to do this in life. It was kind of a gift.

Al Swearengen was of the driver of much of the action in the series, can you give us a sense of what he’s up to?
The time has taken its greatest toll on Swearengen. He’s the person who really drove so much of the life of the town and there’s a sense of that power waning somewhat, and what ensues of that is a big part of the story.

I think one character people were surprised to see back was George Hearst (Gerald McRaney) because he was only introduced in season 3, yet obviously was the major antagonist that year.
What’s true with Hearst is he left a lot of havoc in his wake, and a lot of upset. There was a desire to resolve a lot of that. Plus, as portrayed by Gerald McRaney, he’s a fascinating character, and we all relished the opportunity to see him again.

The movie was filmed on the Westworld sets — or, more accurately, Westworldis filmed on the Deadwood sets. How tough was it recreating the town after all these years?
It was a lot of work. I have to hand it to Maria Caso, who was the production designer. She did a great job originally but then she came into re-creating the town 10 years later and the thought and detail that went into it. There are stone buildings now because there had been a fire, which really happened in Deadwood.

And the movie is looking like it’s about two hours?
I think so.

What if the Deadwood movie is a huge hit from HBO? Is this really the end of the show this time?
Well, I guess, it ain’t over ‘till it’s over. Who knows? We assumed it was over before.

You’re also a producer on Game of Thrones, which is also returning this spring. Have you seen any finished cuts yet? How does the final season look?
The new season is looking fantastic. It’s really kind of staggering in its accomplishment — and we still have a lot of work to do on those as well.

Fans are feeling a bit teased to death with promotional videos that don’t have new footage. Can you give them a rough idea of when a full trailer will drop?
I gotta believe something is going to come out before too long. It’s the season for year-end lists, but one of 2018’s biggest albums is missing from nearly every major publication’s ranking: The soundtrack to Red Dead Redemption 2. Less than two weeks after the blockbuster video game’s release, Rockstar Games was estimated to have shipped 17 million copies to stores around the world. The company declined to provide more updates on the game’s sales numbers, but that initially reported total easily exceeds the […]