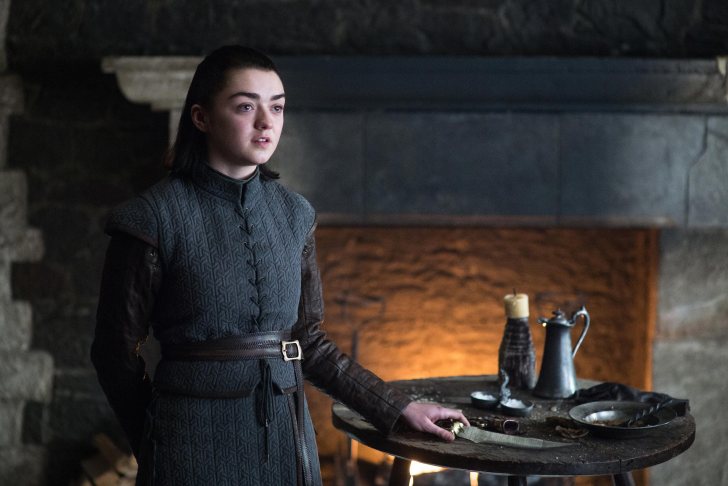 Arya and Sansa’s relationship has entered a dark and dangerous territory. Their reunion warm fuzzies were entirely dispensed in Sunday night’s “Beyond the Wall” as that years-old letter planted by Littlefinger inflamed Arya’s distrust of her older sister, and threatened Sansa’s rule at Winterfell. The maneuver plays into Littlefinger’s long-term plan to nudge Sansa into seizing more power to protect herself and potentially even eliminate the threat of Arya (who’s clearly suspicious of him), and all the while making it seem to Sansa like he’s the only one she can trust. We spoke to stars Sophie Turner (Sansa), Aidan Gillen (Littlefinger), and showrunner Dan Weiss and co-executive producer Bryan Cogman about this perilous turn of events for the Stark family…

Weiss: “They’ve all become very different people. It’s a question when they come back together how they find the commonality that they once shared as siblings — if at all. People move apart they grow apart. This is a fantasy exaggeration of that. Bran has grown farther apart from his siblings than any normal person could ever grow, but is there anything left of him in there? How much of Arya is Arya Stark of Winterfell and how much is the Faceless Men? Sansa has undergone her training, for good or for ill, under Littlefinger’s supervision. So how much of that Machiavellian quality has rubbed off on her? And what does that do? You would think a family reunion among three siblings should be unalloyed joy, and to an extent it is. But there’s a lot of tension and anxiety under the surface because we don’t know how they’re going to relate to each other now that they’re living together under the same roof.”

Cogman: “Sansa and Arya are characters who were never close and never particularly liked each other and have been through so much. Now they have more in common than either are probably willing to recognize. Just because the Starks have reunited doesn’t mean it’s going to be sunshine and roses. It’s a fun gothic storyline with Littlefinger pitting the Starks against each other. The tone is difficult one to strike but the [Sophie Turner and Maisie Williams] are fantastic.”

Turner: “In the books, it says something about how Arya and Sansa are different sides of the same coin. They love each other but they’re so different. They never really got along. And now that they’re back together that’s heightened because they’ve gone down totally different paths and have had to adapt to totally different situations to the point where they don’t see on each other’s level. They don’t really talk about what they’ve gone through. They never really had that communication before, and now when it’s vital to do they don’t have that and can’t understand each other. Arya still sees Sansa as a snooty prissy child that she was before she left for King’s Landing. There’s a big lack of communication. There’s this underlying tension. It’s like a f—ing horror movie.”

Gillen: “Watching my plan come to fruition is quite something. There’s all kinds of mixed things going on with Littlefinger and that relationship with Sansa. So watching her grow in stature is quite enjoyable. With carefully laid plans there’s always a bit of risk involved. He puts himself in a situation that could backfire on him. I think he likes it. His plans are never fail safe. But he puts himself on the line like a good gambler.”

Forbes’ 2017 List of Highest-Paid Actors Revealed: You Won’t Believe How Much Mark Wahlberg Made Over Emma Stone

It's 2017, and men are still making over $40 million more than women in Hollywood. Forbes just announced the 2017 list of highest paid actors, which put Mark Wahlberg at the top, making $68 million due to his roles in Transformers: The Last Knight—which, by the way, was the lowest grossing film of the franchise to date—as well as the forthcoming Daddy's Home 2. Following closely behind Wahlberg, last year's highest-paid actor Dwayne "The Rock" Johnson finished second […]