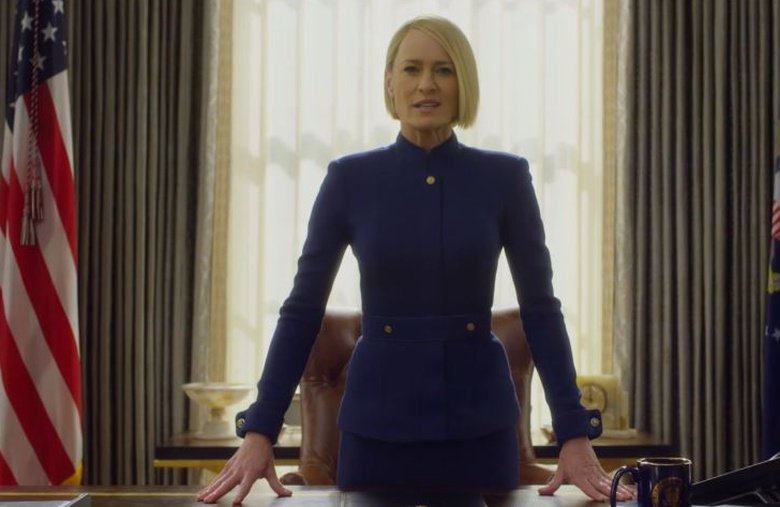 In a post-Frank Underwood world, Claire is in power but the show still looks as if it’s going to suffer from its biggest flaw: the lack of a worthy opponent

Except she doesn’t. Instead, she stands up and says “We’re just getting started”. Welcome to the first trailer for the final, Spacey-less series of House of Cards.

As trailers go, this could not have been more generic if it had just been a close-up of a flag fluttering in the breeze. House of Cards could not have played this any safer if it tried. But, seriously, can you blame it? House of Cards is still incredibly important to Netflix. As its first original series, the show stands as a monument to the company’s cable-challenging intent. It is expensive and prestigious and it drips with talent. Forget the fact that it hasn’t been much cop for years, because House of Cards is still a big deal.

And yet things have never been so precarious. The removal of Kevin Spacey, following a raft of allegations that in all likelihood have sunk his career for ever, has left a void at the centre of House of Cards. Frank Underwood was the show’s dark heart. As he slashed and seduced and murdered his way to power, we were right there with him. He would turn and chat to us during his worst moments. He made us complicit in his wrongdoing. House of Cards was him and us, and everything else was window dressing.

But now some of that window dressing has been turned into a centrepiece. Thanks to a fortunate quirk of narrative – last we saw of her, she was addressing the camera just like her husband – the last series of House of Cards ended with Robin Wright’s Claire Underwood in power. That might mean that she will get to play the lead this time around. But it also means that House of Cards has once again run into its most common problem. She doesn’t have a worthy opponent.

The way the last run was set up, this year’s series was going to be a spectacular bad-blooded showdown between the Underwoods. It was going to be where their thirst for power, which had united them for so long, would finally splinter and destroy them for good. But that won’t be the case any longer, so instead it is likely to be another tedious wet fart of listless, uninvested, one-note political manoeuvring that is happy to spin its wheels for hours at a time until the audience congratulates itself for finally reaching the end. Business as usual. Meet the new boss, same as the old boss.

At least this is definitely the last we will see of House of Cards, though. It will limp to the finish line, exhausted and deformed, and then it will be over for ever. All of which makes Wright’s “We’re just getting started” line feel like an empty threat. Perhaps she should have said “Eight more episodes and then you can rewatch Stranger Things”.

The trailer could have been worse. They could have overdone Wright’s gender. The tagline “Hail to the chief” could have quite easily boiled over and become “Yaaas Queen” or “Please rise for the Bra-Spangled Banner”.

But it could have been better, too. The technology now exists to graft Kevin Spacey’s face onto another actor’s body, so perhaps this trailer should have been a montage of Frank Underwood dying in a number of hilarious ways. He could drive his car off a cliff, say, or get hit in the face by a goose on a rollrcoaster, just like Fabio. He could be shot out of a cannon or crushed by a falling piano. He could slip on a banana skin and trip into a log-chipper. The possibilities are endless. And all of them would have got me excited for House of Cards. As things stand, consider me unmoved.

About a year ago last march, a robot called the Sub1 solved a Rubik’s Cube in 0.637-seconds, earning it the Guinness World Record for being the fastest cube-solving bot. That honor now appears to be in jeopardy, however, as a pair of engineers have demonstrated a new robot that can solve a Rubik’s Cube in almost half that time: a mere 0.38 seconds. https://www.youtube.com/watch?v=nt00QzKuNVY According to the blog that Ben Katz and […]