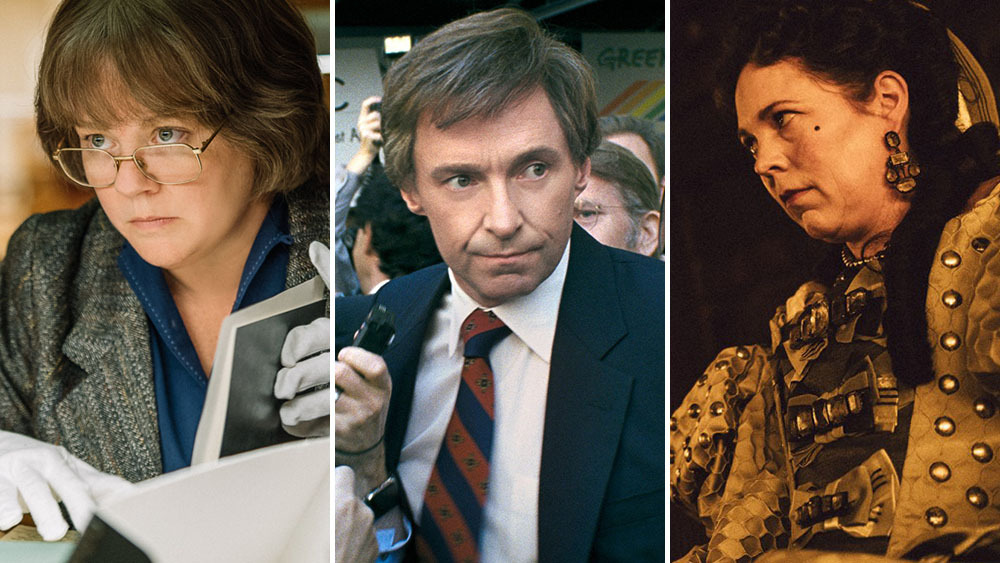 As the 45th annual Telluride Film Festival begins to wind down, the landscape of lead acting Oscar contenders is beginning to materialize in the early days of the film awards season.

On the actress side, Nicole Kidman is turning a lot of heads with her de-glammed performance in Karyn Kusama’s uneven noir “Destroyer.” The film has been a bit divisive, but most agree that the 51-year-old Oscar winner delivers in a role completely unlike anything she’s ever tackled. It’s a true antiheroine, though, a character that could put some viewers off. But it’s thrilling to see Kidman go to such a bold and dangerous place at this stage in her career.

Fox Searchlight has at least a pair of possibilities, maybe a third if the reigning best-picture champ opts to widen the net for “The Favourite.” Yorgos Lanthimos’ outrageous period-piece comedy has critics going gaga (though that could fade somewhat if it becomes a love-it/hate-it film in the season). The performances from Olivia Colman, Emma Stone (receiving a tribute here at the fest) and Rachel Weisz are outstanding, but at the moment it appears Colman’s uproarious depiction of Queen Anne is the leading contender. She’s been rather universally declared the stand-out, but like her two co-stars, it’s a role that could be perceived as supporting.

If either of the other two ladies gets the upgrade, it would be Stone as Abigail Masham, one of the queen’s intimate companions. The 29-year-old knows how to grab the spotlight when she’s on camera, and indeed, that’s what the film is about in some ways. Searchlight is leaving things open for the moment to see how these performances continue to land with audiences at the festivals, but if I were to wager an early bet, I’d look for Colman to take center stage.

Also from Searchlight is “Can You Ever Forgive Me?,” with Melissa McCarthy as author Lee Israel. Israel, who was struggling for work in the early ‘90s, found herself the most unlikely of criminals when she launched a campaign of forging (and stealing) intimate letters from famed writers like Dorothy Parker and Lillian Hellman, then selling them at top dollar. Marielle Heller has made a charming film that expertly balances drama and comedy, and McCarthy delivers her best performance to date as the scorned and conflicted Israel. (Watch for Richard E. Grant in the supporting actor race as a rowdy friend and confidante.)

Also worth mentioning is a pair of performances in foreign-film players: first-timer Yalitza Aparicio in Alfonso Cuarón’s “Roma” and Joanna Kulig in Pawel Pawlikowski’s “Cold War.”

In the lead actor arena, Robert Redford highlights an assortment of star players. His swan-song work in David Lowery’s “The Old Man & the Gun” could contend if that into-the-sunset narrative really takes hold. It’s not that the performance really stands-out in his filmography — after all, it’s built on the charm and charisma of so many of his other turns throughout the years — but it taps the nostalgia beautifully, and moreover, his chemistry with Sissy Spacek is too delightful to resist.

In Damien Chazelle’s “First Man,” Ryan Gosling tackles the role of astronaut Neil Armstrong with a kind of stoic ease. It’s a bit more passive than the stuff that usually pops for Academy voters, but it’s no less compelling. There are no “Oscar clip” moments, but so much drive and grief and pain is happening beneath the surface. Co-star Claire Foy brings the electricity, though, and could be a better bet in supporting actress.

Finally, director Jason Reitman wrangles with a number of zeitgeist-y themes in “The Front Runner,” about politician Gary Hart’s failed campaign for the Democratic presidential nomination of 1988. Hugh Jackman nails the role and all its naïveté as Hart struggles under the spotlight of a press obsessed with his private dalliances.

Other performances of note include Victor Polster in Lukas Dhont’s transgender portrait “Girl,” Lukas Hedges in Joel Edgerton’s gay conversion therapy drama “Boy Erased” and even the late John Huston in Orson Welles’ finally-completed “The Other Side of the Wind,” among others.

These and more join a snowballing competition that will continue to roll through the fall. Who will last year’s victors Gary Oldman and Frances McDormand end up presenting Oscars in roughly six months? Time will tell.

U2's show last night in Berlin, Germany came to an abrupt end in the middle of their set when frontman Bono suffered a sudden "complete loss of voice." While an official cause of his voice-loss has yet to be revealed, Ultimate Classic Rock points out that Bono had commented on the fact that smoking was allowed in some parts of the venue they were in and he was feeling the effects. "This […]