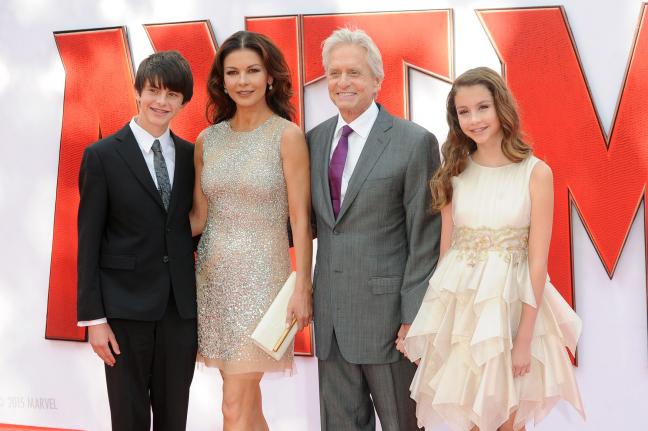 Stars Paul Rudd, Michael Douglas and Catherine Zeta-Jones, among others, attended the European premier of Ant-Man at the Odeon Leicester Square theater in London Wednesday night.

Rudd, 46, plays the film’s smaller-than-life superhero and donned a memorable white-tie paired with a gray suit to the event. Co-star Douglas, who plays Ant-Man’s mentor, showed off his stunning family.

The 70-year-old actor and his kin dressed to the nines for the glamorous event. Welsh actress Catherine Zeta-Jones walked the red carpet alongside her husband of 15 years and two children, Dylan, 15, and Carys, 12. She and Carys wore similarly-hued dresses while posing for photos along the way.

The family of four held hands as they stood in front of photographers before entering the premier. The event occurs just days after Douglas announced the death of his mother, Diana Douglas Webster. “She died peacefully of cancer after having been a patient in palliative care since early June,” Douglas wrote on his Facebook pageSunday. “I will love and miss her forever.”

The stars & director of Marvel’s #AntMan hit the red carpet for their London premiere! http://t.co/ZokzgELv1kpic.twitter.com/vEKDT1s7QU