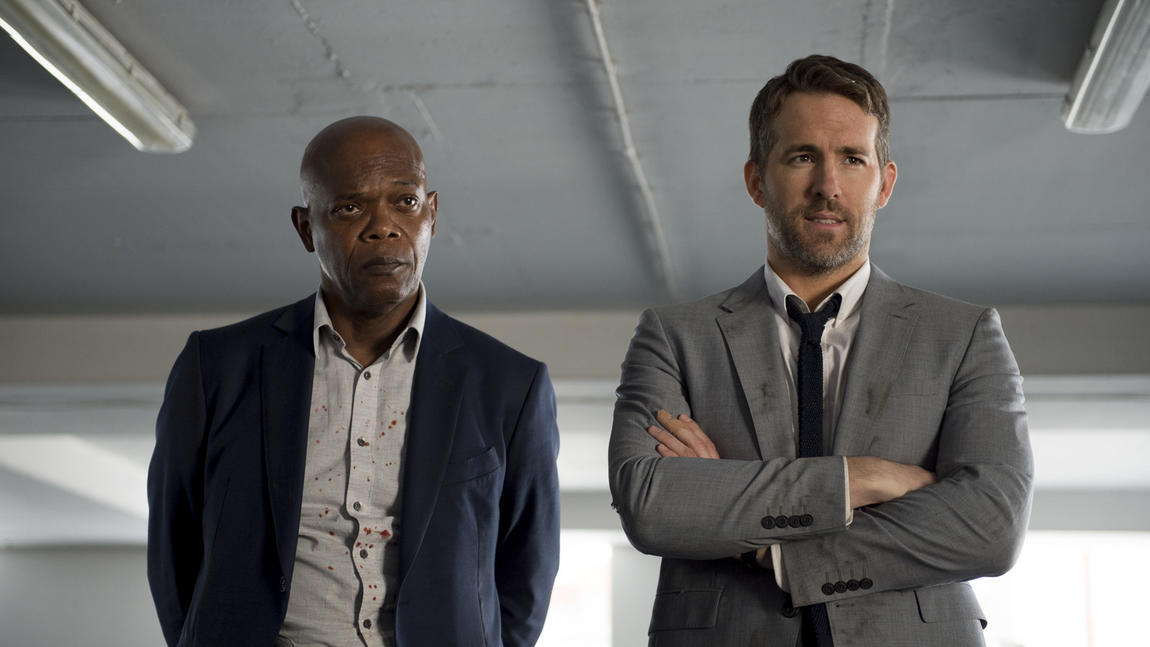 After stumbling out of “The Hitman’s Bodyguard,” an insanely violent live-action cartoon starring Samuel L. Jackson and Ryan Reynolds, I found myself asking the kind of question the critic is occasionally forced to ponder after too many years steeped in Hollywood movies. No, not, “Why didn’t I take off the month of August?”or “Why don’t fights like that ever break out at my local hardware store?” A question of a more technical nature: Is it “hitman” or “hit man”?

Lionsgate’s posters declare the former; the all-knowing Associated Press Stylebook, alas, dictates the latter. This is hardly the first time the decision makers of Hollywood and the copy editors of America have had to agree to disagree, as my memories of the epic hyphenation battles over “The 40-Year-Old Virgin” attest. In the case of “The Hitman’s Bodyguard,” the studio’s preferred one-word spelling may actually be the appropriate one, given the hectic, dizzying speed of the movie in question. Space? It doesn’t have time for a space; it barely slows down for punctuation.

The hit — er, the assassin is Darius Kincaid, played by Jackson with his usual diabolical grin and his unrivaled comic mastery of everyone’s favorite 12-letter expletive. Held in a Manchester, England, prison, he agrees to testify against a genocidal Belarusian dictator named Vladislav Dukhovich (Gary Oldman, chewing the scenery as if it were a nice stuffed bulbianiki) in exchange for the release of his also-incarcerated wife (Salma Hayek, having more fun than the rest of us). And so begins a race to get Kincaid from Manchester to The Hague, a journey all but paved with nasty Dukhovich henchmen bent on taking him out before he can reach the witness stand.

After a brutal street ambush that leaves several Interpol operatives dead and the camera lens splattered with blood, one surviving agent, Amelia (Élodie Yung, fine in a thankless role), decides the only one who can get Kincaid to safety is her estranged ex-boyfriend. That would be the bodyguard, Michael Bryce (Reynolds), who was once a top-of-the-line, Triple A-rated protection agent before he lost a high-profile Japanese customer (briefly played by Tsuwayaki Saotome) by the name of Kurosawa, which I guess makes Bryce his yojimbo.

Stuck in a downward spiral ever since, Bryce has a shot at career redemption if he can complete this “Midnight Run”-style mission, which he reluctantly accepts after he and Kincaid have made some obligatory attempts to destroy each other (acrimonious job history and all that). On paper, the talent match-up would seem inspired: Even before his career-making work in “Deadpool,” Reynolds was always a dab hand with a one-liner, the rare leading man with an insult comic’s sensibility. And Jackson is, well, Jackson. Give the two of them some guns and shove ’em in a soon-to-be-totaled car, and the brawling and bickering should more or less write itself.

Not quite, alas. Uncertain whether to be a cheerfully weightless killing spree, an earnest odd-couple comedy or, most hilariously, a straight-faced Eastern European political thriller, Tom O’Connor’s screenplay falls back on shopworn snark and half-baked bromantic attitudes. If it would shock you to hear that the merry contract killer teaches the uptight bodyguard a thing or two about how to chill out and get his woman back, by all means proceed to the nearest multiplex. The rest of you may wish to avoid the painful spectacle of two gifted comic actors looking far more stranded than they should — sometimes getting by on their well-practiced shtick, but other times flailing to conjure hilarity out of nothing.

Australian director Patrick Hughes previously made the third and worst movie in “The Expendables” franchise, though in that case he was hamstrung by a self-defeating PG-13 rating. Liberated here by a well-earned R, he stages a few clunky but serviceable action scenes, the best of which is a high-speed chase involving a runaway boat, an airborne motorcycle and lots and lots of weaponized cars. Elsewhere the director wipes out an outdoor market and blows up a public building, in scenes that probably would have been a bit (but only a bit) less troubling to watch a week ago.

Lighten up, you may say. But even those who try to lose themselves in the meager, mindless thrills of “The Hitman’s Bodyguard” may be distracted, if not by the looming specter of current events, then at least by the movie’s technical shoddiness. Scene after scene is marked by a glaring discontinuity between background and foreground, and there’s one helicopter explosion that has a visual quality I don’t have the word for at the moment, though I will once I’ve consulted the stylebook. Should “craptastic” be hyphenated? iOS 11 Has a Slick Privacy Feature All Phones Need

All the Apple hype is building toward the release of a new, expensive, redesigned iPhone this fall, but that's far from the only thing Apple is putting out. The latest version of the iPhone's operating system—iOS 11—is also on the horizon, and currently in beta testing. Those who have been messing around with that beta have uncovered a new, upcoming feature that will make iPhones everywhere safer and more secure: the […]