To the surprise of no one, Adele’s return “broke the Internet.” In just five days, the video for the British soul singer’s comeback hit “Hello” is the second quickest to reach 100 million views on YouTube.

But with great success also comes major spoofing. No need for four bars with your service provider to LOL at these parodies and e-reactions to Adele, her flip phone and that emotional “Hello” video.

Ellen DeGeneres spoofed Adele’s new single from the comfort of her own home. “Adele and I are good friends and a lot of people don’t realize ‘Hello’ is based on a conversation that we had,” she joked on The Ellen Show before presenting the parody, where she is seemingly trapped on a call with the Grammy-winning singer.

Late Late Show ringleader, James Corden, slipped on his best Chewbacca costume for a Halloween mini-movie set to “Hello.” A cow suit-wearing Billy Eichner also jumps in on the fun (or rather, feels) when a lonely Halloween triggers happy memories of the Star Wars duo trick-or-treating. Bonus points for their vocal range.

The 1996 shriek fest that was Scream gets Adele-ified when a young Drew Barrymore picks up a call from the U.K. soulstress in this cinematic parody of “Hello.”

Before Adele’s “Hello,” there was Lionel Richie’s oft memed single of the same name. The video for the 1983 Grammy-nominated slow jam meets its present-day counterpart in this spoof where both vocalists get their wires crossed. Even Richie co-signed this version on his Instagram.

In another corner of the Twittersphere, pop star Katy Perry wasn’t afraid to flaunt her tears after listening to Adele’s latest.

This look @adele actually made me scream like a little girl

Fellow U.K. sensation, Sam Smith, even let out a scream after seeing Adele’s flawless face peer into his soul via the “Hello” video.

The Internet responded accordingly to Adele’s new single with an onslaught of Twitter jokes. Here’s one poking fun at chart-topping sweetheart Taylor Swift making an imaginary call to the “Hello” singer.

Only response that will be accepted for this meme is “same.”

Further proof that @Adele can do whatever she wants…SHE’S BRINGING BACK THE FLIP PHONE pic.twitter.com/tlaBFzbHXx

Adele’s video wasn’t the only thing that shocked the world. Her resurrection of the flip phone turned heads, too. It wouldn’t be right wrapping an Adele list without an honorable mention for the Auburn University PR student named Mary Caldarella, who slid into her ex’s inbox with “Hello” lyrics at the ready. While it didn’t go over well with her old beau (“He definitely wasn’t happy about [the tweet],” she told Cosmopolitan), this poetic way of hitting up a former flame could do wonders for others. 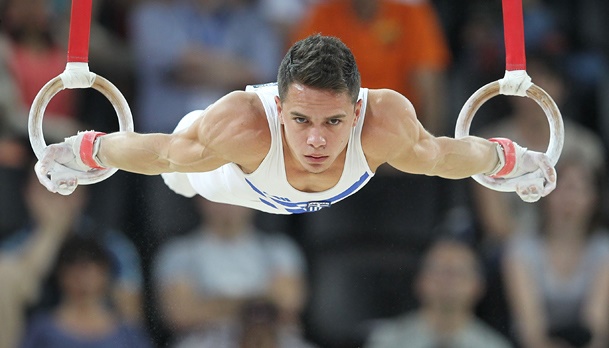 The Greek athlete who qualified as first had an excellent appearance and with 15,800 points became world champion while winning the ticket to the Olympics in Rio. Petrounias continued his amazing run of gold medals after having conquered the first place in both the European of Montpellier and the European games held in Baku. The final rankings: Lefteris Petrounias (Greece) 15,800 Hao Yu (China) 15.733 Hang Liu (China) 15,700 Samir […]