Call of Duty: WWII — Sledgehammer Games’ best tips for getting good at multiplayer 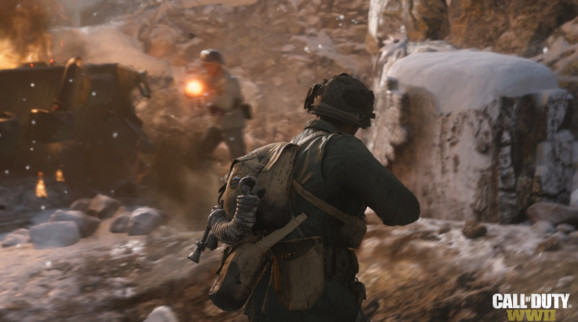 Death is inevitable in Call of Duty multiplayer. But you can always find ways to survive longer in a multiplayer round, and we caught up with the creators of Call of Duty: WWII to glean those tips for this year’s return to boots-on-the-ground combat.

The gameplay this year is far different from last year’s Call of Duty: Infinite Warfare, where you could double-jump into the air and shoot down on unsuspecting noobs (new players). You move at a more deliberate pace through terrain with a lot of cover, and you have to use the right weapon at the right time. So far, with a couple of days of multiplayer combat behind me, I’m happy to report that I have a better kill-death ratio in multiplayer than I did with Infinite Warfare.

(Here’s our other coverage of Call of Duty: WWII).

I attended a review event for Call of Duty and interviewed Michael Condrey, studio head and cofounder of developer Sledgehammer Games, and senior producer Mike Mejia. They gave me some good advice for navigating through the Headquarters social hub as well as staying alive longer in multiplayer.

The game has new modes like War, where you have to team up with your friends and accomplish a multi-part mission such as building a bridge and escorting a tank to destroy antiaircraft guns. It also has a unique Divisions system that segments players into different kinds of roles and weapons.

The game comes out on November 3 on the PlayStation 4, Xbox One, and PC. You can read our tips for survival in the edited transcript of our interview. 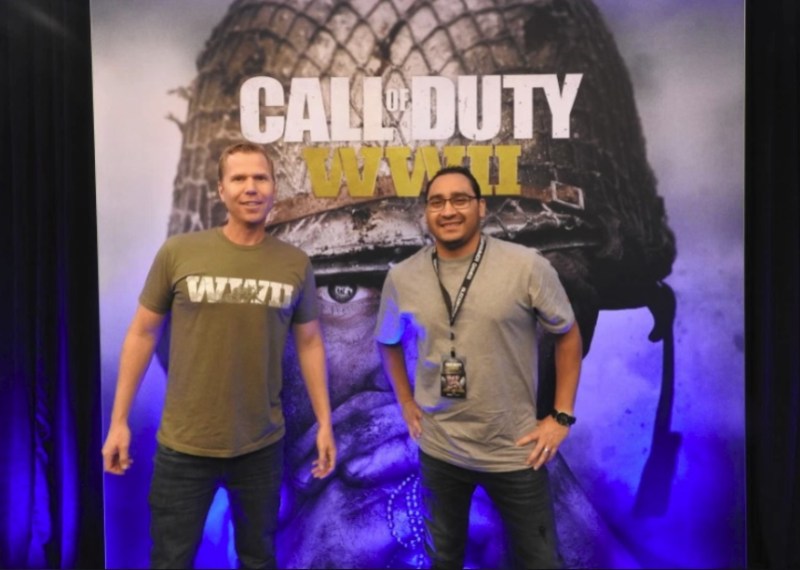 GamesBeat: If you’re trying to figure out a role to play in multiplayer, what decisions do you make that will be in alignment with that role? For me, I’m not too fast or accurate. In that past that means I get a light machinegun and try to camp out playing fire support. Here, what sort of choices do you want to start making?

Mike Mejia: Everything starts with your division, enlisting in that division. That’s the core choice you have to make. Once you make that choice, based on the gameplay style you want to go into battle with, you start to look at your class and your loadout. If you’re an armored guy, when you’re making your choices in weaponry, you want to make sure that aligns with your division so you can get the most out of that weapon.

GamesBeat: That’s something that past players aren’t as familiar with, right? That a division is associated with a specialty.

Mejia: It’s a brand new feature. It redefines the create-a-class system for Call of Duty. Division drives your choice in how you want to play, and how that ties to your weapon.

Michael Condrey: Divisions are meant to encourage a particular type of role, more powerfully than in any create-a-class in the past. You can consider the flexibility you want in determining your soldier’s loadout with a play style. Each division is set up to have a role. You sound like an armored guy. In this case, armored is set up with an LMG. He’s a hold and suppress sort of role-player. His skill is built around taking less damage. It’s perfect for objective players.

GamesBeat: I didn’t realize I could use a light machine gun in the infantry, but then I didn’t have access to the stand I could use in armored.

GamesBeat: Are you slower than you would be in infantry?

Condrey: You are, because you’re more armored and you’re carrying a heavier weapon. You contrast that to airborne, which is all about speed and stealth with the suppressor and increased sprint speed. That’s a great role player for people who are trying to get to the front lines fast.

Mejia: As you progress through your career in multiplayer, you start to make choices and build out for your division. Let’s say I really like LMGs, but I want to run a little faster and climb obstacles faster. I’ll take airborne division, but then take my LMG. I have to make that trade now. I won’t be able to use my bipod to get less recoil in that powerful stance. You start to make those tradeoffs. You want to use your division and the weapon that’s tailored to it so you can get the most out of your division. 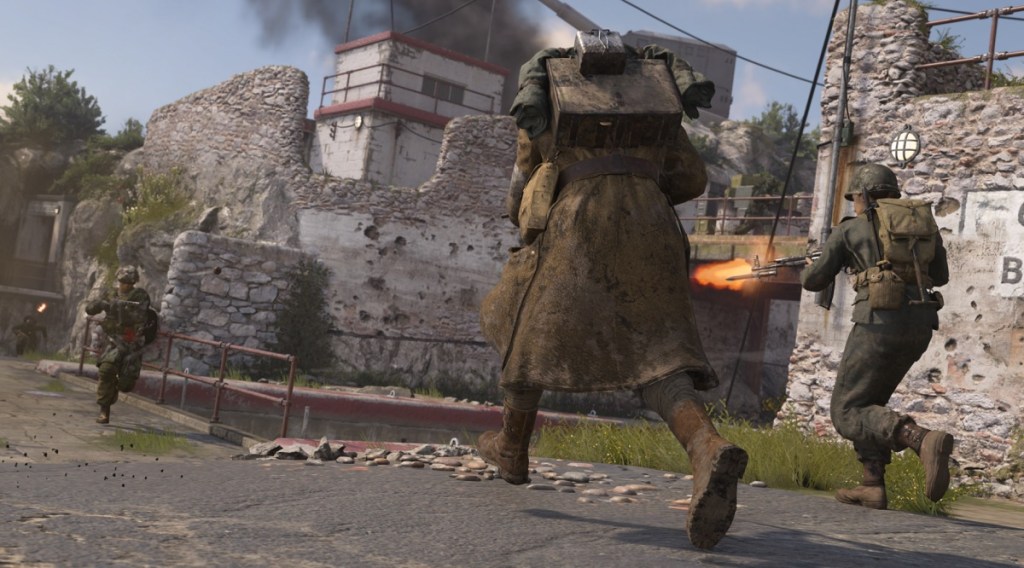 Above: The Sledgehammer team visited Gibraltar to get the layout right.

GamesBeat: And you can make other decisions. If you want access to smoke, you have to trade something for that.

Mejia: Yeah. You through the basic training and as you rank up, you’ll get a lot of options. I believe the one we’re talking about now is Bang, which allows you to take smoke and lethal at the same time. Then, when you go down here, you’ll have both of those. You trade that for something you might like. Score streaks don’t reset. I usually run this class because it’s hard to get some of those score streaks. But again, it’s a tradeoff depending on how you’re going to play in that session. It’s all there for you to try new things and see what feels right for you.

Condrey: For us, the thought was to make the choices meaningful. Two meaningful choices: what’s your division, and what’s your basic training? In Advanced Warfare we had pick 13. Lots of choices. Sometimes those choices felt less intuitive than we wanted for a particular type of role. In this, you pick your division, your primary choice, and marry that to your basic training, your secondary choice. Those two choices define your play style.

If you’re a gun guy you pick infantry. That gives you three attachments on your gun. And you may take Primed as your basic training to give you a fourth. That means you’re all about your weapon. It’s the only division that can have four attachments. You’re definitely tip of the spear, if you will. If you’re about running silencer and moving fast, you’ll go airborne and marry that with a movement basic training.

Given that we’re talking about multiplayer in all the modes, you’ll want to set up each one of your divisions, because as you saw, you want to switch between them for different parts—you don’t want to run mountain division for all of Operation Breakout. There are points on the bridge defend where you’ll want to switch to something that’s more movement-based. Also, map and mode combinations—we talk about leveling up all your divisions because airborne is not particularly good on Cannon, a big open map. Mountain division, with the sniper rifle, is not very effective on Flak, a smaller map.

Each one of these is meant to define a type of role. Expeditionary force, great for firepower and close quarters combat, great for Pointe du Hoc in the trenches.

GamesBeat: You can use the shotgun in other areas, but expeditionary is where….

Mejia: –you get the incendiary shells, exactly. Same thing with the mountain division. 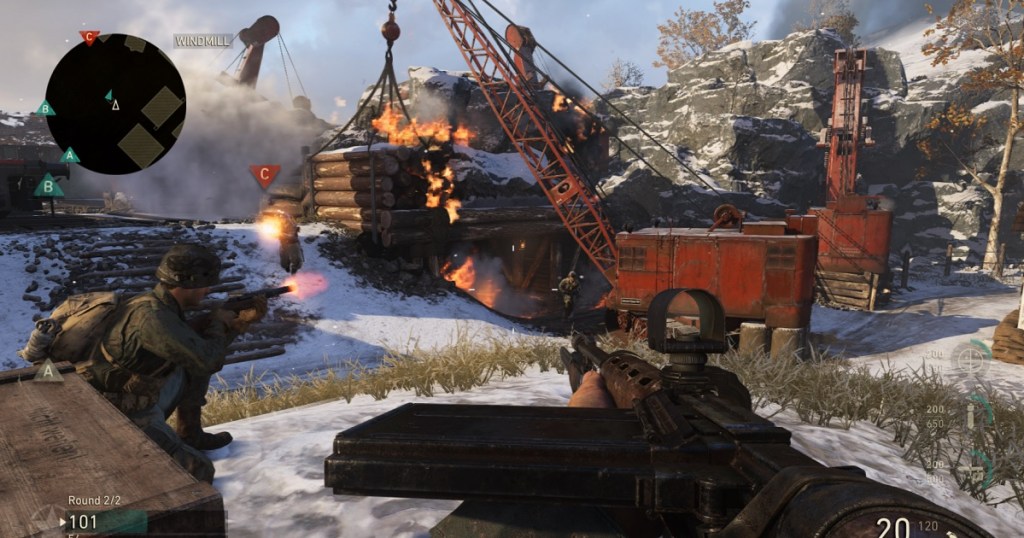 Above: Multiplayer battle in Call of Duty: WWII.

GamesBeat: That seems very popular. I’ve seen in the incendiaries in every match so far.

Mejia: That’s a tradeoff too, because you’ll have only eight shells. Then you have to reload. Okay, I know I’m going to have a pretty good run with eight shells, but then I have to find a spot to reload and go back out. You’re always making choices to make sure that when you go into battle, your play style is defined. I was showing you the infantry yesterday. If you want to take the StG 44 you’ll get the bayonet. But if you take the StG 44 and you’re the airborne division, you won’t have it.

GamesBeat: In an ideal match, do you see one of every kind of player on a team?

Condrey: I don’t think we’re in a place where it has to be one of each division. What we do know is that you can’t have everybody running one division. It needs to be a mix. Especially in War mode, but even in your standard game modes. That mix of role players is super important to the success of your team.

GamesBeat: Would you go as far as to say certain maps were designed with a particular division in mind?

Condrey: Absolutely. Divisions, for us, reinforce a particular play style. We want to encourage people to explore and have fun in different levels. We know that fans who try more of the game have more fun with the game. Longer sight line maps, more open maps — Aachen has some great engagements that are built around snipers, the mountain division, as does Cannon. Maps like the USS Texas and Gibraltar are all-purpose maps. And then some of our smaller maps — London, Flak — are meant to be fast-paced, shotguns, SMGs.

Mejia: Expeditionary and airborne are really good there.

Condrey: The hope would be that as you’re playing and enjoying leveling up and getting rewards and unlocking new ways to play, you’ll tailor your play style to the map, mode, and objective you’re playing. That’s more meaningful than what we had in Advanced Warfare. Because you had ultimate customization in Advanced Warfare, you really built your soldier once and then stuck with it. If you level up all of your divisions, prestige all your divisions, you can imagine maybe there are some rewards for doing that. 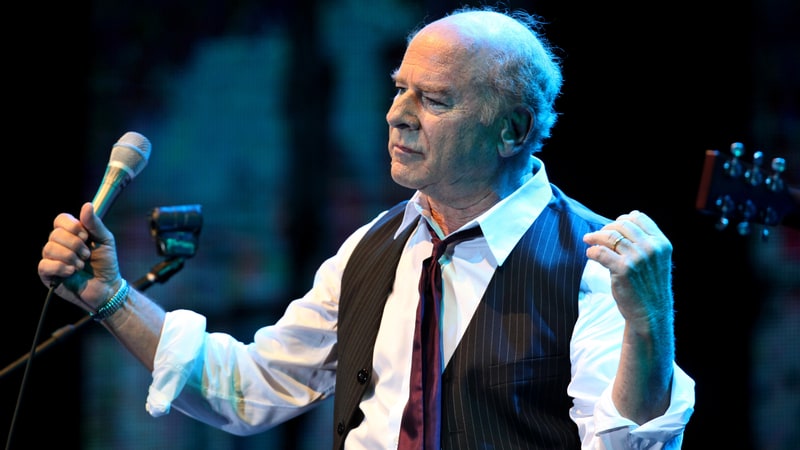 Art Garfunkel on His Unusual New Book, the End of Simon and Garfunkel

In the spring of 1983, Art Garfunkel stepped out of his New York apartment building and began a walk across North America. The journey was conducted across 40 installments (always picking up exactly where the last one ended) and took him 14 years to complete. The whole time, he had a small notepad and pen in his back pocket. "I'd stay at two-star inns during the night," he says. "And when inspiration […]