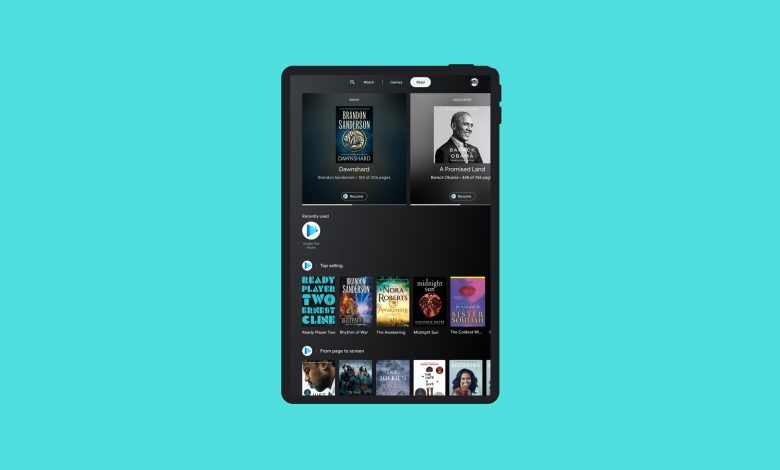 A surge in interest for large-screen slates has prompted the company to inject an “Entertainment Space” into the user interface.

In what’s possibly the biggest change to the Android tablet experience since 2011, Google’s new Entertainment Space is an easily browsable content menu accessible directly from the home screen; just swipe to the right to bring it up. The multi-tiered widget contains recommendations for movies, books, and games from all of your installed apps. It also suggests other media you can buy, stream, or download based on your preferences.

The big caveat? Entertainment Space is only available on upcoming and select existing tablets from Walmart’s Onn brand starting this month, with Lenovo and Sharp devices next in line to get the feature later this year. It’s not coming to all Android tablets yet, though Google says it will eventually show up on hardware from other brands.

A part of the reason for that staggered rollout is due to how Entertainment Space is bundled into the operating system. It’s integrated into the home screen launcher, and since tablet manufacturers set how the launcher on its device behaves and what it looks like, it’s tougher to make broad changes.

James Bender, product manager at Google Play, says this approach helps Google’s hardware partners offer a more enticing package to consumers. “You bundle Entertainment Space with Kids Space and you have a single device you can buy that solves the entertainment problem and the kids problem,” he says.

If you pick up your Android tablet today and swipe to the right from the home screen, you’ll see the Discover feed, a selection of news stories related to your interests. When Entertainment Space is added to supported tablets, it will replace the Discover feed. (The Discover feed hasn’t been axed; just tap the Google icon on the search bar and it’ll take you straight to it.) In this new hub, you’ll see an interface that resembles the one from the company’s recent Chromecast With Google TV streaming dongle.

Three tabs sit at the top: Watch, Games, and Read. All the media recommended here is based on what’s installed on your device, so if you’re a Netflix subscriber, you’ll see movie or TV shows from Netflix without needing to jump into the app. If you’re reading (or listening to) a book via Google Play Books or a third-party bookstore, you can pick up where you left off from the Read tab without hunting for an app. Podcasts don’t have a home here just yet, but Google says it’s in the works.

If you have Google’s new streaming dongle, you can seamlessly continue watching a movie or show on the tablet after pressing pause on the TV—handy if you’re moving from the living room to bed—though this might not work with all streaming apps. Entertainment Space does lean into short-form content more heavily though, including YouTube shorts and Twitch streams.

Of course, Google also presents content it thinks you’ll enjoy based on your viewing history, likes, and other data. You can even install any apps or games that are recommended here without needing to jump to the Google Play Store first. And if multiple people in a household are sharing a tablet, you can switch between profiles in Entertainment Space so each user can enjoy a personalized experience.

“Entertainment Space is meant to be a discovery pane where you can find all the things you were previously watching, reading, or playing, and get back into them or find new items,” Bender says. “It’s not meant to be a consumption area. If you click on any card, it takes you to the respective app. What we want to do is make it easier for people to get to the content they want to enjoy.”

Google says it conducted 23 studies on more than 17,500 Android tablet owners around the world, and it discovered that one of the biggest pain points for its users was finding content across multiple apps. Entertainment Space, which took two years to develop, aims to reduce the number of clicks required to get to your media. The feature is arriving at an opportune time too. Google says throughout 2020, it saw a more than 30 percent jump in Android tablet usage over 2019.

“Because of Covid, tablet usage has skyrocketed,” Bender says. “We’ve seen the number of monthly active users increase, and last quarter was literally the best ever for tablet activations and sales. It’s fair to say that that’s directly related to a lot of the screen time increase in work-from-home and shelter-in-place, but also from improvements to the ecosystem like Google Kids Space.”

Apple is still the leader in tablet market share, but in the first quarter of 2021, Samsung’s tablet sales saw a 60 percent growth over the same time last year, and Lenovo grew by 134 percent, according to data from technology research firm Canalys.

“The tablet market is growing tremendously; it has for a few quarters here,” says Brian Lynch, research analyst at Canalys. “It’s been pretty well paralleled to all operating systems in the market. In general, Android and iPad operating systems have been doing well and growing at similar rates, and all vendors have been quite successful for Android.”

Lynch says he expects this growth to continue for a few years before eventually tapering off. He also confirms Bender’s suggestion that the growth kick-started in 2020 when the world went into lockdown over the Covid-19 pandemic. Education was a big driver as students needed access to a screen for at-home schooling.

“Let’s say you’re a parent with three kids at home,” he says. “They have class, they can’t go outside, and so getting a tablet is really helpful for general productivity. You also have to look at some of the chip shortages from the past year; tablets have been able to weather that storm a little bit better than notebooks, so there’s likely some crossover there.”

The Android tablet experience hasn’t seen many big changes over the years as Apple dominated the market with regular feature updates and a consistent stream of new hardware. Entertainment Space may give the Android tablet experience a big shot in the arm. However, it doesn’t solve the problem of how so few Android apps are optimized for the larger screen. Bender says that’s starting to change.

“Tablets are kind of the least expensive way to get an incremental screen into your home,” he says. “What we’re seeing is a bunch of OEMs that are increasing their forecasting in a dramatic way, and they’re selling through their existing stock. What that does is, you get more monthly actives, and that’s what developers need. They need the increased number of users to incentivize them to make changes to their tablet plans, and we’re seeing that across the board.”

Bender says we can expect more tablet-specific updates in the future, teasing that Google is cooking up “dramatic improvements.”

“We’re always working on all form factors to make them better,” he says.

https://ew.com/movies/disney-parks-real-life-lightsaber-video/ Cue the "take my money" memes because Disney has unveiled something they've been working on for a while: a real-life, working lightsaber. As part of the many reveals on May 4, a.k.a. May the 4th (Be With You), a.k.a. Star Wars Day, Disney Parks released the first video of this beauty in action. The saber will be part of Star Wars: Galactic Starcruiser, a new Star Wars attraction coming to Disney World in 2022 […]