The ‘Game Of Thrones’ Creators Teases A Shocking Ending 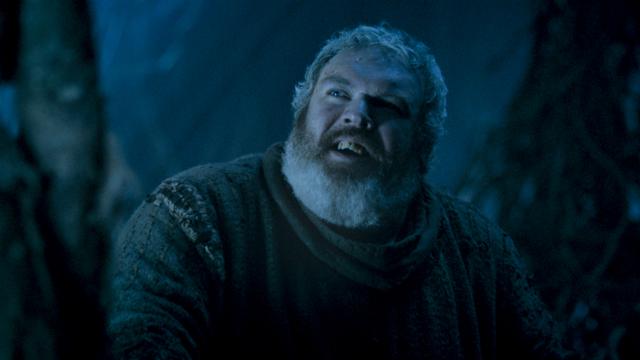 Game Of Thrones is full of surprises, but, in an interview with Entertainment Weekly the creators of the HBO show teased the ultimate shocker. David Benioff and Dan Weiss told the magazine that two years ago, author George R.R. Martin revealed three Game of Thrones twists in the source material that would lead to the end of the Fire And Ice saga. These twists are so shocking the GOT guys have nicknamed them the “three holy sh*t moments.” The first, was Stannis Baratheon sacrificing his daughter Shireen in the fifth season. The second, was the recent big reveal of how Hodor became Hodor,which has forever changed how we think of the phrase “hold the door.” But the third moment is by far going to be the craziest because it’s “from the very end,” as Benioff teased.

Of course, no one is going to give away the ending, but it does have us wondering what could be the most shocking thing that could happen in the final season or episode of a show that always keeps fans on their toes. That’s why this list is ranking the crazy to the downright insane ways Game Of Thrones could possibly end. Yes, some of them will concern the throne and who will sit on it, while others will not. If we’re to believe Benioff and Weiss, it seems the crazier the theory, perhaps the more likely it is to come true. So, definitely be more than willing to suspend your disbelief and accept that the end of Game Of Thrones may just be downright insane.

You know you’ve been waiting to see the dragons unleash their fury on the White Walkers and this could be the way. It’s the battle that we’ve all been waiting for and undoubtedly will happen, but, in this theory, we finally get to know who rides alongside Daenerys to save the world. Daenerys’s dead brother Rhaegar already hinted that “the dragon has three heads,” which fans believe mean each of Dany’s dragons will have a rider. As Vanity Fair pointed out, many fans have guessed Jon Snow will be riding a dragon right next to her thanks to the R+L=J theory, which assumes that Snow is actually a secret Targaryen. But for the third rider, many believe it will be Tyrion Lannister, who may also be a secret Targaryen.

8. Tyrion Sits On The Iron Throne

As we’ve seen in this most recent season, Tyrion knows how to play the game, maybe better than anyone. He understands to rule, you have to be able to compromise. He’s also gotten much more confident in his back room dealing, as we’ve seen in Mereen. While he may not be able to overthrow anyone, what this may show is that he’s the one who could eventually bring the kingdoms together once and for all through bureaucracy.

This is definitely not the most happiest of endings, but some wonder if none of our heroes make it to the end. Instead, the world needs to start over, perhaps without humans. Yeah… I told you this wasn’t a positive ending.

This isn’t that surprising, mainly because it’s been something that’s been hinted throughout the show. But, who Azor Ahai is reborn as could make this realization very shocking. Stannis Baratheon was originally hinted to be the chosen one, but his death seems to make that unlikely. Daenerys Targaryen and Jon Snow have also been listed as possibilities, but what if Azor Ahai is someone we never could have imagine?

As Paste pointed out, after this most recent episode, it seems Bran is a time traveler who may have had a larger hand in the architecture, both literally and physically, on Game Of Thrones, which means theories are now pouring in that have Bran being the chosen one. Not just now, but always. His ability to travel throughout time and actually influence the past may mean he’s the Bran the Builder that is written about in the history books. He is the one who built the wall. Possibly, Bran’s the one who made the Mad King go mad. Even more crazy, he may be Azor Ahai. If Bran has all this power, he may be the only one in the end that can save the seven kingdoms — not with a sword, but with his mind.

Many fans would like to see Jon Snow and Daenerys rule Westeros together, but what if they’re actually enemies? This theory has the two duking it out for the Iron Throne in a battle of Ice and Fire. In this scenario, Daenerys has gone crazy just as the Mad King did, and, with her dragons in tow, she actually wants to destroy the Seven Kingdoms, not save them. Jon Snow, on the other hand, discovers the Horn of Winter giving him the ability to command the White Walker army and win the Game Of Thrones.

3. The White Walkers Are Actually The Good Guys

What if we’ve had it all wrong, and the White Walkers are actually the heroesof this story? This theory sort of coincides with the one above, which has theWhite Walkers fighting against evil, not for it. Throughout the show we’ve been given little background on the Others, who have little love for humans and are extremely difficult to kill. What if they’re the human race’s only hope?

2. This Was All A Thing Of Legend

The series is called A Song Of Ice And Fire, but what if this song has already been sung? One theory questions whether all of Game Of Thrones is actually a retelling of the past. This has all already happened long ago; it is now the stuff of legend. So the final scene is just someone telling this story of how the Iron Throne was won to a bunch of school-age children. A little anti-climactic, but it would be surprising.

1. The Wall Comes Down

But, after all these years, the show couldn’t end on such a sad note though, right? I’d like to think so, but leaving the throne empty on a show calledGame Of Thrones is certainly a ballsy move. It also falls in line with Martin’s previous comments that the ending will be “bittersweet.” Rock music is dead, or at least it is according to Red Hot Chili Peppers’ bassist Flea. The Californian rocker used an interview on SiriusXM’s Pearl Jam Radio to bemoan the current state of rock, saying it was “a dead form in a lot of ways”. Speaking to Pearl Jam guitarist Mike McCready, Flea recalled his days during the band’s 90s heyday: “I just remember being so excited that we […]