“Isn’t that something…?” Bob Dylan isn’t exactly making a big deal out of being awarded the Nobel Prize for Literature. But at least the 1960s trailblazer is finally acknowledging his becoming the first musician to be granted admission to the world’s most elite literary club.

When I ask him about his reaction to hearing the news a fortnight ago that he is to follow in the footsteps of George Bernard Shaw, TS Eliot, Winston Churchill, William Faulkner, Günter Grass, Ernest Hemingway and Harold Pinter, I have no idea what to expect.

Dylan, now 75, is on tour in Oklahoma, and we had been due to discuss his new exhibition of artworks, depicting iconic images of American landscapes and urban scenes, which opens to the public at the Halcyon Gallery on London’s New Bond Street next week.

Since it was announced he had been chosen by the Swedish Academy to receive the Nobel, Dylan has made no public reference at all to it, save for a fleeting mention on his own website that was deleted within 24 hours.

More than that, he has also reportedly refused to pick up the phone to speak to representatives of the Nobel committee.

They apparently remain in the dark about whether he will be attending the ceremony on December 10, when he will receive a cheque for £750,000 from King Carl VI Gustaf.

Well, I can put them out of their misery. For when I ask about his Nobel, Dylan is all affability. Yes, he is planning to turn up to the awards ceremony in Stockholm. “Absolutely,” he says. “If it’s at all possible.”

And as he talks, he starts to sound pretty pleased about becoming a Nobel laureate. “It’s hard to believe,” he muses.

His name has been mentioned as on the shortlist for a number of years, but the announcement was certainly not expected. When he was first told, it was, Dylan confides, “amazing, incredible. Whoever dreams about something like that?”

In which case, I can’t help but ask, why the long public silence about what it means? Jean-Paul Sartre famously declined the award in 1964, but Dylan has these past weeks seemed intent on simply refusing to acknowledge its existence, so much so that one of the normally tight-lipped Nobel committee labelled him “impolite and arrogant”.

For his part, Dylan sounds genuinely bemused by the whole ruckus. It is as if he can’t quite fathom where all the headlines have come from, that others have somehow been over-reacting.

Couldn’t he just have taken the calls from the Nobel Committee?

“Well, I’m right here,” he says playfully, as if it was simply a matter of them dialling his number, but he offers no further explanation.

It is over a quarter of a century since I first interviewed Bob Dylan. That was back in 1989, and he started off so reticent that he was monosyllabic.

When I asked him a question about the 1960s, he snapped at me. What I did then was start over and ask all the same questions again. It worked. We ended up doing a two-and-a-half hour interview.

If there is one thing I have learned about him over the years, and the several interviews he has granted me, it is that he always does the unexpected.

Bob Dylan has never made a secret of the fact that he doesn’t like the media. It is two years since he last spoke to a journalist. He does it his way.

So, for all the speculation over the last two weeks about the reasons behind his blanket silence on the Nobel award, I can only say that he is a radical personality – which is why he has remained of so much interest to us over six decades since he first emerged on the Manhattan music scene in 1962 – and cannot be tied down, even by the Nobel Prize committee.

In interviews over the years, the famously unpredictable Dylan has been by turns combative, amiable, taciturn, philosophical, charismatic, caustic and cryptic.

He has seemed intent, most of all, on being fiercely private and frustratingly unknowable. Hence his apparent toying with the Nobel committee cannot be said to have come entirely out of the blue.

Perhaps it is just that he has grown casual about garlands that would send the rest of us into orbit, as he has received so many in the course of his long career in the spotlight, since songs such as Blowin’ in the Wind and The Times They Are a-Changin’ became anthems for the civil rights and anti-war movements of the 1960s.

So does he agree with the Nobel committee, I ask, that his songs belong alongside great works of literature? Sara Danius, permanent secretary of the Swedish Academy, for example, has linked Dylan’s contribution to literature with the writers of ancient Greece.

“If you look back, far back, 2,500 years or so,” she has said, “you discover Homer and Sappho, and they wrote poetic texts that were meant to be listened to, they were meant to be performed, often together with instruments, and it’s the same way with Bob Dylan. But we still read Homer and Sappho… and we enjoy it, and same thing with Bob Dylan. He can be read, and should be read.”

Dylan treats her words with a certain hesitation. “I suppose so, in some way. Some [of my own] songs –Blind Willie, The Ballad of Hollis Brown, Joey, A Hard Rain, Hurricane, and some others – definitely are Homeric in value.”

He has never, of course, been one to explain his lyrics. “I’ll let other people decide what they are,” he tells me. “The academics, they ought to know. I’m not really qualified. I don’t have any opinion.”

On the associated question of whether those same lyrics can be considered poetry, Dylan has long delighted in publicly changing his mind.

At heart, he just likes to remain beyond reach. He is as elusive over the question of religion as he is over his songs. Born Jewish, in the late 1970s he released two Christian-themed albums that appeared to suggest he was born-again, but followed them by holding his eldest son Jesse’s bar mitzvah at the Western Wall in Jerusalem, the holiest of Jewish sites. (In total, Dylan has six children from two marriages.)

This refusal to explain extends to other aspects of his creative work. Dylan has been working as a visual artist, in tandem with his music, he explains, since the 1960s. “I’m not obsessed with painting,” he laughs. “It’s not all I do.”

But news of his Nobel Prize for Literature has coincided with the opening at London’s Halcyon Gallery of The Beaten Path, a new exhibition of his watercolours and acrylics – his fourth at the Mayfair venue since 2008.

Is there a parallel between song-writing and painting?

“There’s a certain intensity in writing a song,” he replies, “and you have to keep in mind why you are writing it and for who and what for,” he says. “Paintings, and to a greater extent movies, can be created for propaganda purposes, whereas songs can’t be.”

His artwork has been on walls in museums and in private collections around the world since 2007, but devotees first began noticing his painterly ways when he did album covers for The Band’s Music from Big Pink in 1967, and his own Self-Portraitin 1970.

A book of drawings, 1994’s Drawn Blank, grew into a series of paintings that first went public nine years ago in Germany before travelling to London, Edinburgh, Tokyo and Turin.

He later assembled collections inspired by trips to Asia and Brazil, before Halcyon directors Paul Green and Udi Sheleg suggested he look instead in his own backyard for inspiration. (When he’s not on the road, Dylan lives in Malibu, California.) 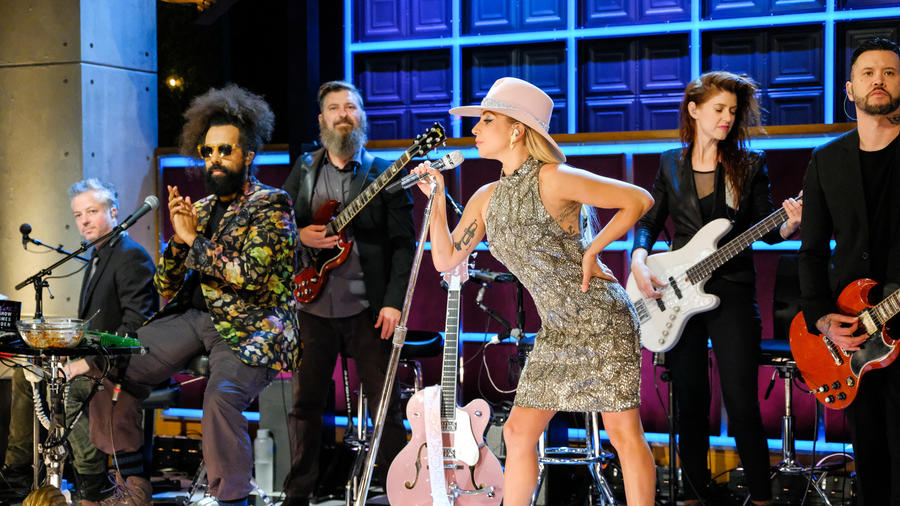 Lady Gaga has a lot of traits that would make her right at home in the midst of a massive Los Angeles traffic jam. She has a propensity for profanity, a love of laying on the horn and a barely functional understanding of how a motor vehicle works. But perhaps most importantly, she knows that if you’re going to sing her songs while in traffic, you better be belting to […]