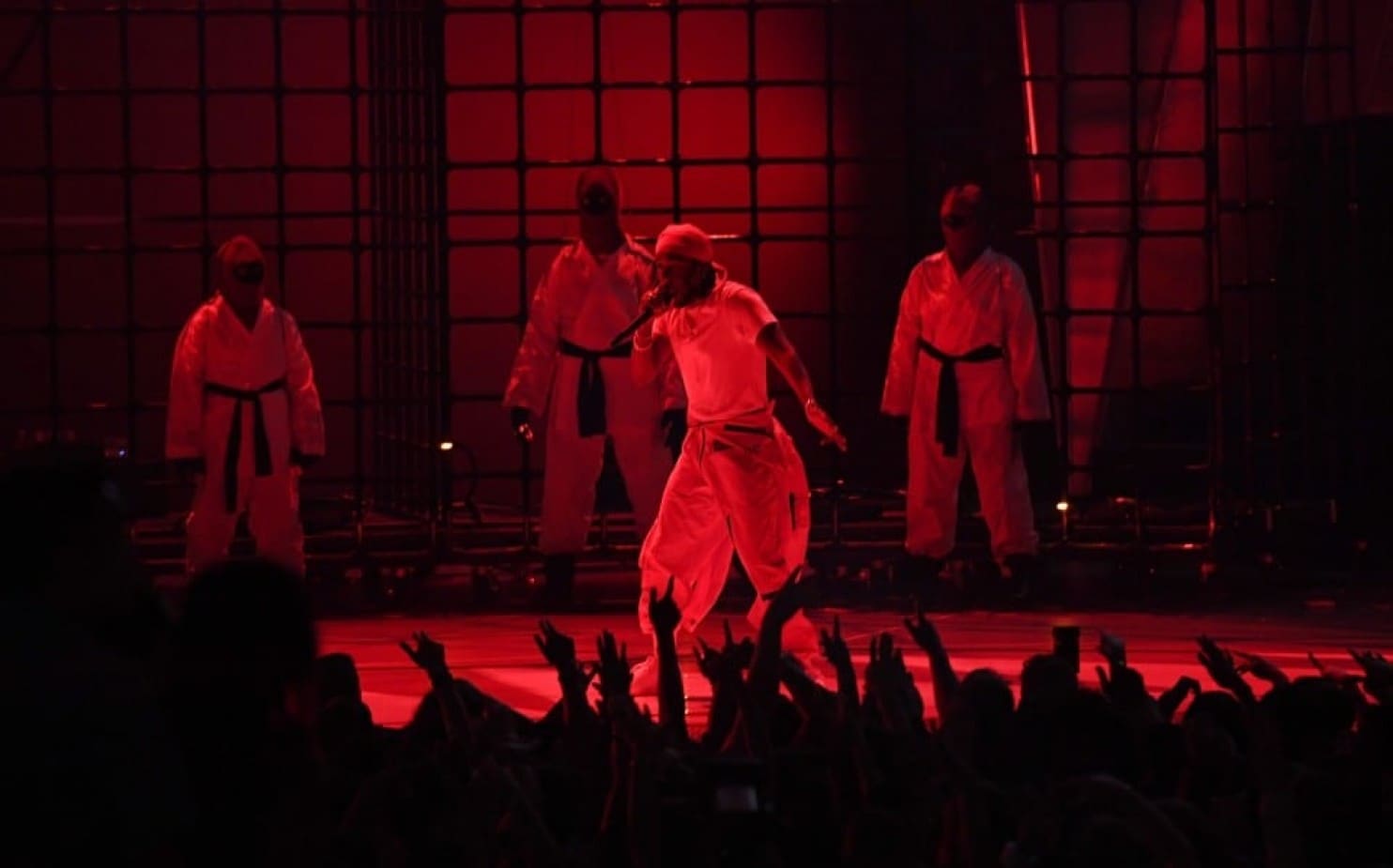 Everyone knows the MTV Video Music Awards are more focused on performances instead of the actual awards, but either way, Kendrick Lamar had a very good night. In addition to kicking off the show with a medley, the rapper walked away with six awards out of a field-leading eight nominations — including the top prize, video of the year for his hit “HUMBLE.”

A complete list of nominees and winners is below — here’s everything else to know from the show, hosted by Katy Perry.

* Taylor Swift finally got to fire back at her critics

The pop star earned a lot of backlash recently, and apparently while she’s been out of the spotlight, she’s been taking careful notes — the music video for her new single, “Look What You Made Me Do,” debuted Sunday night, and addressed nearly every insult hurled her way over the past year.

The music video for Taylor Swift’s new single “Look What You Made Me Do” premiered at the 2017 VMAs. It’s a self-deprecating look at how people make fun of her, peppered with many references to her life. (Nicki DeMarco/The Washington Post)

Bennington, the 41-year-old Linkin Park frontman, died last month; his death was ruled a suicide. Leto, actor and lead singer of 30 Seconds to Mars, paid tribute to his friend.

“When I think about Chester, I see his face, which was always smiling. I think about his heart, which he wore on his sleeve … at once ferocious and delicate, that voice will live forever,” Leto said. “If there is anyone out there who is watching this tonight, who feels like there is no hope, hear me now. You are not alone. There is always a way forward. Reach out, share your thoughts, do not give up, and, I promise you this: the absolute biggest breakthroughs in life lie just beyond the darkest days.”

Bro, the mother of the 32-year-old woman killed in Charlottesville when a car slammed into people protesting a white supremacy rally, announced a foundation in her daughter’s name. She was introduced by the Rev. Robert Lee IV (a descendant of Civil War general Robert E. Lee), who said, “We have made my ancestor an idol of white supremacy, racism and hate. As a pastor, it is my moral duty to speak out against racism.” Celebrities mostly stayed away from current events. Yet presenter Paris Jackson, the 19-year-old daughter of Michael Jackson, didn’t hold back, urging the audience to speak out against hate.

“Let’s leave here tonight remembering that we must show these Nazi white supremacist jerks in Charlottesville and all over the country that as a nation with liberty as our slogan, we have zero tolerance for their violence, their hatred, and their discrimination,” she said. “We must resist.” Stricken with the flu, Lorde didn’t want to bail on the VMAs — and when she performed “Homemade Dynamite,” she didn’t sing, but instead did an elaborate dance routine that involved lots of jumping and falling to the ground. Unclear whether she would have done the same thing if she wasn’t sick.

Celebrities mostly stayed away from current events. Yet presenter Paris Jackson, the 19-year-old daughter of Michael Jackson, didn’t hold back, urging the audience to speak out against hate.

“Let’s leave here tonight remembering that we must show these Nazi white supremacist jerks in Charlottesville and all over the country that as a nation with liberty as our slogan, we have zero tolerance for their violence, their hatred, and their discrimination,” she said. “We must resist.”

Stricken with the flu, Lorde didn’t want to bail on the VMAs — and when she performed “Homemade Dynamite,” she didn’t sing, but instead did an elaborate dance routine that involved lots of jumping and falling to the ground. Unclear whether she would have done the same thing if she wasn’t sick.

* A message to Texas

About 38 minutes into the show, Perry mentioned the horrific hurricane in Texas. “All of us here at the VMAs are sending love to the people of southeastern Texas and everyone affected by Hurricane Harvey right now,” she said, directing everyone to donate to the Red Cross. “We are praying for your safety and the days to come, and we stand with you as you rebuild because we’re all in this together.” * The ghost of Camilla Cabello

Maybe not her actual ghost, though her former band members in Fifth Harmony (from whom she had a notably chilly departure) weren’t too subtle when a mysterious fifth person plummeted off the stage at the beginning of their performance of “Angel” and “Down” with Gucci Mane.

Shade? Fifth Harmony Had a Fake Camila Cabello Thrown Off the Stage at the MTV #VMAs https://t.co/QbEKGAboZq pic.twitter.com/MIGSAcmuGy

The VMAs repeatedly touted a tight race between 19-year-old Khalid and 23-year-old Julia Michaels for new artist of the year; Khalid, who said on the red carpet that he wrote his first song less than two years ago, picked up the prize and excitedly thanked his mom.

Meanwhile, Michaels got a performance slot, though her time on the broadcast was cut off as MTV promoted Swift’s new video and other upcoming celebrity cameos — and Michaels’s fans weren’t happy.

Pink performed a medley of hits (“So What,” “Just Give Me a Reason,” “Raise Your Glass,” etc.) followed by a touching speech. Recently, she said, her 6-year-old daughter announced, “Mama, I’m the ugliest girl I know. I look like a boy with long hair.” Shocked, Pink tried to explain to her daughter about beauty standards, saying that people often criticize her for looking masculine and “too strong.”

“Whatever you are going through, however dark it may seem, there is an undeniable truth and strength in the fact that you are not alone,” Kesha said, introducing the song by Logic, featuring Alessia Cara and Khalid.

As the New York Post points out, 10-month-old Asahd’s outfit probably costs more than your rent.

I’m calling it: @djkhaled‘s son will be ALL OVER the best dressed lists pic.twitter.com/amVVQH5Y9e

Antonoff, the lead singer of Bleachers, might have been the only person who found a banana somewhere at the VMAs. However, he was definitely not the only one skeptical of Perry’s deeply unfunny opening skit.

Jack Antonoff bored and eating a banana during Katy Perry’s intro is all of us watching this intro. #VMAs pic.twitter.com/QXgE3H3VIM

SONG OF THE SUMMER 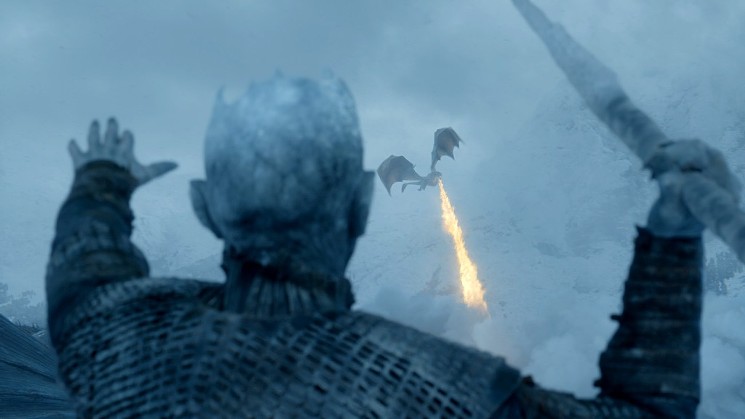 Who Will Die In ‘GOT’ Season 7 Finale? Character Survival Odds

With the "Game of Thrones" Season 7 finale already upon us, and officially only one season left of the mega-hit HBO series, fans are prepared to say goodbye to more than a large share of characters as the show marches to a conclusion. Sadly, that does mean some characters, both beloved and hated, will not make their way to Season 8. Though Season 7 of the series has been full […]