U2 Pays Tribute To Terror Victims At Paris Concert 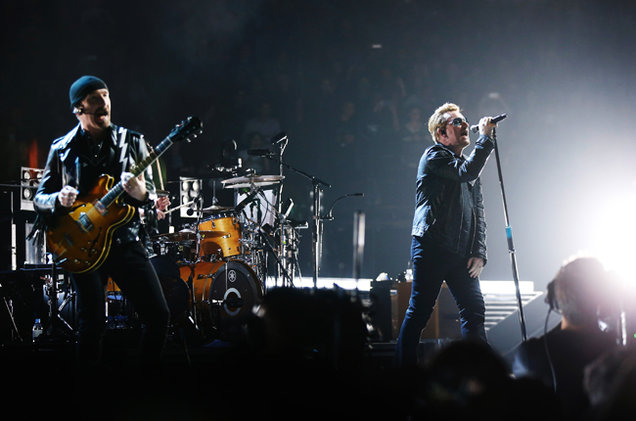 U2 were supposed to play two shows at AccorHotels Arena in Paris last month, but they both ended up getting postponed in the wake of the tragic terrorist attacks. This weekend, however, the band returned to Paris, and they performed the first of the two concerts tonight. They honored who lost their lives by displaying the names of the dead in the shape and colors of the French flag with a peace sign overlaid on it. “We stand together with the families who lost their loved ones in Paris,” Bono said, as the Irish Independent reports. “We stand together with families in San Bernardino. We stand together with families in Beirut and Istanbul. We stand together before those with false ideologies of the god they serve.” Contrary to some reports before the concert, U2 were not joined onstage by Eagles Of Death Metal — although that might still happen at tomorrow’s show — but they were joined once again by Patti Smith, who performed her songs “Gloria” and “People Have The Power” with the band. Watch their performance and see the tribute to Paris below.

Idianapolis Colts owner Jim Irsay offered the winning bid of $2.2 million on Friday for the iconic Ludwig drum set that Ringo Starr played on 180 of the Beatles' studio recordings and more than 200 of their live performances at an auction to benefit the Lotus Foundation started by Starr and his wife, actress Barbara Bach. Overall the auction brought in nearly $10 million according to a spokeswoman for Julien's […]